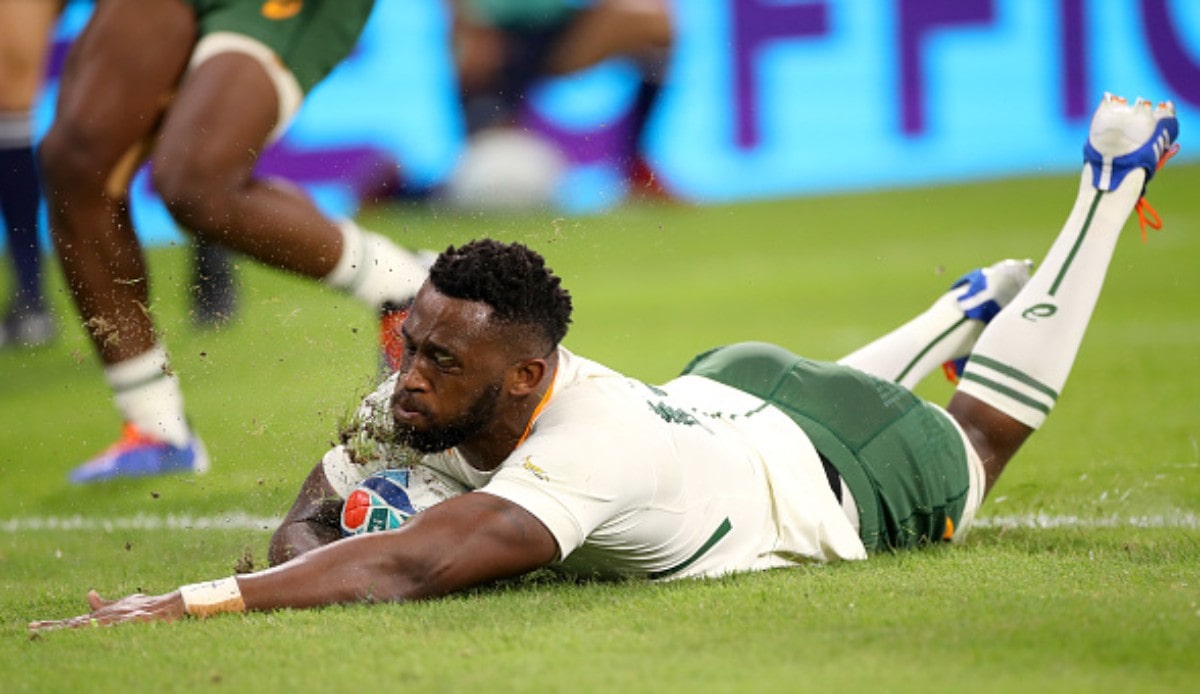 South Africa have seen off Namibia 57-3 in what was an impressive performance in Pool B of the Rugby World Cup in Japan.

Tries from Francois Louw, Schalk Brits, Lukhanyo Am, Warrick Gelant, Siya Kolisi and braces for both Bongi Mbonambi and Makazole Mapimpi saw South Africa rack up the biggest score of any team so far in this year’s tournament.


The Springboks started the game at a blistering pace and camped within the Namibian 22, as the penalties began to build up in the early stages.


South Africa’s pack showed its dominance winning a scrum against the head and dominating another couple before kicking to touch where they won the line-out and drove over through hooker Mbonambi. Jantjies adding the extras to make it 7-0 after 10 minutes.


Five minutes later and the Boks were in again through a similar tactic as Louw barrelled his way over the line. Jantjies was unsuccessful with his conversion this time around.


Things got worse for Namibia a minute on as No 8 Adriaan Booysen was sin-binned for a deliberate knock-on.


The Springboks took full advantage and flurry of scoring continued with Mbonambi going over for his second try of the game with only 17 minutes on the clock from another line-out maul. This time Jantjies was perfect from the tee to stretch the lead out to 19-0.


Namibia got on the board through the boot of Cliven Loubser, from a penalty.


However, the Boks secured their bonus-point on 26 minutes as Gelant ran through the defence before passing out left to Mapimpi, who raced over for a try in the corner. Jantjies mixed kicking continued as he clipped the ball off the right post with the conversion and wide keeping the score at 24-3.


The Namibians looked the better of the two sides over the next ten minutes but failed to make that advantage count. Instead it was the Boks who finished the half on a high as some beautiful handling in open play led to captain Schalk Brits offloading to Am beside the line and the centre waltzed over for the score. Jantjies slotted the conversion over to leave it at 31-3 come half-time.

It took only eight minutes for South Africa to record their opening try of the second-half, with a lovely Boks break ending with Gelant getting the final touchdown. Jantjies converted the kick from the right-hand side to extend the lead.


Mapimpi got over for his second try five minutes on from a wonderful move off a line-out as he received the ball on the inside shoulder and sprinted through a gap in the defence to score. Jantjies converted once more.


Another five minutes on and substitute Kolisi was in for a try as the Boks spread the ball wide for him to walk in for an easy five-pointer. Jantjies missed another conversion, but the Springboks were up to 50.


On 63 minutes things got from bad to worse for Namibia as replacement prop Johan Coetzee was sin-binned for obstruction and from the resulting penalty Brits got in on the try scoring act from a maul. Jantjies made it 57-3 with the conversion and that was the final score of the game as the intensity died down as the match game to a close.


The win sees the Boks bounce-back from their 23-13 loss to the All Blacks last weekend and puts them back on course in their attempt to reach the last eight of the tournament.


Next up for the Springboks is a crucial clash against Italy on Friday, who currently sit top of the pool, while for Namibia things only get harder as they take on the All Blacks next Sunday.