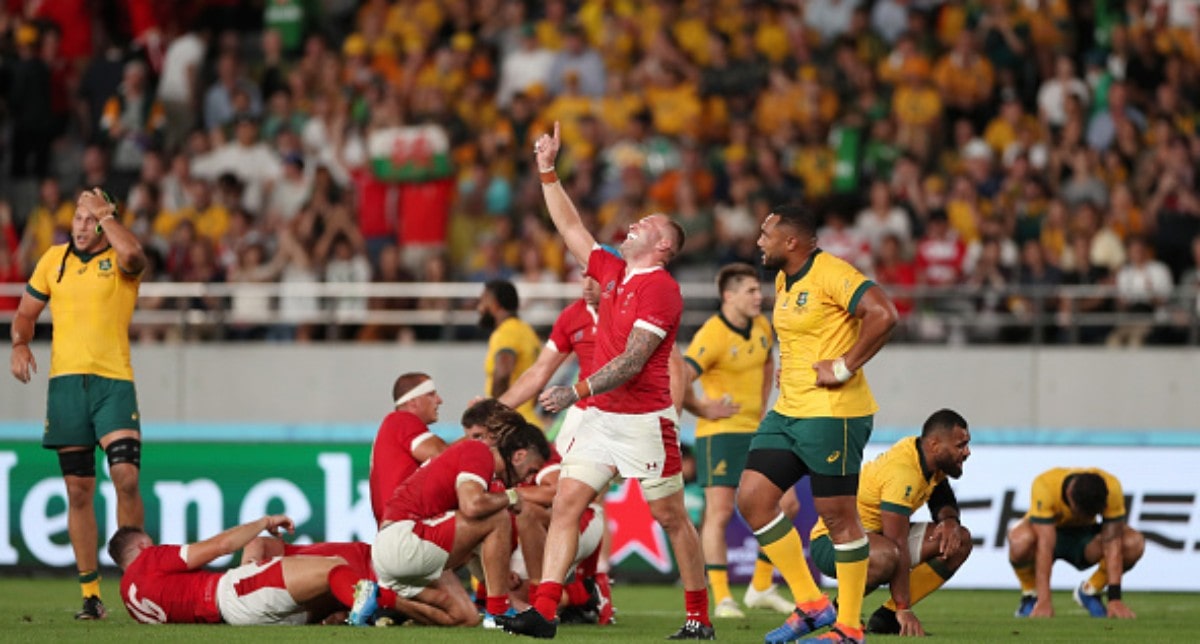 Wales narrowly defeated Australia 29-25 this morning as they now look set to finish top of Pool D at the Rugby World Cup in Japan.

A dominant first half performance with tries from Hadleigh Parkes and Gareth Davies either side of an Adam Ashley-Cooper five-pointer saw them build a healthy lead. However, the Wallabies just fell just short with a comeback with tries from Dane Haylett-Petty and Michael Hooper second-half pushing the Welsh all the way but it was not enough in what was an incredible game.


Wales had a perfect start to the game as they turned the ball over straight from kick-off and after a couple of phases the ball was spun back to Dan Biggar who slotted over a brilliant drop-goal to make it 3-0 after less than 40 seconds.


Things got better for the men in red in 13 minutes in as they took the ball into the Wallabies 22, and after being given a penalty advantage Biggar sent a cross-field kick over to the right-hand touchline where Parkes climbed highest to claim the ball and touchdown. Biggar converted beautifully from the angle to make it a 10-point game.


Eight minutes later and the Wallabies gave the Welsh a taste of their own medicine as they burst into the 22, and with an advantage on their side Bernard Foley sent a cross-field kick towards their right which Ashley-Cooper collected to go over for the Aussies first points. Foley failed to add the extras leaving it at 10-5 to Wales.


Just before the half-hour mark Biggar went off for a HIA, while the Wallabies cut further into the lead courtesy of a Foley penalty just to the left of the posts outside the Welsh 22, making it a single score game at 10-8.


Rhys Patchell, on for Biggar, pushed the Welsh further ahead a couple of minutes later with a finely struck penalty from outside the Aussies’ 22 near the right-hand touchline.


Five minutes later and Patchell slotted another penalty to give them a 16-8 advantage.


Less than a minute on and they were further ahead as scrum-half Gareth Davies intercepted a Will Genia pass from the back of a maul in the Welsh half and out ran everyone to put the ball down for a brilliant try. Patchell added the extras to give Wales a 23-8 lead going in at half-time.

The first score of the second-half went to Wales and much like in the opening half it was another drop-goal, this time Patchell was on hand to knock over from outside the 22.


However, the Wallabies hit back straight away with some brilliant handling leading to full-back Haylett-Petty diving over for a well-worked try. Substitute Matt To’omua converting to make it 26-15 with just over 30 minutes to go.

The next 15 minutes were all about Australia and after camping in the Welsh 22, winning penalty after penalty, they eventually got the try they deserved through captain Hooper as he barrelled over from close range. To’omua kicked the extra two, to put only four points between them with a little over 15 minutes to go.


Five minutes on and Wales’ lead was cut to just a single point as To’omua kicked a simple penalty from inside the 22.

Wales edged further ahead again when Patchell knocked over a penalty with eight minutes remaining to hand them a 29-25 lead.


The Wallabies went all out for a match-winning try, but Wales held out to secure a vital 29-25 victory in what could go a long way to giving the Welsh the top spot in Pool D.


Next up for the Wallabies is a clash with Uruguay next Saturday, where they will hope to get back to winning ways, while Wales have a long break until they play Fiji on Wednesday the 9th of October as they will hope to continue their push to finish top of Pool D.