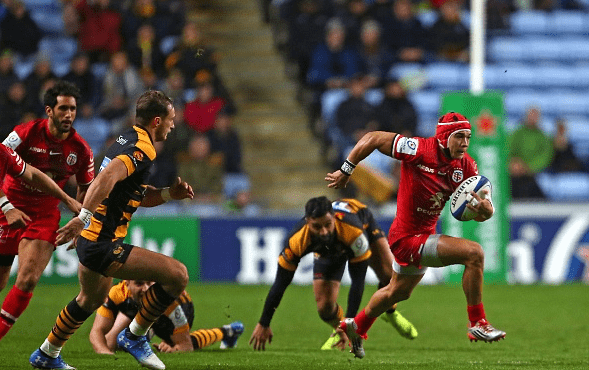 The guys at Sky Sports have pieced together their ‘Team of the Week’ from across both the Champions and Challenge Cup.

The team contains 4 players from the Gallagher Premiership, 9 from the Guinness Pro14 and just the 2 from the Top 14.

Sky Sports – Team of the Week:

#ChampionsCup Try of the round, who gets your vote?

Steve Borthwick has named the Leicester Tigers matchday squad for the European Challenge Cup Final against Montpellier at Twickenham Stadium.

Tom Youngs will captain the side, starting alongside Ellis Genge and Dan Cole in the Leicester front row, with Harry Wells and Calum Green as the second-row pairing.

Cyle Brink is at openside flanker, joining Hanro Liebenberg and Jasper Wiese in the Leicester back row.

“Our fans have been incredibly supportive from afar and we’re pleased they have the chance to enjoy some live rugby in the upcoming weeks, starting on Friday night at Twickenham”

Richard Wigglesworth starts at scrum-half, joining fly-half George Ford as the half-backs for Tigers, and Dan Kelly links with Matías Moroni in the Leicester midfield.

Guy Porter, Nemani Nadolo and Freddie Steward make up an unchanged Tigers back-three from the win over Harlequins last weekend.

Charlie Clare, Luan de Bruin, Cameron Henderson and Tommy Reffell are the forwards on the Leicester bench, with Ben Youngs, Zack Henry and Kini Murimurivalu as the replacement backs.

Speaking about the matchday squad named, Borthwick said: “It has been a squad-wide effort to get to this Final, with more than 40 players representing Leicester Tigers in the European Challenge Cup this season.

“On Friday night, these 23 players have the privilege of representing everyone involved at Tigers, our supporters and Leicestershire.”

Previewing the Final, the Tigers head coach added: “Montpellier are one of the game’s most well-resourced clubs and have invested heavily in building this star-studded squad.

“We know the challenge that awaits us on Friday night at Twickenham and we’re excited for the opportunity at this point on our journey as a squad.”

The Tigers head coach is also pleased that the game will be open to the club’s support for the first time since February last year.

“We haven’t shared a matchday with Tigers supporters for more than a year and are excited that we get that chance again on Friday night,” he said.

“Our fans have been incredibly supportive from afar and we’re pleased they have the chance to enjoy some live rugby in the upcoming weeks, starting on Friday night at Twickenham.

“I’m very pleased our players get the chance to play in front of Tigers fans again after so long.

“In every game we go out to put in a performance that our entire Tigers community is proud of, and that is what I will be asking of the players again this week.”

The starting team sees five changes to the side that featured in the Guinness PRO14 Rainbow Cup opener against Connacht last Friday. Eric O’Sullivan and Marty Moore return to the starting front row, while Rob Herring is retained at hooker. Iain Henderson will captain the side and is joined by Alan O’Connor in the engine room. Matty Rea retains his starting berth at blindside flanker, with Jordi Murphy returning to the openside position, and Nick Timoney completing the base of the pack at Number Eight.

The starting back three remains unchanged; Jacob Stockdale is named at full-back, with Ethan McIlroy and Robert Baloucoune on the wings. Stuart McCloskey comes back into midfield to pair up with James Hume. John Cooney starts at scrum-half with Billy Burns at fly-half.