The Vodacom Bulls secured a gem when they signed talented utility back, Wandisile Simelane, as part of their arsenal going into the 2022/23 season.

The 24-year-old, who seamlessly shows his versatility at centre, wing and fullback, has slotted in like a hand to a glove at Loftus Versfeld since joining the Tshwane-based side in their pre-season preparations. 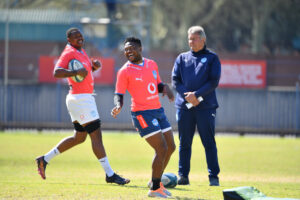 Apart from the warm welcome and the wit of new teammates Cornal Hendricks and Morne Steyn which has stuck out for Simelane, it is the work ethic and high standards that the team has set that has impressed the former Junior Bok star in his few weeks at Loftus.

“It’s been an awesome start for me at the Vodacom Bulls. The guys have really welcomed and embraced me into the team,” reflected Simelane.

“We are all working hard, challenging each other – it’s really refreshing to witness. Andre [Volsteedt, Vodacom Bulls strength and conditioning coach] has been pushing us really hard and we have no doubt that the results will only be positive once we get into the swing of things in-season.”

“Wandi”, as he is affectionately known, is no stranger to the Vodacom United Rugby Championship and Carling Currie Cup where he has produced some stellar performances for his former team, the Emirates Lions. 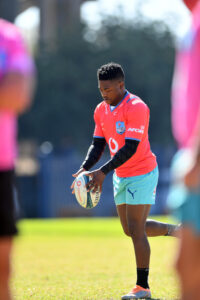 With the excitement of playing in these two competitions, he expressed his eagerness to contribute towards the Vodacom Bulls’ cause and further make an impact in the upcoming inaugural participation in the Heineken Champions Cup.

“I’ve found the Vodacom URC to be quite challenging. It is a different challenge to Vodacom Super Rugby which we were used to. In addition to the different styles of rugby, there is also the cold weather to contend with in the North,” he said.

“We are now also looking forward to playing in the Heineken Champions Cup, which will bring its own new challenges. We are just excited to play top opposition.

“I really can’t tell you how we as a group are excited about the upcoming season. There is also a comforting sense of calmness and confidence in the team which makes it more exciting for me to play with this group of players and play for our coaches to see how far we can go in all competitions.

“I think we would be under-valuing ourselves if our goal was not to win everything – the Vodacom URC, Heineken Champions Cup and Carling Currie Cup. We certainly have the drive, commitment and belief that we can be competitive in all.”

A highlight for Simelane in his move across the Jukskei River is the opportunity to work with a mentor he has long admired – Vodacom Bulls director of rugby, Jake White.

“Coach Jake is widely respected given all that he has achieved as a world-class coach. So, I have no doubts that there is so much knowledge I can gain from a coach of his stature,” said Simelane.

“I did not even think twice when the opportunity to work under him came about. I can only become a better player.”

In addition to focusing on becoming part of the core of the Vodacom Bulls team and contributing to its success, the elusive backline player continues to harbour ambitions of reaching greater heights in his playing career.

“Part of my individual goals is to become a Springbok sooner rather than later. Every rugby player aspires to play for their country, it is no different for me,” he revealed.

“I will strive to do my best in the blue jersey and can only hope that it will be enough to open doors for me to take my career a step further.”