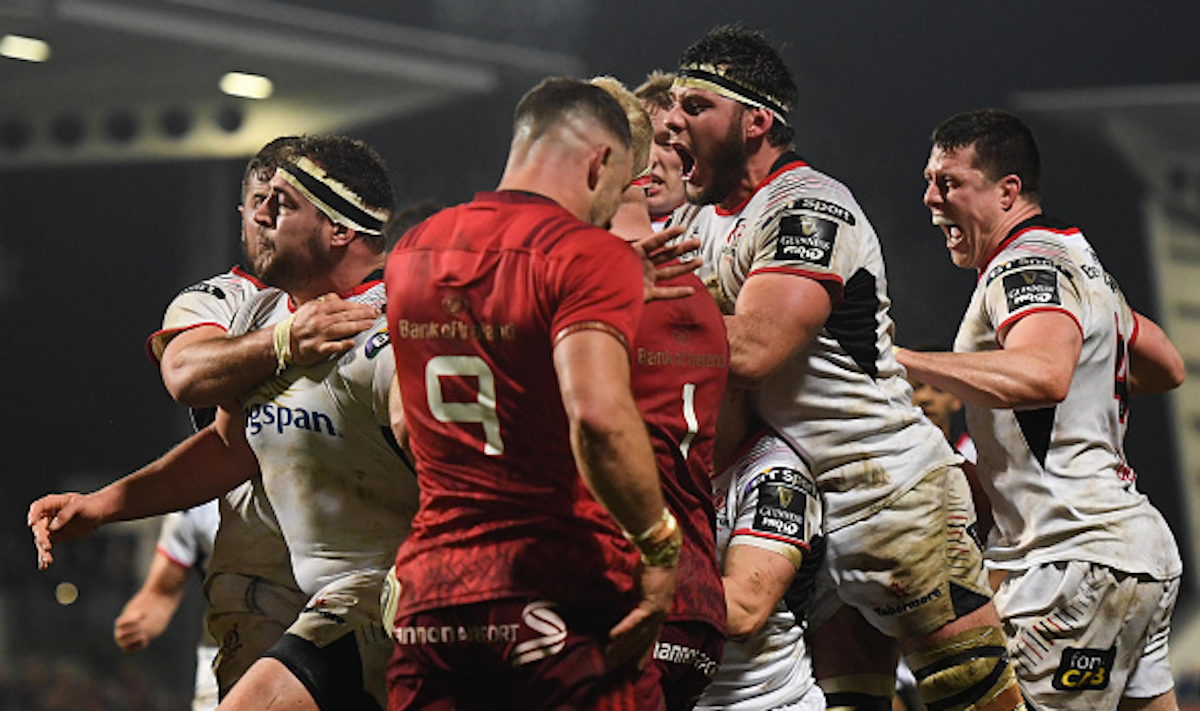 Munster face Ulster at Thomond Park on Saturday evening in the first Interpro derby of the season with the majority of the province’s World Cup players set to return for the clash (5.15pm).

JJ Hanrahan, Alby Mathewson and Chris Cloete keep their places in the side after helping Munster to a bonus-point win away to Cardiff Blues last week as Munster make 12 changes.

Mathewson and Hanrahan continue their half-back partnership with Rory Scannell and Farrell in the centres.

James Cronin, Scannell and Ryan pack down in the front row with Kleyn and Billy Holland in the engine room.

O’Mahony, Cloete and Stander are named in the back row.

Dan McFarland has switched things up with seven changes from the side that defeated Zebre last Friday, Irish internationals Jacob Stockdale and Jordi Murphy will make their first appearances this season.
In the back three, Matt Faddes switches to full-back and is joined by the returning Stockdale and Rob Lyttle on the left and right wings respectively.

Stuart McCloskey is re-called to join last week’s Man-of-the-Match, Luke Marshall in midfield. Angus Curtis will make his first start for Ulster this season at fly-half and is joined by John Cooney at scrum-half, who made his 50th appearance last time out against Zebre.

Among the four changes in the forwards, Marty Moore returns to make his first start of the season at tighthead, joining Jack McGrath at loosehead and captain Rob Herring to make up an all international front row. Sam Carter comes back in to join Alan O’Connor in the second row.

Joining Murphy will be Sean Reidy at blindside, and Nick Timoney switches to assume the number eight position, completing the back row.
In the replacements, Adam McBurney, Eric O’Sullivan, Tom O’Toole, Kieran Treadwell and Matthew Rea will provide forward cover. David Shanahan, Bill Johnston and Robert Baloucoune – who is also set to make his seasonal bow – make up the back-line reinforcements.

Did you know?
Munster are unbeaten in their last 24 home games in all tournaments

Leinster Smash Connacht for Another Win

Munster Rugby and the IRFU are pleased to confirm that Graham Rowntree will be promoted from Forwards Coach to the role of Head Coach from July 1, 2022.

Rowntree will commence the role of Head Coach at the start of the 2022/23 season after signing a two-year deal.

The former England prop made the move to Limerick in October 2019 on completion of his Rugby World Cup coaching duties with Georgia Rugby.

In his third season as Forwards Coach Graham and family have settled well into Limerick life, noting earlier this year, “I have made my thoughts about this club widely known throughout my time so far, and for me and my family it really has been an easy decision, a non-decision if truth be told.

“We’ve put down roots here and have no desire to move anywhere else.”

Working closely with the IRFU, the province will advance with next steps in securing the backroom team that will work with Graham from next season as Head Coach Johann van Graan, Senior Coach Stephen Larkham, and Defence Coach JP Ferreira depart the province at the end of June.

IRFU Performance Director, David Nucifora, commented, “I would like to thank the Munster Professional Game Committee for their work and diligence during this process.

“It is important that Munster have someone who understands the unique history and culture of the club and has the experience to maximise the talent in the squad.

“Graham was very impressive throughout this process and demonstrated he has the capabilities to spearhead the next chapter of Munster Rugby.”

On confirmation of the promotion, Graham Rowntree added, “I am hugely honoured to be taking over the role of Head Coach for a club of this calibre, one that means so much to me and my family.

“We have thoroughly enjoyed every moment here and I fortunately get to work with an incredible group of staff and players who share a common goal each day in striving for success for this club.

“I’ve talked about our fantastic supporters before and again at the weekend we stepped off the bus to a huge red welcome in Exeter. Who doesn’t want to be part of that, that’s special!

“I believe we have the established structures in place with the resources and facilities to match and that it will be a smooth transition for the coaching ticket we assemble in ensuring continued development and success for this club.

“Before then I have a role to complete this season and working closely with Johann, Steve, and JP is the immediate focus and priority for now.”

Commenting on the appointment, Munster Rugby CEO Ian Flanagan said, “Graham’s extensive coaching experience and knowledge for the game makes him the perfect candidate to lead this squad forward.

“With Graham stepping up at the start of the new season it will be a seamless and natural progression from the work that has been carried out to-date.

“For now, we will continue our focus on the remainder of this season with Graham supporting Johann and the coaching staff in achieving our goals.”

The Ulster match-day squad to face Vodacom Bulls at Loftus Versfeld Stadium on Saturday afternoon has been named.

Andrew Warwick will make his 150th appearance for the province as he has been named to start at loosehead prop and will be joined in the front row by Brad Roberts and Marty Moore. Iain Henderson comes into skipper the side at second row, and will partner fellow Irish international, Kieran Treadwell. Jordi Murphy and Nick Timoney come in to start at blindside and openside flanker, with Duane Vermeulen at the base of the scrum at Number Eight.

Mike Lowry is selected to start at full-back, with Ben Moxham and Ethan McIlroy named on the wings. Luke Marshall and James Hume will form the centre partnership while Ian Madigan and Nathan Doak make up the half-back pairing.

The Ulster coaching team has opted for a 6-2 split on the bench, with Tom Stewart, Eric O’Sullivan, Tom O’Toole, Mick Kearney, Matty Rea and Marcus Rea selected as forward reinforcements. John Cooney and Stewart Moore provide the back line cover.