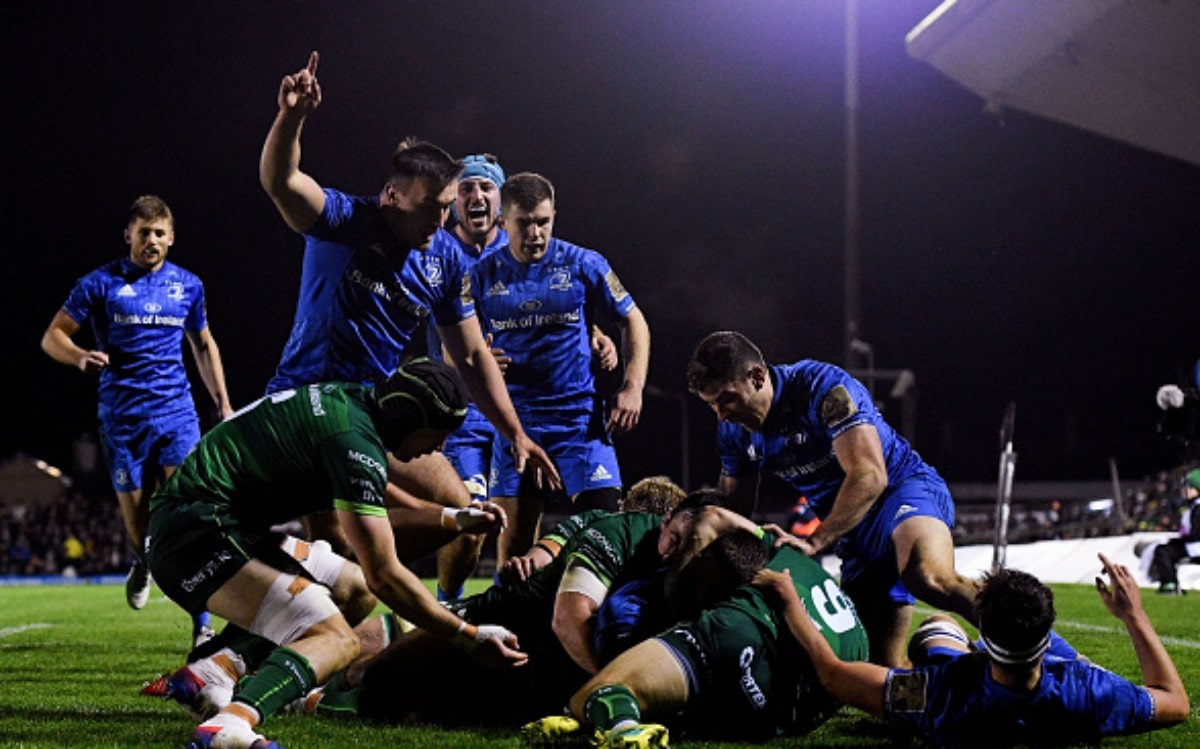 Leinster have made it six wins in a row at the start of the PRO14 season with a 42-11 victory over Connacht at the Sportsgrounds tonight.

A brace of tries from front-rowers Andrew Porter and Ronan Kelleher along with a scores from Ross Byrne and James Lowe saw the reigning champions ease to victory over their western rivals.

The hosts got off to the perfect start, taking the lead four minutes in as returning Irish international Jack Carty knocked over a penalty to make it 3-0.

However, their lead was short lived as one of Leinster’s returning stars Porter barrelled over from close range to put the boys in blue ahead. Byrne made no mistake adding the extras to make it 7-3.

Just before the quarter-hour mark and the away side were further ahead as they camped in the Connacht 22 before hooker Kelleher finished off some great work from a line-out. Byrne slotted over the conversion to push Leinster 14-3 ahead.

Connacht cut into the lead straight after the restart through the boot of Darragh Leader who kicked their second penalty of the game.

Although their fight-back was shut down right away by Leinster, who again showed their forward power as Kelleher went over with the help of captain Scott Fardy for his second try of the night off another line-out. Byrne made it three from three from the tee to extend the lead once again.

It took only another ten minutes for Leinster to secure the bonus-point as Porter went over for his second try of the game after a TMO check. Byrne knocked over another two-points to give Leinster a 28-6 advantage at the half-hour mark.

On 34 minutes things got even better for the eastern province as Byrne added to his personal tally with a lovely five-pointer of his own, slicing through the defence with a fake-pass before touching down. He converted his own try to stretch the score out to 35-6, which is how it stayed come the half-time whistle.

Both teams came out of the blocks quickly in the second period but it was Connacht who struck first as Carty sent a cross-field kick over to Stephen Fitzgerald on the left-wing and the winger did the rest, racing over for his side’s first try of the game. Carty couldn’t add the extras but it showed great spirit from the hosts.

Leinster put pressure on Connacht over the next 20 minutes, remaining in the opposition 22 for most of it, but they couldn’t find a way over. However, that changed with little over 10 minutes remaining as Lowe intercepted a pass inside his own half and darted to the try-line for his side’s sixth try. Bryne continued his 100% kicking-rate from the tee adding the simple extras in front of the posts.

Connacht tried to get another consolation try but they couldn’t break through a solid Leinster defence as it finished up 42-11.

The win means Leinster remain top of Conference A with 29-points out of a possible 30 at the start of the season, while the loss will be a big disappointment for the hosts who went into the game in good form. Leinster will host Benetton next Saturday in the opening round of this season’s Champions Cup, while Connacht welcome French Top 14 side Montpellier to the Sportsground on the Sunday.

The Ulster coaching team has named the match-day squad to face Emirates Lions at Kingspan Stadium tomorrow evening (7.35pm kick-off), in what will be the first ever meeting between the two sides.

Tickets for the game, priced from £25 for adults and £15 for juniors, are still available at ulsterrugby.com/buytickets.

The starting XV is unchanged to the side that defeated Benetton last Friday evening. Will Addison is selected at full-back alongside Ethan McIlroy and Craig Gilroy on the wings. Stewart Moore and James Hume form the centre partnership. Nathan Doak and Billy Burns are named as the starting half-backs.

Andrew Warwick is named in the front row at loosehead with Ulster’s latest double-centurion, Rob Herring at hooker and Tom O’Toole at tighthead prop. Sam Carter will again lead the side, and is paired with Alan O’Connor in the engine room. Matty Rea is retained at blindside, with Nick Timoney at openside and David McCann is named at Number Eight.

Kieran Treadwell makes his return from injury to the forward replacements alongside Brad Roberts, Eric O’Sullivan, Ross Kane and Sean Reidy. Mike Lowry could make his 50th appearance for the province if called upon from the bench. The other back line replacements are David Shanahan and Ben Moxham.