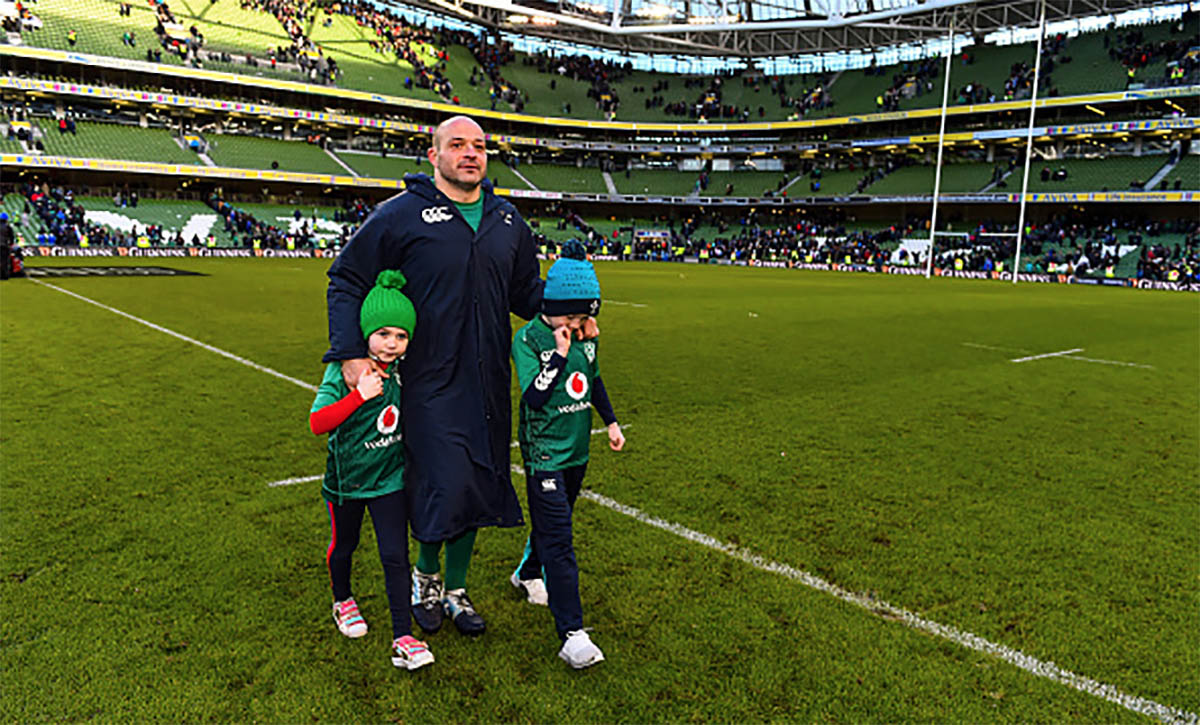 Jonathan Sexton says the Ireland squad are determined can give Joe Schmidt and Rory Best a winning Aviva Stadium send-off when they play in Saturday’s return match (kick-off 2pm).

In addition to Schmidt stepping down as Ireland head coach following the completion of the team’s Rugby World Cup campaign in Japan, 37-year-old captain Best will also bring his illustrious playing career to an end.

Both men have made enormous contributions to Irish Rugby, most notably the Grand Slam success of 2018. Schmidt and Best were also at the coalface for the back-to-back Championship triumphs of 2014 and 2015, while the Ulster hooker was also part of the squad that previously earned Grand Slam honours in 2009.

Sexton was a European Cup champion under Michael Cheika in the same year, before New Zealander Schmidt guided Leinster to subsequent Heineken Cup victories in 2011 and 2012.

“It will be (significant), for him (Schmidt) and Rory,” said Sexton, previewing this weekend’s warm-up encounter with Wales. “Rory is someone who has been there with Joe through all those games. We need to narrow the focus down to the Wales game in terms of what we have to do preparation-wise to build in towards Scotland.

“But in the back of our minds, when you talk about people that have had an impact on Irish Rugby, I’m not sure any coaches would go on the list. It would all be players and Rory would jump onto that playing list for his captaincy and for his playing for over 100, whatever (caps) he’s got now. I keep losing track!

“Joe, impact-wise. with Leinster to start off and with Ireland, has been phenomenal. Records speak for themselves. To do what he did in Leinster, we got to six finals in three years, we won four of them and to go on with three Championships with Ireland.

“Then also the special games where we’ve done things for the first time. We’ll miss him in terms of what he brings, what he has brought. We’ve got to have that in the back of our mind but again, he’ll drive it.”

This will be the third World Cup for Sexton in an already memorable international career. In contrast to the 2015 tournament when a series of injuries played a part in derailing Ireland’s campaign, it is felt there is greater depth to the squad this time around.

While Sexton cannot definitively say yet if this is the best assembled group of players Ireland has ever sent to a World Cup, he believes the game has evolved rapidly since his debut tournament in 2011.

“It’s hard to compare. Even when you look at those 2011 games, it’s like a different game almost. In a short period of time the game just moves on so it is very hard to compare squads. There is good strength in depth there now.

Amongst a host of experienced faces, 19 players in the final squad of 31 will be appearing at a Rugby World Cup for the first time. The most recent debutant within the ranks is Munster lock Jean Kleyn, who made his international bow in last month’s GUINNESS Summer Series victory at home to Italy.

Having sat out the three warm-up fixtures to date, Sexton is yet to line out alongside Kleyn in a green shirt. Nonetheless, he has gotten a glimpse of what the towering second row can bring to the set-up.

“He’s working hard, the same as all of us. It’s a hard environment to come in to because there is a lot of detail, as there is in any international camp. It’s particularly hard here with the level of detail we go into and often it takes guys a couple of games to find their feet, to get used to the system. I’m sure he’ll get better from here on in.”

After watching on from the outside up until now, Sexton is expected to return in the green jersey this weekend. Despite acknowledging how disappointing the performance against England was, the Dubliner is confident that Schmidt’s men can continue to build leading into their World Cup Pool A opener against Scotland on Sunday, September 22. He added:

It’s very hard to comment on games you weren’t involved in, in my position. The guys obviously started well against England for 30 minutes, 10-8 up, I think. And then things just unravelled from there. Soft tries, good play by England and then suddenly we are chasing our tail and you’ve got a level of exhaustion after a tough week in Portugal. 33 degrees or whatever it was there.

“It’s tough on the guys, but that’s exactly why we had that game. It was probably the end of England’s preparation but the start of ours for some guys and it’s just important that we keep building now.

“Not listen to too much other than what is being said in the environment. Keep building and hopefully we see another step forward this week like we did last week, and keep building for that Scotland game.”

Related Topics:6 NationsEnglandFeaturedIrelandItalyJapanLeinsterMunsterScotlandUlsterWales
Up Next

Wales name side to Face Ireland in Dublin

That means that teams only have between now and then to better their current rankings and move into a different drawing band, whereas for the previous draw they had 18 months to improve.

Speaking on the announcement World Rugby chief Bill Beaumont is excited to discover the fate of the teams and has put the pressure on teams to do well this year.

“The pool draw is an important milestone on the road to Rugby World Cup 2023 in France as it really drives excitement and momentum both in the host nation and throughout the global rugby family – it is the moment teams and fans can start to plan. With the World Rugby rankings determining the bands for the RWC 2023 pool draw, it promises to be a fascinating year of men’s international rugby with every match counting towards seeding at the end of the November Test series,” he said.

However, the twelve teams that are already involved will have to be at their best to move up a band in the current rankings or fear dropping down in which case they could get a harder draw.

As of this moment the first band contains the World Cup semi-finalists from last year in South Africa, England, New Zealand and Wales, with the remaining quarter-finalists making up band two in Ireland, Australia, Japan and France.

While in band three Scotland and Argentina are joined by Italy and Fiji.

It will be a tough task for teams to improve their current standings with the Six Nations teams only having one edition of the tournament to improve compared to the two editions they had last time around, but it does add some extra competition to this year’s fixtures.