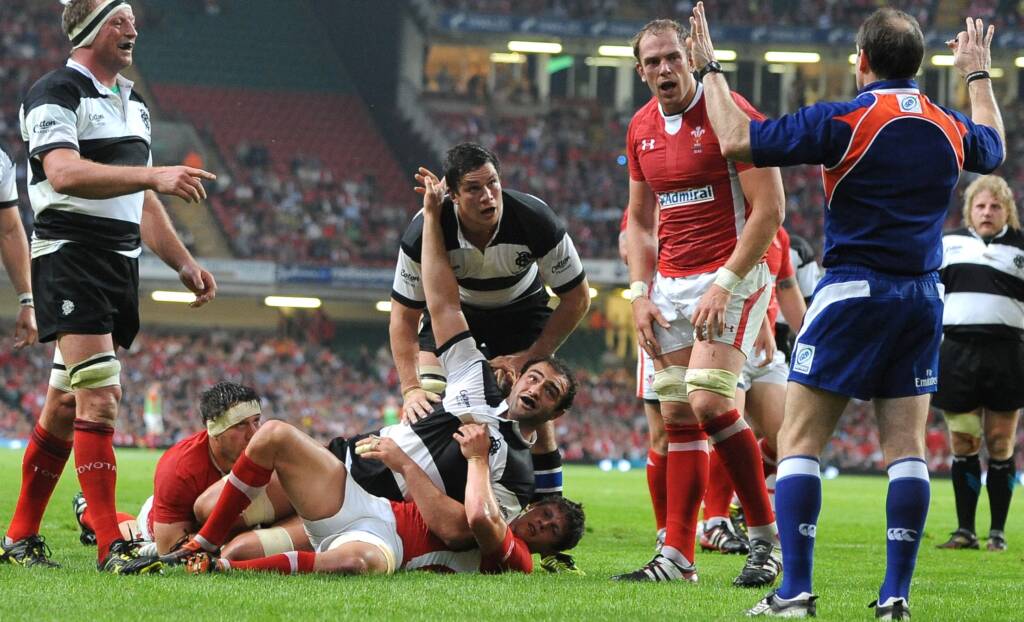 The Toulon and former Montpellier forward won the last of his 71 caps to date against Romania in March, 2017, but has answered a plea for help from head coach Milton Haig after a plague of injuries in the Georgian camp. He is Georgia’s record try scorer with 25 touch downs.

The 35-year-old has already made 11 appearances for the Lelo’s at the 2007, 2011 and 2015 World Cups and at his peak was regarded as one of the best forwards in the world game. He will play in the second row for the Georgians, who are Wales’ first opponents in Pool D in Tokyo on 23 September.

Four years ago he scored tries in the Georgian victories over Tonga and Namibia, and was also named Player of the Match following the 43-10 defeat to New Zealand in Cardiff. Centre Davit Katcharava will also be heading to his fourth World Cup.

Katcharava needs one more cap to go clear of Merab Kvirikashvili as his country’s most capped player. They are both currently locked on 115 appearances, while Sandro Todua, Lasha Malaghuradze, Lasha Khmaladze, Jaba Bregvadze, Giorgi Nemsadze and Shalva Sutiashvili will all be heading to their third tournament.

In total, Haig has included 18 players with previous World Cup experience, but the Kiwi coach has also given youth its chance by including two players who featured in the World Rugby Under 20 Championships in Argentina earlier this year, outside half Tedo Abzhandadze and hooker Vano Karkadze.

Georgia first qualified for the World Cup in 2003 and finished third in Pool C four years ago, having beaten Tonga and Namibia while losing to Argentina and the All Blacks. Haig has opted for a 17-14 split between forwards and backs, with 10 of his squad plucked from Georgia’s domestic top division.


A total of twelve teams will head into the draw as seeds in three brackets with the top four in the rankings being first seeds, meaning as of now Wales would be second seeds along with France, Australia and Japan.


That means that teams only have between now and then to better their current rankings and move into a different drawing band, whereas for the previous draw they had 18 months to improve.


Speaking on the announcement World Rugby chief Bill Beaumont is excited to discover the fate of the teams and has put the pressure on teams to do well this year.


“The pool draw is an important milestone on the road to Rugby World Cup 2023 in France as it really drives excitement and momentum both in the host nation and throughout the global rugby family – it is the moment teams and fans can start to plan. With the World Rugby rankings determining the bands for the RWC 2023 pool draw, it promises to be a fascinating year of men’s international rugby with every match counting towards seeding at the end of the November Test series,” he said.


However, the twelve teams that are already involved will have to be at their best to move up a band in the current rankings or fear dropping down in which case they could get a harder draw.


As of this moment the first band contains the World Cup semi-finalists from last year in South Africa, England, New Zealand and Wales, with the remaining quarter-finalists making up band two in Ireland, Australia, Japan and France.


While in band three Scotland and Argentina are joined by Italy and Fiji.


It will be a tough task for teams to improve their current standings with the Six Nations teams only having one edition of the tournament to improve compared to the two editions they had last time around, but it does add some extra competition to this year’s fixtures.


Last week it was brought down to the final four, with all of them being New Zealand internationals as Carter was pitted up against Beauden Barrett, with Richie McCaw facing Kieran Read.


McCaw and Carter were victorious and now Carter has come out as the overall winner as the best player over the past 10-years.


It is not hard to see why fans have gone for the 112-cap All Black, who finished up his international career in 2015, having guided his country to historic back-to-back Rugby World Cup crowns.


As well as that he holds the title for the most points scored at test-level rugby with an incredible 1598 to his name.


On the international stage he was impressive, but he has been equally so at club-level, winning domestic crowns in both France with Racing 92 and in Japan with the Kobelco Steelers.


The 37-year-old is still under contract with the Japanese outfit, but has been unable to play for them for the majority of the year, having suffered a major injury, which also prevented him from a brief return to Racing 92 for the latter-half of last season.


However, he is poised to return to the playing field shortly and will be hoping to guide his team to further success and will have the aid of another All Black great joining him in the form of Brodie Retallick, who is linking up with the side for the season during his year sabbatical.