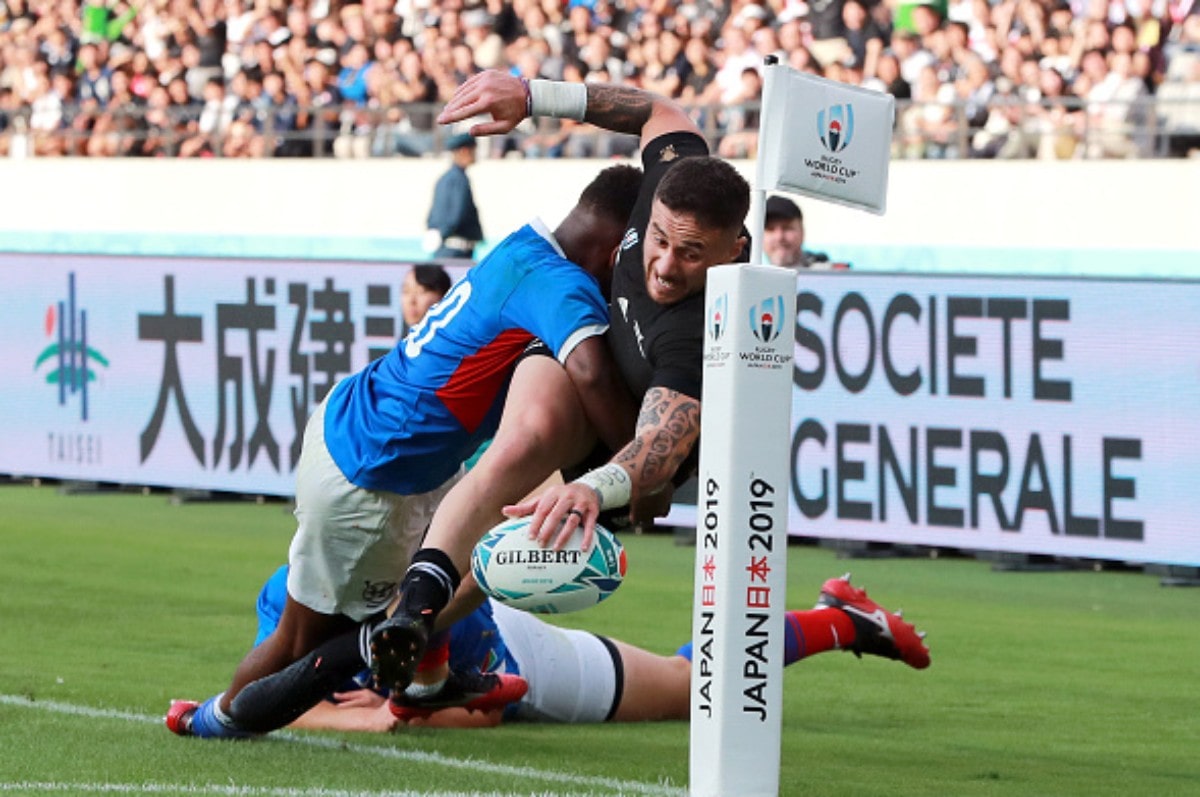 The All Blacks have trounced Namibia 71-9 in another dominant display by the reigning back to back champions at the Rugby World Cup in Japan this morning.

It was Namibia who got off to a brighter start and were ahead after three minutes when Damien Stevens slotted over a beautiful long-range penalty close the the left-hand touchline.

However, the All Blacks hit back and were in for their opening try of the day on seven minutes as Barrett sent over a lovely cross-field kick to the right-hand side near the Namibian line where Reece simply caught the ball and touched down. Barrett couldn’t add the extras with the conversion.

Namibia had a couple of good chances and held the All Blacks out until the 21st minute, but they couldn’t keep out Lienert-Brown, who broke through the opposition defence, raced toward the line, held off a couple of tackles to score their second five-pointer of the game. Barrett skewed the kick to the right of the posts leaving it at 10-3.

The minnows were refusing to give up and by the half hour mark they were back within a point of the back to back World Cup champions as Stevens kicked a further two penalties as they put some serious pressure on New Zealand.

On 31 minutes the All Blacks were reduced to 14-men as prop Nepo Laulala was handed a yellow-card for a dangerous tackle.

Despite being down a man it was the men in black that struck next as replacement front-rower Ta’avao finished of 12 phases beside the Namibian line by barrelling over near the posts. This time Barrett made no mistake with the conversion to stretch their advantage.

The All Blacks secured the bonus-point with the final play of the half as they finished off a set-play in the Namibian 22 by sending the ball out to Smith, who darted through a gap in the defensive line to score his side’s fourth try of the match. Barrett added the extras to leave it at 24-9 come the half-time whistle.

It took only two minutes of the second-half for New Zealand to register their fifth try with prop Moody powering over the line from a quick pick and go from a ruck. Barrett kicked the extra two to make it 31-9.

Five minutes later and Lienert-Brown was in for his second of the game after a brilliant break from Barrett inside his own half, where he raced forward before a one-two with Jack Goodhue, and then a simple pass to Lienert-Brown who scored in the corner. Barrett sent a fantastic conversion over from the right-touchline.

Another five minutes further and New Zealand sent the ball from the left hand side of the pitch to the right, with some great depth in the attacking line, with the ball eventually finding its way to Reece who charged forward before stepping inside and over the line for his second try. Barrett converted once more to give the All Blacks a 45-9 lead with just under 30 minutes remaining.

With 56 minutes on the clock captain Whitelock cleverly touched the ball down off the base of the post for his team’s eighth try with Barrett smashing over the easy kick as Namibia began to show signs of tiredness.

Eleven minutes later and Leinert-Brown was centre of another brilliant move in open-field, bursting through the defence, and while being tackled he offloaded beautifully to Smith, who got over for his brace in the left-corner. Barrett pinned the conversion to make it a 50-point margin.

New Zealand were reduced to 14-men once again when substitute prop Ofa Tuungafasi was shown a yellow card for a similar tackle to Laulala.

Despite being a man down the All Blacks got their tenth try with four minutes remaining through Barrett, as he made an unstoppable run close to the line to get over. He converted his own try to make it 66-9.

With little over a minute left in the game New Zealand showed some incredible skill as they broke down the left-wing, with replacement scrum-half Brad Weber producing an outrageous  behind the back offload to fellow sub Perenara who finished superbly in the corner. Barrett failed to convert as the match ended 71-9.

New Zealand will now hope to end their pool stage campaign with a 100% record when they take on Italy next Saturday, while Namibia will be looking for a first win at the World Cup when they face Canada the following day.