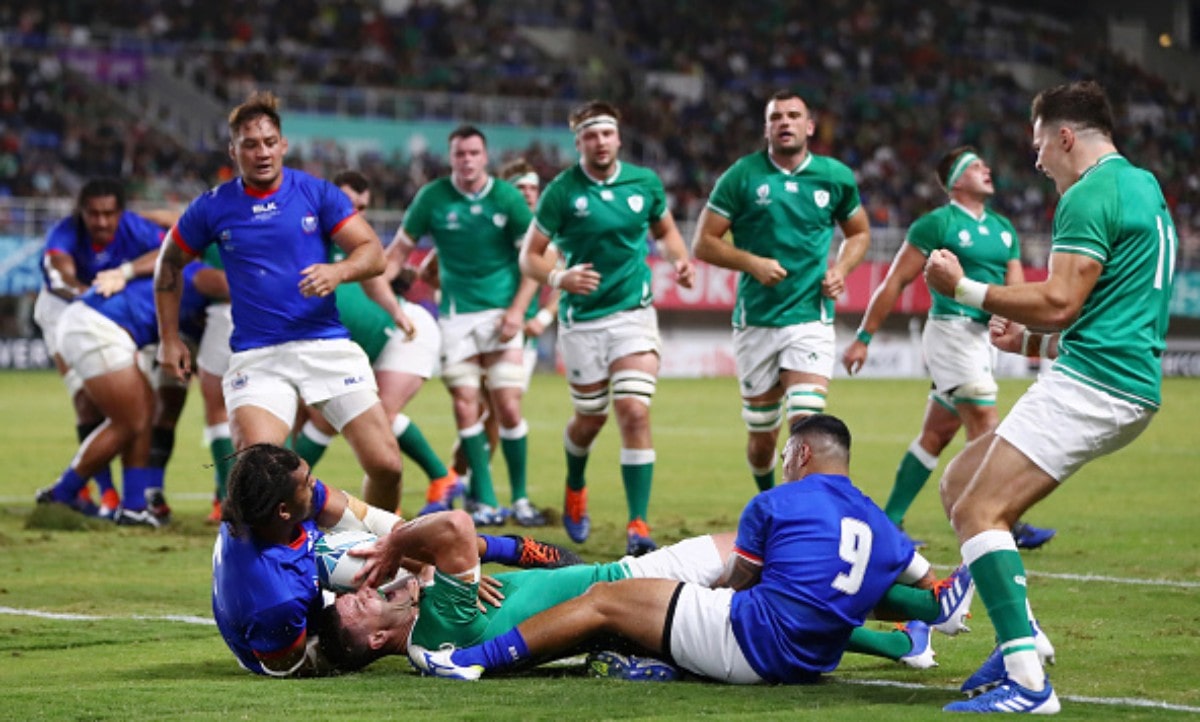 Ireland have ensured a quarter-final place at the Rugby World Cup in Japan with a 47-5 win over Samoa this afternoon in Pool A.

Ireland went into the match needing a bonus-point to secure a last eight place and a brace of tries from Johnny Sexton along with touchdowns from Rory Best, Tadhg Furlong, Jordan Larmour, CJ Stander and Andrew Conway saw the Irish get the job done despite an early red card to Bundee Aki.

Ireland got off to a flying start and from a line-out maul captain Best was bundled over in the right-corner within the opening four minutes. Sexton slotted over the conversion to make it 7-0.

Two minutes later and things got worse for Samoa as hooker Seilala Lam was shown a yellow-card for a high-tackle on Jacob Stockdale.

The men in green took advantage of the extra man with Furlong receiving the ball close to the line and showing incredible power to barrel through a number of players to touch down. Sexton was perfect from the tee again as they made the most of their earlier dominance.

It was the fly-half who added the third try of the match for his side with Jordan Larmour making a lovely break through the Samoan defence before passing the ball to Sexton who made it over the line for the five-pointer. He converted his own score to make it 21-0 after 21 minutes.

Five minutes later and Samoa got their first points of the game as captain Jack Lam powered over from close-range following a line-out, however, the extras were missed leaving it at 21-5.

Ireland were reduced to 14 men two minutes after the try as centre Aki was shown a controversial red card for a high tackle on Ulupano Seuteni who seemed to fall into the tackle but it left the Irish a man down with over 50 minutes remaining.

However, despite their numerical disadvantage Ireland secured the bonus-point they needed as they had a five-metre scrum near the left-hand touchline from which they went down the short-side through Sexton who raced over for his second of the game. This time around he couldn’t add the extras but it left it at 26-5 going in at the half-time whistle.

The Irish side came out all guns blazing in the second-half, putting Samoa under a huge amount of pressure as Ireland camped in their 22, winning penalty after penalty.

After being held up on a couple of occasions Ireland continued to batter the defensive line before Conor Murray sent a beautiful skip pass out to Larmour on the right-wing who just simply had to tap the ball down. Sexton knocked over the kick in what was his final piece of action before being taken off.

Just under the hour mark and Samoa were reduced to 14 once again as TJ Ioane was sent to the sin-bin for conceding multiple penalties as Ireland continued to stay in the Samoan 22.

Five minutes on and Ireland finally made their pressure count as Stander drove over from close-range with Peter O’Mahony on his shoulder to help bundle him onto the line to ensure they got try number six. Joey Carbery knocked over the extras to stretch the lead out to 40-5.

With 10 minutes left Ireland were in once again as Carbery produced a wonderful grubber kick through the opposition 22 which Conway darted onto to tap the ball down over the line. Carbery kicked the extra two in what were the final points of the match.

Ireland will now have to wait to see what happens with Scotland and Japan’s game tomorrow with a possibility that it will be cancelled. Depending on what happens Ireland could finish top or second in the pool facing one of New Zealand or South Africa next weekend, while Samoa head home following this defeat.

Wales Stutter to Victory Over Uruguay