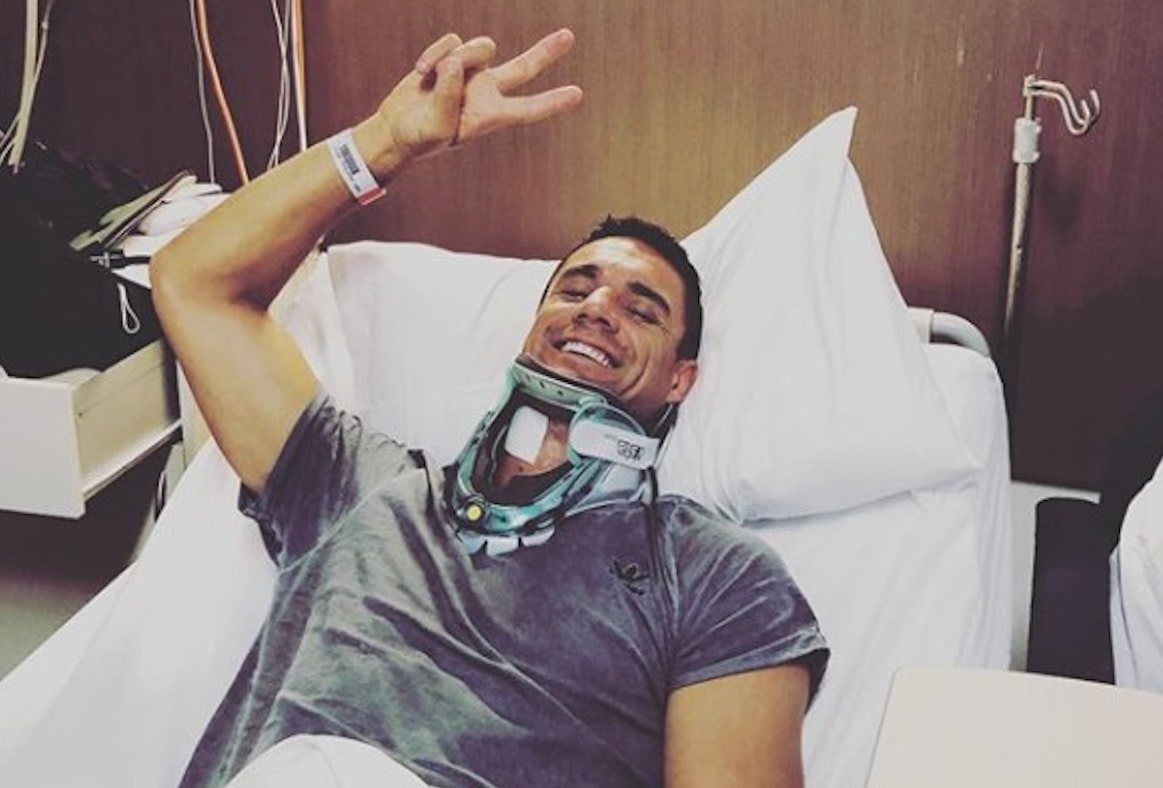 World All Black, Dan Carter took to Instagram this morning to provide an update after having surgery on his neck.

Carter was due to move to Racing 92 as a medical joker last month, coming in to provide cover for the recently retired Pat Lambie. A deal had been signed and sealed but Carter failed the medical due to the discovery of a neck issue which has forced the former Crusader’s 10 under the knife.

Carter had previously played with Racing 92, picking up a Top 14 title during his time there. More recently he has been playing in the Japanese Top League with Kobelco Steelers. The Steelers granted Carter a temporary release from his contract to take up a short term contract with the Paris based side, Racing 92.

Carter has now had the surgery on his neck to hopefully resolve the issue and posted the below message on his Instagram.

Another challenge to conquer! Happy my neck surgery went well and now the long road to recovery starts #cervicalfusion #loveachallenge

“Another challenge to conquer”

While this injury has nullified his chances of returning to European rugby, Carter is optimistic it will not end his playing career. The 37 year old is hoping to return to his side in Japan, where he will be hoping to win another Top League title with the Steelers.

England have confirmed that assistant coach Steve Borthwick will leave his role come the end of the season.

The 57-cap former England international has been involved with head coach Eddie Jones since 2012, having previously held the role of Japan’s forwards coach.

However, in 2016 the two left for England, during which time they have picked up two Six Nations crowns and made it to the Rugby World Cup final last year, but Borthwick admits following the tournament in Japan he made the decision to call time on his current role.

“I am very proud of what we have achieved as a team since 2016, culminating in a Rugby World Cup Final last year. Having come back from Japan, spent time with my family and reflected on my time with England, I have decided to step away from the role towards the end of the season,” he said.

As well as his time with England, Borthwick was also part of the coaching set-up during the British and Irish Lions drew with New Zealand in 2017.

Speaking on his departure head coach Eddie Jones praised his assistant’s impact and confirmed he will be missed around the camp.

“I have had a great seven years with Steve. He is a loyal, hard-working and analytical coach but I understand he needs now to get out on his own following this campaign. He’s made that decision and we are really pleased for him. He created a great lineout for England and really developed the young guys. If you look at someone like Maro Itoje, he’s become a world-class lock under Steve. He has also turned our maul into a weapon for us and he’s done brilliant work co-ordinating the England programme. We will miss him greatly,” he said.

The Rugby Football Union have already announced that Jason Ryle will take on the position in November and he is delighted to have the opportunity.

“I am really excited about the opportunity to work in a world-class programme with the England national team and someone like Eddie with his experience is very appealing for me. It will be a real honour to work with some of the best coaches and so many quality England player,” he said.

Ryle is currently the assistant coach at Australian rugby league side Melbourne Storm, where he has been since 2016, but this will be a huge step up for him.

Meanwhile, it is expected that Borthwick will head to Leicester when he does leave the England team, in what would be a massive boost for the Premiership outfit.

Wales have announced that they will take on Japan in the far east this summer with the venue to be confirmed in due course.

It will be Wales’ first time back to Japan since their Rugby World Cup campaign last year, where they went on to finish fourth following a semi-final loss to eventual winners South Africa and another loss to the All Blacks in the third-place play-off.

The match will take place on June 27th, ahead of the team’s trip to New Zealand where they will play two tests against the mighty All Blacks and head coach Wayne Pivac is looking forward to the recent World Cup hosts.

“Going back to Japan for Wales will be a really big fixture on the back of a really successful Rugby World Cup for Japan as hosts both on and off the field. The squad and Welsh Rugby Union made a huge impression on the country in the lead up to and during the World Cup and attracted a lot of local support so it will be great to take the squad back to Japan for the first summer test,” he said.

Wales’ neighbours England are also set for a return to Japan in the summer, with Eddie Jones’ side set for a two-test series against the Brave Blossoms.

It is a huge boost for the Japanese team, who will now get to face some top-tier nations following their incredible World Cup displays and will now have the chance to continue their progression at the top-level of the game.

Huge Relief for Jones Ahead of Six Nations

England prop Kyle Sinckler is set to return to action for Harlequins this weekend in what is welcome news for England head coach Eddie Jones.

Sinckler missed out on last weekend’s loss to Sale Sharks in the Premiership having gone off injured during Quins draw with Leicester the week before.

The England star left the field of play in the 65th minute of that match and the worst was feared as medical staff helped him come off.

However, the tighthead is in line to return to the starting line-up for Quins trip to Bath in the Champions Cup this weekend.

It is a massive boost for Jones, who lost his star early in the Rugby World Cup final last year due to concussion and would have been worried that he would once again be without him for the country’s Six Nations opening game against France on February 2nd.

If he can stay fit between now and then Sinckler appears to be nailed on for a starting role in what will be the team’s first game since their World Cup loss to South Africa.