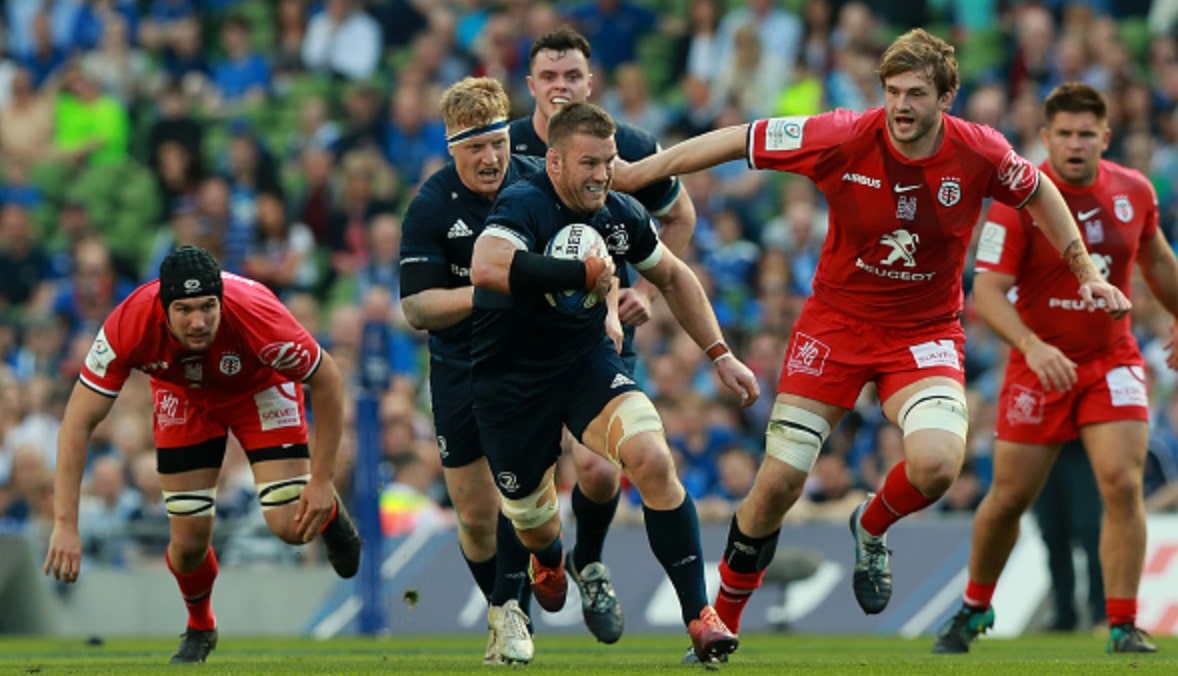 Leinster will face Saracens in this season’s Champions Cup final after seeing off Toulouse 30-12 in the semi-final at the Aviva Stadium on Sunday.

The reigning champions get the chance to defend their title ?

A clinical display from @leinsterrugby to power past @StadeToulousain puts them in the #Heineken #ChampionsCup Final at St James' Park ??

Moment of the match? pic.twitter.com/FqvaHx1xVF

The win means that Leinster will have the chance to win back-to-back titles and remain in the running to also defend their Pro 14 crown.

The away side got off to the perfect start when Thomas Ramos slotted over a fifth minute penalty to put them 3-0 up.

Five minutes on and Leinster were level thanks to a Johnny Sexton penalty.

From the resulting kick-off Ramos kicked the ball past the end zone and out for a Leinster scrum on half-way. Leinster had nine phases before sending the ball through the hands and over to James Lowe who battled through two tacklers to touch-down in the corner.

Sexton converted from the angle and suddenly Leinster were 10-3 ahead.

Leinster never looked back from there and when Richie Gray was sin-binned for an intentional knock-on in his own 22 they capitalised.

Sexton went to the corner and after securing the line-out the boys in blue marched towards the line, with Luke McGrath diving over the white-wash. Sexton sent over the extras with another impressive kick and it was 17-3 with 25 minutes played.

Robbie Henshaw was sent to the bin on the half-hour mark for a deliberate knock-on of his own. From that penalty Ramos got the visitors back in the game kicking the three points.

Leinster thought they had scored another try with the clock in red as James Lowe raced over to touch down only for the TMO to penalise Jack Conan for obstruction in the build-up and reverse the decision meaning it was 17-6 at the whistle.

The reigning champions have the advantage at the break ?

Tries from Lowe and Luke McGrath give @leinsterrugby the edge, with Ramos slotting 6 points to put @StadeToulousain on the board ??

Toulouse started the second-half as they did the first with Ramos knocking over an early penalty to make it 17-9.

That meant little minutes later when great work from Jordan Larmour and Cian Healy allowed Scott Fardy to stretch and score another try. Sexton was perfect with his kick once more to leave the score at 24-9.

Maxime Medard came on and thought he had got the visitors back into the game with a chip and chase only for replays to show that Garry Ringrose got to the ball first. Fellow substitute Romain Ntamack kicked a penalty from the previous play to make it 24-12.

That kick was equalled by man-of-the-match Sexton’s penalty on 65 minutes before he left the pitch to be replaced by Ross Byrne.

Byrne had the final say of the game when he knocked over a penalty with three minutes left meaning the home side finished as 30-12 victors.

Leinster will now look to bring that form into the Pro 14 semi-final before heading to St. James Park in Newcastle on May 11th to attempt to win a record fifth European crown against Saracens. Toulouse on the other hand will hope to continue their march toward the Top 14 title after a disappointing day at the office.

It's @Saracens ? @leinsterrugby in Newcastle, and it's going to be huge ?