Scotland Women head coach Shade Munro is delighted his back row will be bolstered by the return of No.8 Jade Konkel for the visit of resurgent Canada.

Related Topics:6 NationsFeaturedScotlandWomens 6 Nations
Up Next

Dogged Scotland edged out by Canada in Scotsoun thriller 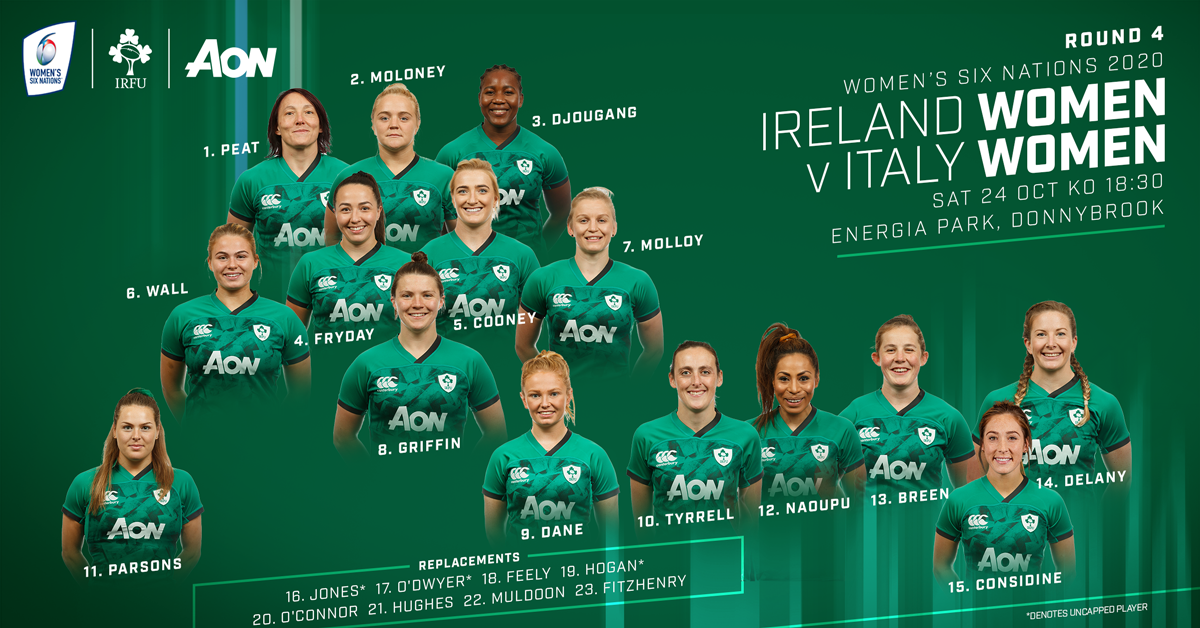 Dorothy Wall will make her first start for the Ireland Women’s 15s side, having come off the bench in the all three of the competition’s earlier rounds. Joining her in the back row will be Claire Molloy, who will earn her 70th cap for her country, and captain Ciara Griffin.

Lindsay Peat, Cliodhna Moloney and Linda Djougang all start in the front row for the fourth game in succession with Nichola Fryday and Ciara Cooney behind them in the second row.

Hannah Tyrrell and Kathryn Dane form the half-back partnership with out-half Tyrell making her first start of the campaign.

Enya Breen and Sene Naoupu are the centres while Béibhinn Parsons, Lauren Delany and Eimear Considine all link up in the back three.

Griggs says the entire squad are aware that they are part of a select group of people permitted to play competitive rugby at the moment.

“We’ve spoken about it,” says the Head Coach.

No one across Irish Rugby in the women’s game is actually able to pull on a jersey and play right now and yet here we are already privileged to represent our country and be one of the only teams actually playing in these times.

It’s not lost on us and we want to make sure that we perform really well and give everyone watching something to cheer about come the final whistle.”.

There’s potential for Ireland debuts off the bench on Saturday with uncapped forwards Neve Jones, Katie O’Dwyer and Brittany Hogan all earning their place in the match day squad.

Laura Feely and Hannah O’Connor will provide the remaining cover for the pack while Ailsa Hughes, Larissa Muldoon and Katie Fitzhenry will give Coach Griggs further options in the backline. Fitzhenry along with Tyrell and Hogan have also featured for Ireland Sevens in the HSBC World Rugby Sevens Series 2020.

Speaking about team selection, Griggs says: “I think the beauty of what we’ve got now is such a competitive wider squad and some of those selections weren’t as straight forward as you think. Some of those players who’ve missed out can take credit for how hard they’ve pushed these girls.” 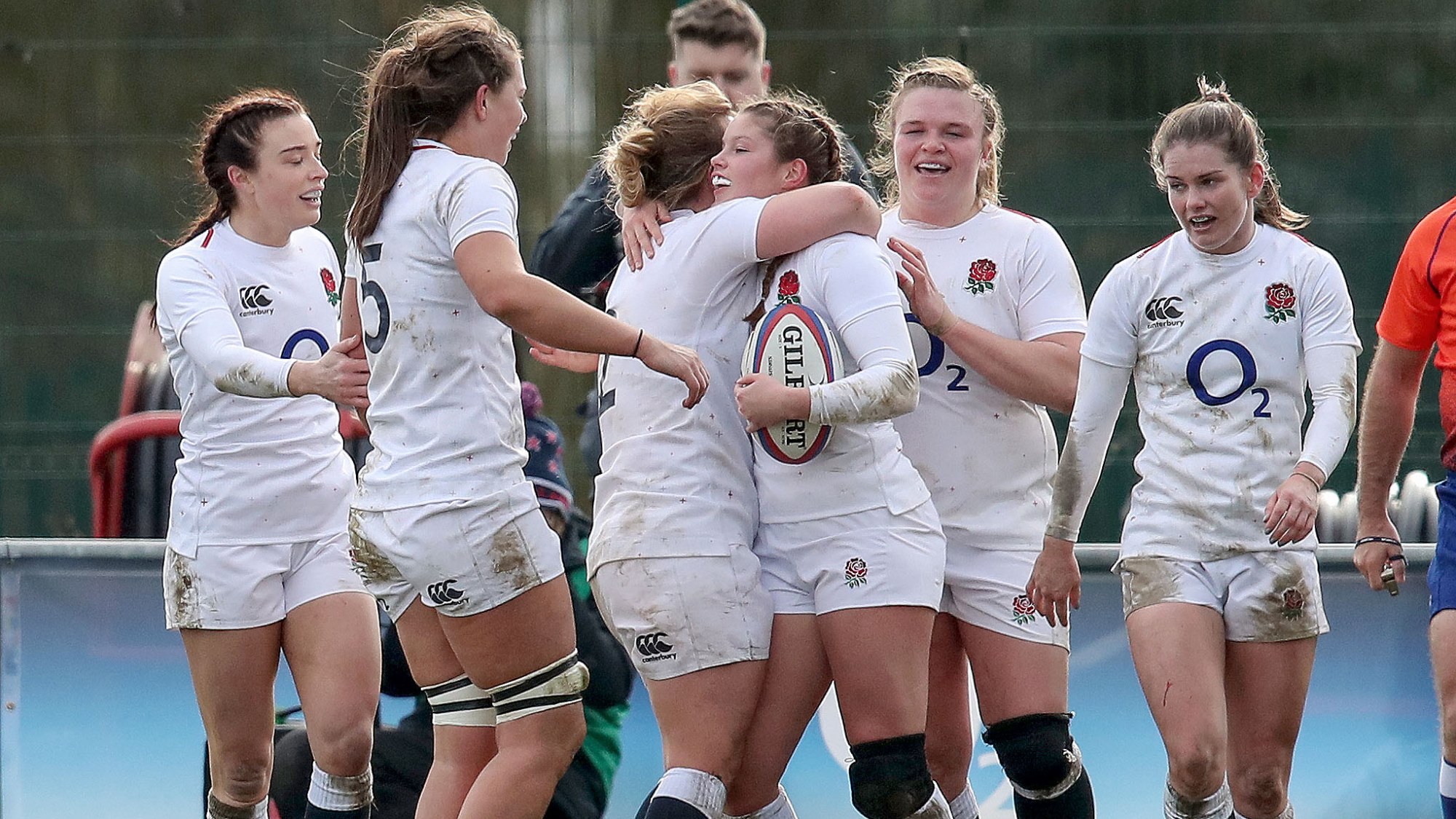 Simon Middleton’s team travel to Clermont-Ferrand to take on France on November 9, before returning home to play Quilter Internationals against the same opposition at Exeter Chiefs’ Sandy Park and Italy at Bedford Blues’ Goldington Road.

While the Blues’ home ground is yet to host an women’s international, the Red Roses’ last outing at Sandy Park attracted a record 10,545 crowd who were treated to a dominant 55-0 Six Nations victory over Italy in March.

“Playing France at any time is always a real challenge, it’s one of the toughest places to go,” Middleton said.

“To then come back and play them on home soil at Exeter will be great – when we played there against Italy in the Six Nations it was probably the highlight of the tournament, with the exception of actually winning the competition.

“The way the crowd and the people of Exeter embraced the Red Roses left the biggest impression on all the players and the staff.

“If we get that again, it would be tremendous.”

? FIXTURES CONFIRMED
The #RedRoses‘ autumn match schedule has been announced, including two home #QuilterInternationals in Exeter and Bedford ?

The Red Roses toppled France 41-26 in Doncaster, before going on to see off Italy 55-0 at the Chiefs’ home ground.

And this autumn’s schedule will give England the chance to both prepare for their title defence as well as showcasing women’s rugby to new corners of the country.

Nicky Ponsford, RFU Head of Women’s Performance, said: “Matches against two of our Six Nations opponents who we travel to play in 2020 will give a good indication of where we are as a group building on what we learnt in the summer.

“We’re delighted to be heading to Bedford and know the importance of taking the Red Roses to new audiences.

“Equally, Sandy Park is a first-class venue and we are really excited to work with Exeter Chiefs once again after the great experience both the players and fans had there last year.”

And while Italy’s last game against England was that defeat at Sandy Park, the Italians will be buoyed by their strong Six Nations showing.

“France and England have been traditionally strong for a long time but Italy have progressed over the last few seasons,” Middleton added.

“They’re flamboyant, unpredictable and have lots of facets to their game and it’s always a challenge to play against them.”

Leinster Rugby have this morning confirmed a first ever double-header in Energia Park on the 17th August 2019 to kick start the Leinster season.

At 3.00pm Leo Cullen’s defending Guinness PRO14 champions will play their first game of the Bank of Ireland Pre-Season Schedule against Coventry, while at 5.30pm Ben Armstrong’s defending Interprovincial Women’s Champions will get the defence of their title underway against Connacht. 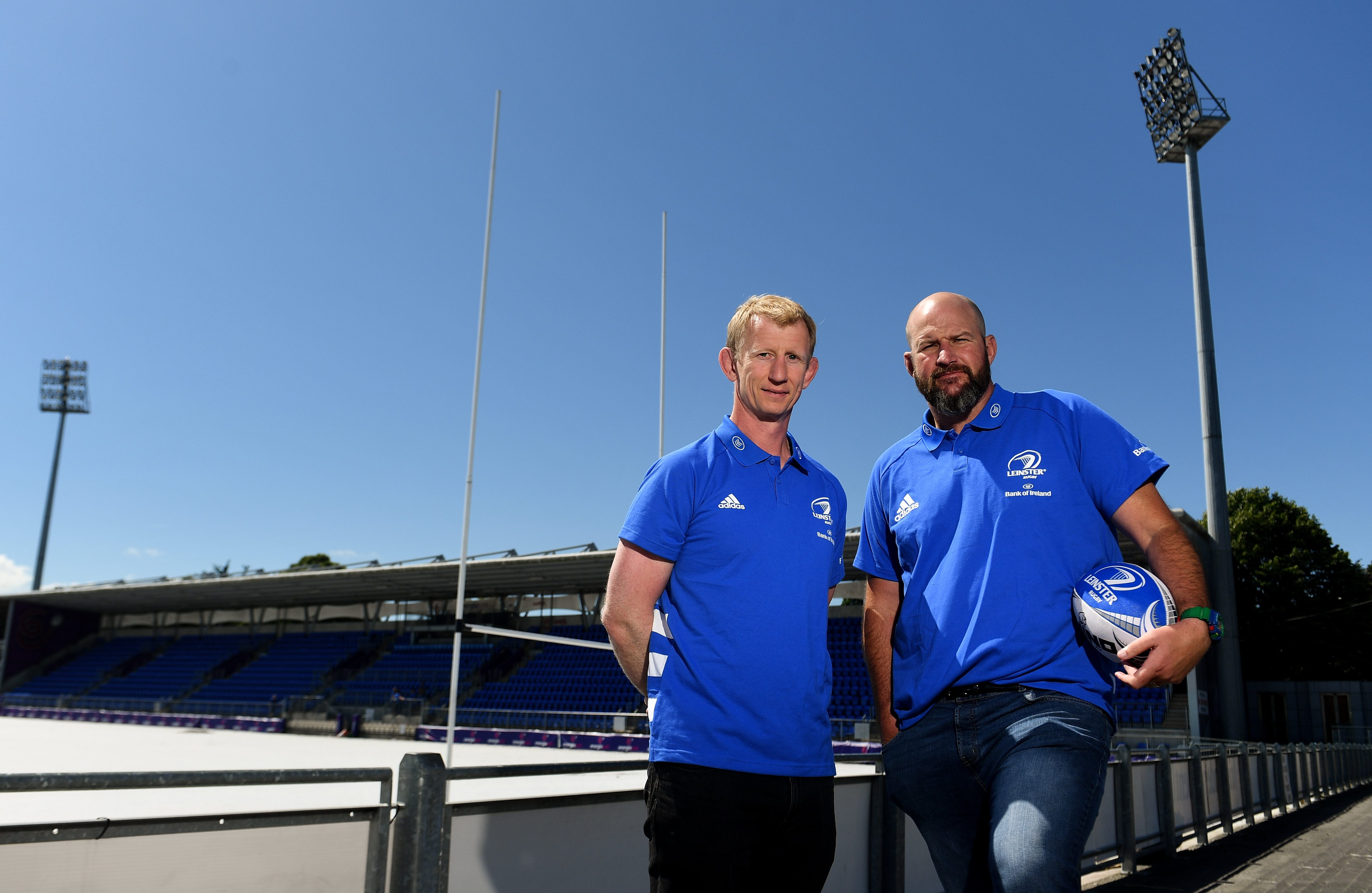 At the announcement this morning in Energia Park, were both Head Coaches, Leo Cullen and Ben Armstrong and Leinster Rugby players Ed Byrne and Michelle Claffey. 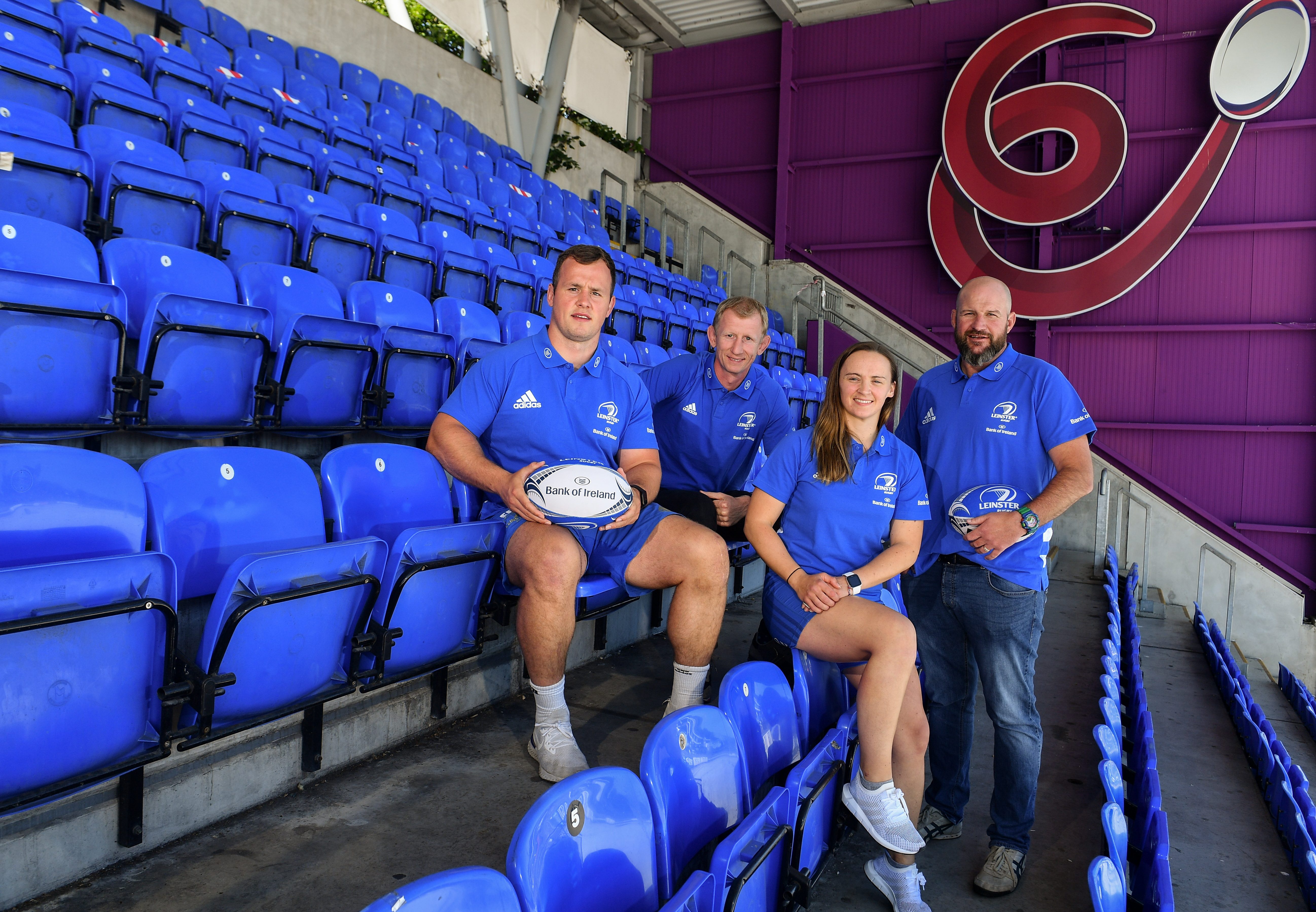 The Leinster Rugby men’s team finished out their 2018/19 season in dramatic fashion, in the rain in Celtic Park, with a 18-15 win against the Glasgow Warriors in the final of the Guinness PRO14, while the Leinster Rugby women’s team had a nervy end to their own campaign as a 14-14 draw with Munster was just enough to win the title in Energia Park. 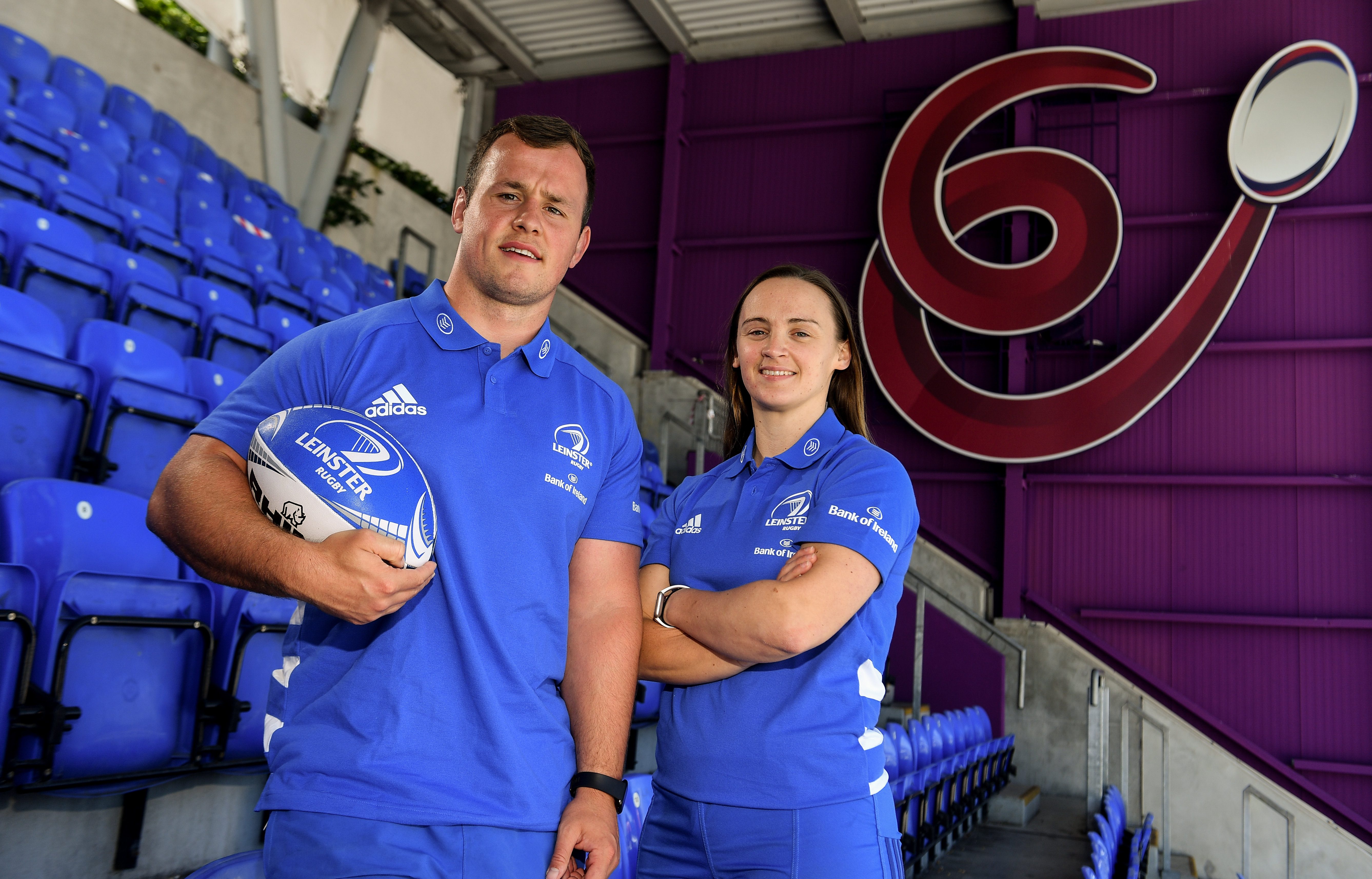