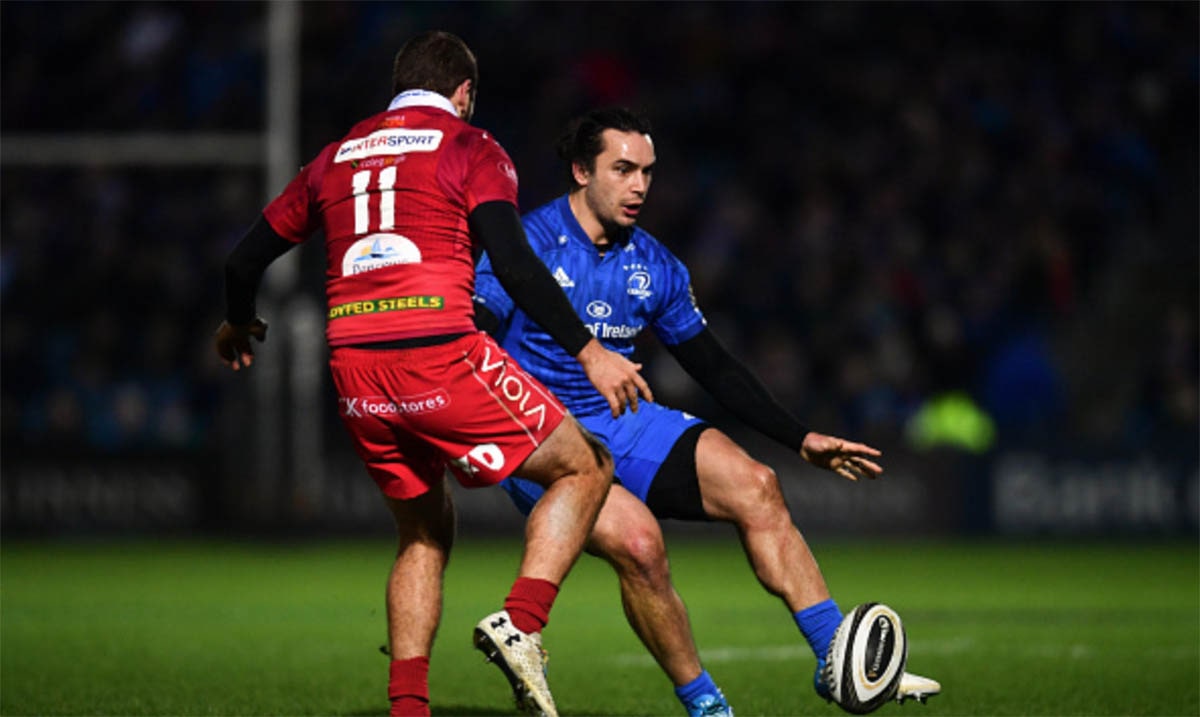 Leinster withstood large periods of pressure to secure a 22-17 win over the Scarlets, in the RDS on Friday night.

FULL-TIME! A PULSATING FINISH AT THE RDS ARENA! #LEIvSCA pic.twitter.com/GrTBtkpt7x

The win moves Leinster 21 points clear at the top of conference B at least overnight while the Scarlets remain in fourth.

On a night when both teams were missing the vast majority of their star men, it was the Scarlets that put the pressure on early.

They built up phases only to be let down by loose passes forward and knock-ons which caused the game to stop and start.

An injury to Scarlet’s David Bulbring brought the game to a halt in the first half.

Leinster registered the opening score of the game in the 31st minute through a Ciaran Frawley penalty.

They went into the break 10-0 up thanks to a bit of fortune. Mick Kearney had a loose pass picked up by Conor O’Brien, who released to centre partner Rory O’Loughlin, who in turn dodged tackles from Johnny McNicholl and Phil Price to go over for the game’s opening try.

Ciaran Frawley added the extras before they left the field,

The Scarlets once more started the half well and were rewarded in the 52nd minute. Dan Davis broke away from Rob Kearney on halfway, before passing to Kieran Hardy to touch down.

Dan Jones slotted home the conversion, before bringing the sides level on the hour mark with a penalty.

With 11 minutes remaining the home side scored again through James Lowe, with replacement and fellow Kiwi, Jamison Gibson-Park setting him up. However, Frawley missed the chance of putting seven between the two missing the kick.

Four minutes on substitute Vakh Abdaladze broke into the Scarlets 22, with fellow sub Noel Reid kicking, ahead for Barry Daly to cross the whitewash. Frawley kicked over the conversion this time to mwhitewash10.

Scarlets ensured a nervy finish scoring a minute later with Kieran Hardy completing his brace thanks to fine work from McNicholl. Dan Jones converted to put five between the teams with five minutes left.

However, Leinster kept the Scarlets out to hold on for the win and maintain their 100% home record this season.

After the game Scarlets head coach Wayne Pivac reflected on his sides missed opportunities in the opening half.

“We created some opportunities in the first half and didn’t convert. We had three clean line-breaks and need to convert at least one of those. So, to be 10 points down at half time was pretty disappointing,” he said.

The loss will be tough on the Scarlets who will feel it was one that got away, but they must pick themselves up as they head to current second placed Treviso next.

Leinster head to Zebre as they look to continue their quest for back to back titles.