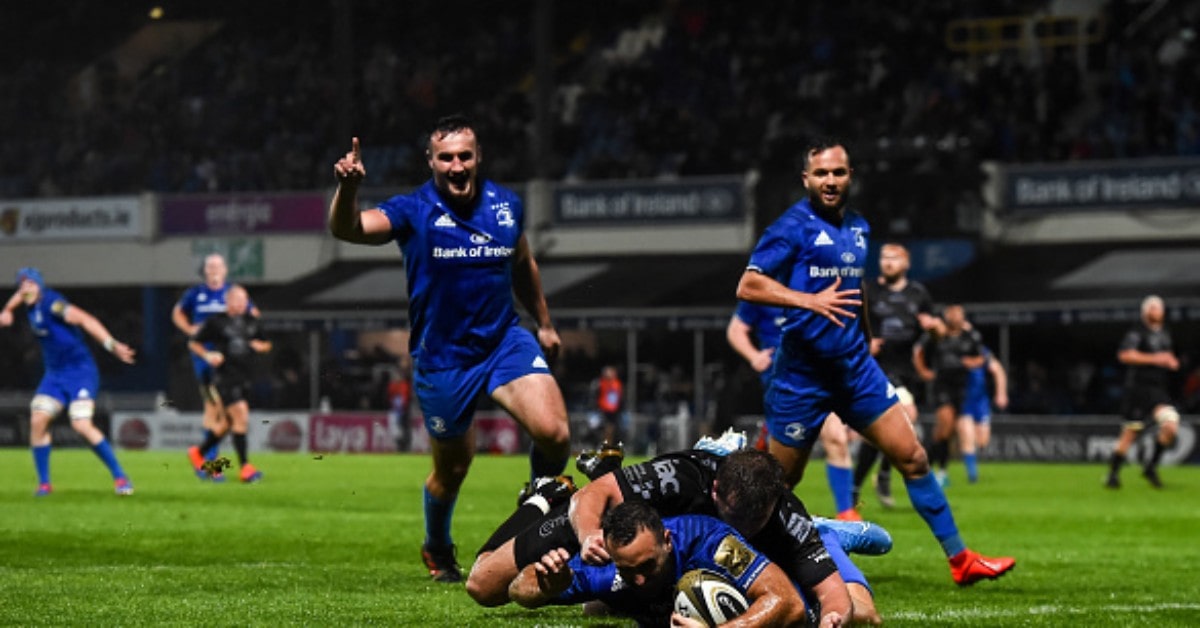 Leinster have made it five wins from five at the start of the PRO14 season with a 50-15 Victory over the Dragons in the RDS tonight.

A brace each from Dave Kearney and James Lowe, along with tries from Michael Bent Harry Byrne, Ronan Kelleher and Hugh O’Sullivan saw Leinster ease past the Welsh outfit.

Leinster got off to the perfect start with Bent barrelling over from close-range inside nine minutes with Peter Dooley and Ryan Baird helping over the line. The conversion was missed but it was 5-0 to the hosts.

However, ten minutes later the Dragons got back into the game as Sam Davies knocked over a penalty to make it a two-point game.

The men in blue hit back straight away stretching their lead with their second try of the game as they exchanged the ball with some brilliant handling skills on the right-hand touchline before Dave Kearney raced in for the five-pointer. Byrne slotted over the extras making it 12-3 with just over a quarter of the match gone.

Once again the away side came back after conceding as Jordan Williams went over after the ball went loose in the opposition 22. Davies couldn’t cut further into the lead as he sent the conversion wide.

With little over five minutes remaining in the half Leinster fly-half Byrne went in for their third try on his first start for the province as he burst through a gap in the Dragons defence to touch down. He converted his own try to give the hosts a 19-8 lead come the whistle.

The hosts got off to a blistering start in the second period as a line-out maul four minutes into the half saw Kelleher go over for his side’s fourth try securing another bonus-point for the reigning champions. Bryne couldn’t add the two extra this time around but Leinster were on fire in the pelting rain.

Two minutes on and try number five arrived as Byrne sent an inch perfect cross-field kick to Kearney, who darted forward before passing inside, but he got the ball back once again to jink inside to get over for the score. Byrne again failed from the tee but suddenly it was 29-8 to the hosts.

As the clock ticked over the hour mark Leinster had another try as they showed some wonderful hands on the left-hand side, beating the on-rushing defence to send the ball to winger Lowe who had open-field ahead of him which he ran into to put the ball over the line. Byrne found his kicking boots to add the conversion from the left.

Three minutes later and a bit of luck lead to replacement scrum-half O’Sullivan finding himself only needing to touch the ball down for the five-points. Byrne notched over the conversion to make it 43-8.

Another two minutes on and Lowe and Leinster went over for another try, with the ball being knocked on by the Dragons, straight into Lowe’s arms, with the winger sprinting over from the half-way line for his side’s seventh try. Byrne had the easy task of adding the two points from in front of the posts to make it a half-century for the hosts.

Dragons had the final say in the game with a last minute consolation try through winger Owen Jenkins who raced over in the right corner. The conversion meant that it finished 50-15 to Leinster.

The win means that Leinster have secured four bonus-point wins from their opening five matches and maintain a 100% record at the start of the 2019/20 PRO14 season as they look to win a third title on the bounce. Next up for the boys in blue is a trip to Connacht next week for their first interprovincial derby of the season, while for the Dragons they face another tough trip away to Edinburgh.