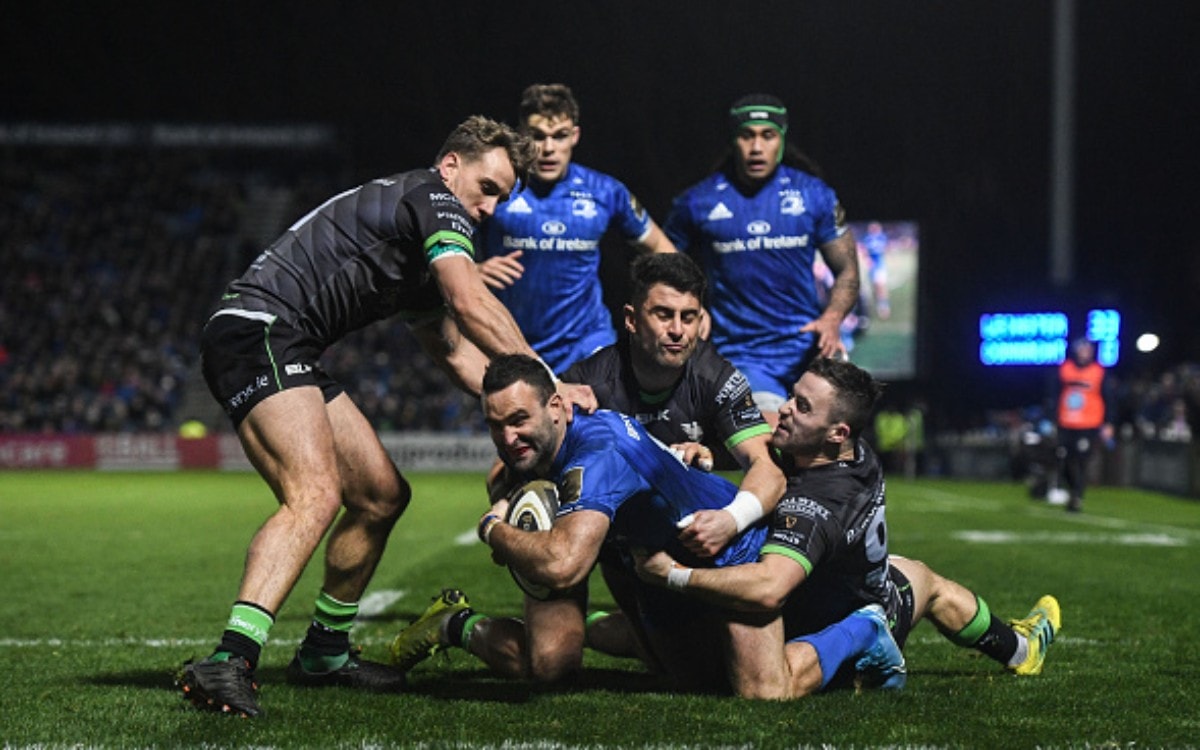 Leinster have continued their 100% record so far this season with another dominant display running out winners over Connacht at the RDS this evening.

A brace of tries each from Max Deegan and Garry Ringrose as well as further five-pointers from Dave Kearney, Ciaran Frawley, Joe Tomane and Luke McGrath helped the home side to a comfortable victory.

Leinster got off to a perfect quick-start as Connacht made a mess of an early line-out which led to Peter Dooley breaking through the defensive line before offloading to Deegan, who barged over for the opening try. Ciaran Frawley split the posts with the conversion to make it 7-0 after just two minutes.

The hosts had their second try just under ten minutes later as Connacht eventually collapsed under the pressure they were under. Leinster went through the phases in the Connacht 22 before unleashing their back-line as Garry Ringrose sent a looping pass out left to Kearney, who burst a couple of tackles to go over for the score. Frawley failed to convert this time around.

Leinster had number three two minutes later as they went from their own 22 all the way up the other end of the pitch. Frawley was on the end of the brilliant move by the home side, with Deegan darting through the Connacht defence before passing to his fly-half who ran under the posts. Frawley made no mistake this time around with the kick to push Leinster 19-0 ahead with less than a quarter of an hour on the clock.

They had the bonus-point wrapped up on 20 minutes as they fed the ball to Deegan from a line-out close to the Connacht try-line, he in turn sent it to Tomane who burst over for the fourth try of the game. Frawley kicked the extras to push the hosts further in front.

On 34 minutes the boys in blue were over for another five-pointer, as they went through the phases inside the opposition 22 before scrum-half McGrath had a quick pick and go from the back of a ruck close to the try-line and touched down for the try. Frawley converted once again to make it 33-0.

Three minutes on and Deegan scored his second of the evening and his team’s sixth after another break through the Connacht defence led to some phases in the 22 before the try. Frawley knocked over his fifth two-pointer of the night from the tee to leave it at 40-0 to the hosts come the half-time whistle.

It took a few minutes for the game to really get going in the second period, but Leinster hit top form once more eight minutes in as Deegan produced another sensational break through the defence before offloading to Ringrose, who raced over for the try. Frawley kicked the extras again to make it 47-0.

The visitors dominated possession and territory over the next 25 minutes or so and were rewarded with 10 minutes remaining as Tom McCartney barrelled over off the back of a line-out maul. Conor Fitzgerald knocked over the extras to cut ever so slightly into the lead.

However, Leinster came roaring back and from a cross-field kick by replacement Jamison Gibson-Park, Ringrose picked the ball out of the air and charged over the line in the right-hand corner. Harry Byrne converted the score to make it 54-7 and that was the result come the whistle.

The win means Leinster have a perfect 10 from 10 record in the PRO14 so far this season and head into next weekend’s Champions Cup game against Lyon full of confidence with a further four wins from four in Europe too. Meanwhile, it’s a disappointing result for Connacht who will need a much improved result if they are to cause any form of upset when they host Toulouse next weekend.

The Ulster coaching team has named the match-day squad to face Emirates Lions at Kingspan Stadium tomorrow evening (7.35pm kick-off), in what will be the first ever meeting between the two sides.

Tickets for the game, priced from £25 for adults and £15 for juniors, are still available at ulsterrugby.com/buytickets.

The starting XV is unchanged to the side that defeated Benetton last Friday evening. Will Addison is selected at full-back alongside Ethan McIlroy and Craig Gilroy on the wings. Stewart Moore and James Hume form the centre partnership. Nathan Doak and Billy Burns are named as the starting half-backs.

Andrew Warwick is named in the front row at loosehead with Ulster’s latest double-centurion, Rob Herring at hooker and Tom O’Toole at tighthead prop. Sam Carter will again lead the side, and is paired with Alan O’Connor in the engine room. Matty Rea is retained at blindside, with Nick Timoney at openside and David McCann is named at Number Eight.

Kieran Treadwell makes his return from injury to the forward replacements alongside Brad Roberts, Eric O’Sullivan, Ross Kane and Sean Reidy. Mike Lowry could make his 50th appearance for the province if called upon from the bench. The other back line replacements are David Shanahan and Ben Moxham.