Dynamic outside back and All Black Will Jordan has signed on with the Crusaders for the 2023 season.

Jordan’s explosive speed, vision and skill have propelled him to sitting among some of the best players in the world, being awarded World Rugby’s Breakthrough Player of the Year for 2021.

Speaking of his meteoric rise, Jordan recounts what has been an incredibly successful Crusaders career so far, playing 4 seasons and winning 4 titles.

“I’ve been pretty fortunate to have a great run in the Crusaders jersey so far, I remember coming back into the team in 2018 initially and there were so many legends around at the time. I loved being around them and growing from them as much as I could.”

“Over the last few years being able to play a little bit more and having a bit more of a say in the on-field stuff has been great. I’ve really loved my footy at the Crusaders and I’m looking forward to it continuing.” 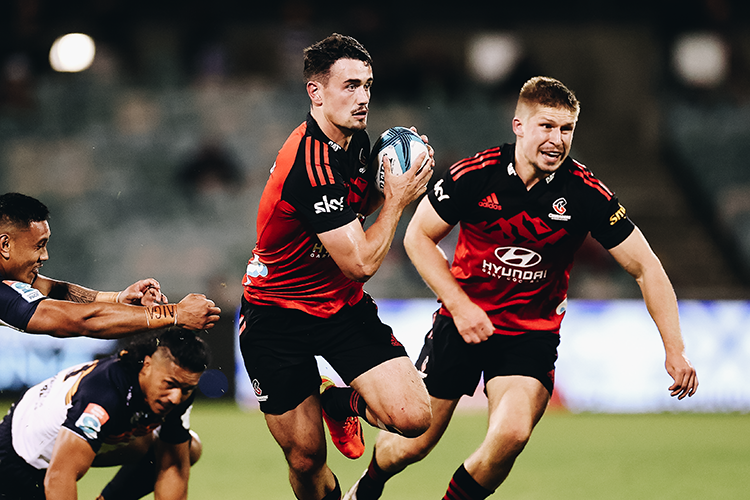 A Christchurch native, Jordan’s love of his boyhood team stems not only from the on-field success, but from the people in the Crusaders environment.

“It’s the people around you. I have a great bunch of mates here and we have a lot of laughs on and off the field – I love turning up every day and getting to do something I enjoy alongside them. It’s been said a bit recently with guys like Jase [Ryan] and Goodie [Andrew Goodman] leaving, it’s all they’ve mentioned is the people and the team.”

When asked about his favourite memory in red and black, it’s no surprise to hear one particular finals win comes to mind for Jordan,

“It’s probably pretty hard to go past this year’s final at Eden Park. It was a season that probably didn’t go that smoothly the whole time, but the way we were able to bounce back and finish off the season at such a tough place to play up at Eden Park against the Blues and win the title again I’m sure is something we’ll all remember.” 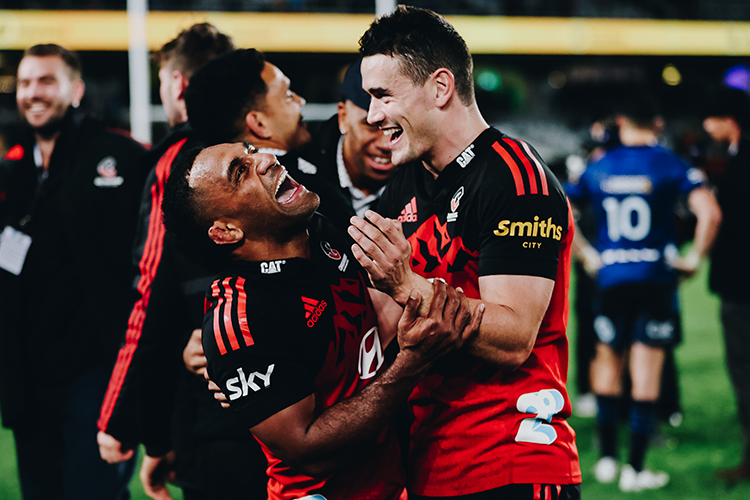 Looking back on his journey, Jordan acknowledges how he has developed as person during his time at the club.

“When I first came into this team I was a pretty young 19-year-old kid and over the years you mature a lot. I think being around guys who have been through the same pathway as you, they know what you’re going through. Their ability to teach you little lessons along the way has been massive. I think, having been here for 5 or 6 years you start to feel a bit more comfortable in this space but there’s always challenges and new things to deal with that continue to grow you.”

Looking toward the upcoming season, Jordan is looking forward to seeing some new faces in the environment that he’s made home.

“There are some exciting changes, some young boys coming through and like I said before some new coaches as well, so really pumped to get alongside them and take on their new ideas. With the new comp – the tarns-Tasman stuff, there were some great games last year particularly against those Aussie teams, so looking forward to growing that again and hopefully replicating some of our past success.”

Jordan will join the Crusaders team in pre-season ahead of the Super Rugby 2023 competition.

Related Topics:CrusadersFeaturedRugbySuper Rugby
Up Next

UMAGA BACK IN BLUES WITH NEW SUPPORT & DEVELOPMENT ROLE

Chay Fihaki Re-Signs with the Crusaders

Dynamic young utility back Chay Fihaki has re-signed with the Crusaders presenting exciting prospects for the team taking the field in the 2023 season.

Fihaki signed with the Crusaders in 2020 as a 19 year old and has since gone from strength to strength, playing seven matches in the red and black and showing great potential.

During his youth career, Fihaki played through the midfield, but as he has progressed through Canterbury and Crusaders’ development pathways, he has nestled into a role at fullback.

Fihaki’s mission for 2023 will be to soak up as much knowledge as possible from some of his All Black teammates.

“I’m feeling excited about the season coming up. 2023 will be another year for me to grow, especially learning off the more senior players and All Blacks,” Fihaki said.

“My focus will definitely be on being more confident and backing my skillset.”

Fihaki’s X-Factor has been outlined by Crusaders Head Coach Scott Robertson, who said, “Chay has a massive boot and the ability to create something from nothing”.

Keep an eye out for Fihaki this season in the red and black!

The NSW Waratahs have secured the services of one of the brightest schoolboy rugby talents in Australia, signing Max Jorgensen.

Max Jorgensen, son of former Wallaby and NRL player Peter Jorgensen, is currently in Year 12 at St Joseph’s College and has spent three years in the NSW system representing the Waratahs Academy at U15, U16, and U18 age levels.

The talented outside back spent time in Nathan Grey’s Junior Wallabies program earlier this year and has been named in the Waratahs Development team to take on a Brumbies XV at St Edmunds College this Saturday in Canberra.

Max Jorgensen said: “I’m proud to be on board with the Waratahs, they have a terrific setup, and the new Centre of Excellence looks amazing.

“I am excited by the opportunities in rugby over the next few years and looking forward to playing high-quality rugby with some amazing players at the Waratahs.

“I’m focused on having a great pre-season and can’t wait to learn from the coaching staff and experienced teammates.”

Waratahs Head Coach, Darren Coleman said: “Securing Max is a positive outcome, not only for the Waratahs but for Australian rugby, as he is one of the elite schoolboys from the class of 2022 and highly sought after.

“It’s great he has decided to remain at the Waratahs especially after spending the past three years in our academy.

“Max understands he has a long way to go and a lot of work to do before he can become a fully-fledged Super Rugby player, but we look forward to working with him and helping him develop his game.”

The ACT Brumbies are excited to announce the addition of outside-back Ben O’Donnell to the club’s Super Rugby Pacific squad until the end of 2024.

The 26-year-old returns to Australia after a three-year stint in Ireland with Connacht, having previously represented Australia in Sevens on 95 occasions, winning Rugby Australia’s coveted Shawn Mackay award for Sevens player of the year in 2018.

O’Donnell is in line to wear ACT colours for the first time in Saturday’s practice match against a NSW Waratahs development side at St. Edmund’s College.

ACT Brumbies outside-back, Ben O’Donnell said: “I’m excited to be back in Australia and to be joining such a highly respected club like the ACT Brumbies.”

“Playing in Connacht was an unreal experience and I’m grateful for my time there and the mates I made but I’m looking forward to working every day with a world-class coaching staff and the boys here who have created a great culture from everything I have heard.

“Preseasons never get any easier but I’m excited for the hard work and especially looking forward to having a run around with my new teammates on Saturday.”

ACT Brumbies head coach, Stephen Larkham said: “Ben will be a quality addition to our group.”

“Ben was a very accomplished 7s player, and he’s made a good transition to 15s, but we feel he’s got a great chance to develop further in our environment.

“With his pace and feel for the game, Ben’s an option across the backline and we’re excited to see how he goes on Saturday.”

Failure to deal with sin-binning periods cost us – Young