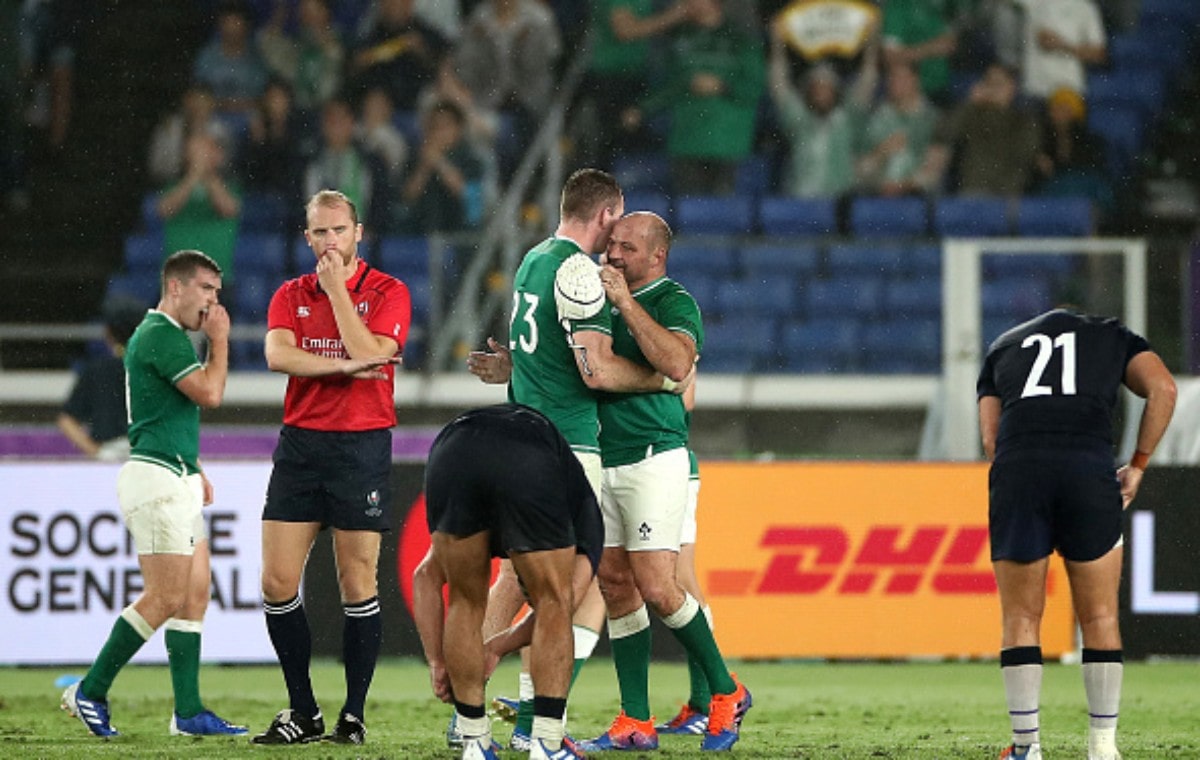 Ireland secured a brilliant bonus-point 27-3 win over Scotland in their opening game of the Rugby World Cup in Japan this morning.

Tries from James Ryan, Rory Best, Tadhg Furlong and Andrew Conway saw the men in green take a bonus-point win over the Scots with an impressive defence display holding the Scottish to only a single score.

The game started at a blistering pace and with lots of loose ball as both teams tried to take control of the match.

However, it was the Irish who got the opening score of the clash on six minutes when Iain Henderson made a lovely break through the Scottish defence before being tackled inside the 22. Following a few phases Ryan powered his way over the line just to the right hand side of the posts.

Johnny Sexton made no mistake with the conversion and it was 7-0.

After that Ireland took control of the game and were in again with a quarter of an hour gone as captain Best finished off a line-out maul in the left-hand corner. Sexton missed the kick this time but Ireland were looking good at 12-0 up.

Scotland came fighting back and Greig Laidlaw cut into the lead with a well struck penalty on 21 minutes to make it 12-3.

Although five minutes later and the game was put further out of Scotland’s reach when CJ Stander took the ball out quickly from the back of a five-metre scrum and within a couple of phases Furlong barrelled over. Conor Murray took over the kicking duties and added the extras, stretching the lead out to 19-3 and that’s how the sides went in at half-time.

A heavy shower of rain led to a scrappy second-half with lots of handling errors and despite the Scottish dominating the early exchanges it was Ireland that went on to score another try.

Murray sent a kick into the Scottish 22, only for a knock-on to fall to Jordan Larmour who was tackled around 10 metres out, but Murray then sent a lovely quick pass out to Conway who raced over in the right corner to ensure the bonus-point. The conversion was missed leaving the score at 24-3.

A Jack Carty penalty on 67 minutes pushed Ireland further into the lead as they looked to see out the game.

Scotland gave their all in an attempt to at least score a try, but even after Tadhg Beirne was sin-binned for Ireland, they could not break down the incredible green defensive line as Ireland saw out a 27-3 win.

Although delighted with the win there were some worrying sights for Irish fans as both Bundee Aki and Peter O’Mahony went off injured during the game. While for Scotland, Hamish Watson looked as though he may have picked up a possible World Cup ending led injury just before half-time.

The win now puts Ireland at the top of Pool A and they will head into next Saturday’s clash with hosts Japan full of confidence after their performance. Meanwhile, Scotland will hope to bounce-back when they take on Samoa on Monday the 30th of September.

All Blacks Edge Boks in Thriller