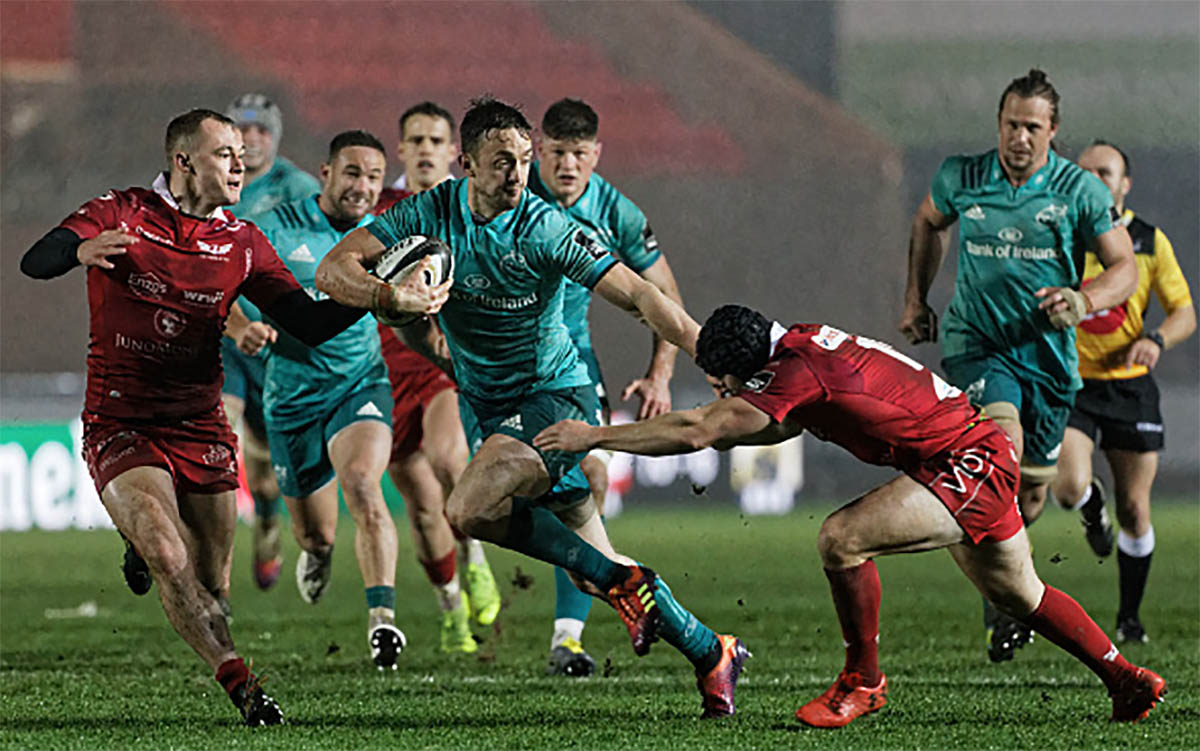 Munster fell to first defeat in 2019 with 10-6 loss to the Scarlets at a rain swept Parc y Scarlets on Saturday.

FT | Munster unable to take opportunities in the second half and we come away from Parc y Scarlets with a losing bonus point #SCAvMUN pic.twitter.com/mFagypR6tG— Munster Rugby (@Munsterrugby) March 2, 2019

Johann van Graan’s men have now dropped to second in Conference A as their result coupled with Glasgow Warriors 42-10 win over Zebre has given the Scottish side a three-point lead at the summit.

The reds started well and were rewarded four minutes in when Bill Johnston slotted over a penalty following a collapsed scrum.

However, less than 10 minutes later and the Scarlets scored the games only try, with Leigh Halfpenny having a surging run, before Jonny McNicholl sent a pass to fellow wing Ioan Nicholas went over.

Halfpenny sent over the extras and it was 7-3 after 12 minutes.

The rest of the half was spent in the Scarlets half as they defended resiliently as they only had 20 percent possession in the entire half.

Munster couldn’t find any reward until the dying seconds of the half when Uzair Cassiem was caught offside and Johnston sent over his second penalty of the night. That was the final score of the half, and it was 7-6 to the Scarlets at the interval.

HALF-TIME | We trail by a point at the interval in very difficult conditions at Parc y Scarlets.

The second-half saw only one score which came after 50 minutes when Halfpenny sent a penalty through the posts to extend the hosts lead.

Munster thought they were over for a try of their own when Jean Kleyn crossed the whitewash only for the TMO to rule it out due to a Rhys Marshell obstruction in the lead-up.

The visitors rallied for a try to secure victory of their own, but the Scarlets defence held out to end Munster’s eight-game unbeaten streak and continue their own incredible home record of only one defeat in Wales since September 2016.

Munster will now have to wait until the 23rd of March to try and regain their status at the top of the conference when they face basement side Zebre.

On the other side, the win leaves the Scarlets in third position in Conference B for now and they will look to build on this win when they face the Cardiff Blues a day before Munster host Zebre.