Declan Kidney has today confirmed the squad that is set to travel to Ireland to take on Munster in London Irish’s final pre-season fixture before the 2022/23 campaign gets underway.

Last weekend saw Irish edge out Jersey Reds 29-31 in an enthralling contest, with tomorrow’s contest against Munster set to be their final preparations before Round 1 of the Gallagher Premiership.

“Heading to Munster is always a special occasion, it will be a great experience for our younger players to play at Musgrave Park,” said Declan Kidney, Director of Rugby.

“It’s a venue that is steeped in the tradition of Munster Rugby.

“Getting players minutes on the pitch is invaluable as we enter the final stages of our preparation for the season ahead. We managed to get 31 players some minutes under their belts last weekend in Jersey, and Friday night is another opportunity to do so again.”

Wasps Names Side For Dragons Pre-Season

Hill ready for Chiefs test at the AJ Bell

Following an extended break due to his involvement in England’s summer tour of Australia, the Sharks family finally got their chance to see Jonny Hill in action last week as the British & Irish Lion made his highly anticipated debut against Bath at The Rec.

But rather than focus on his own efforts, it was the team performance at Bath that Jonny was especially proud of on his first outing as a Shark, with the 28-year-old recognising the resilience of his new teammates in the face of adversity after going down to fourteen men after just nine minutes.

He said: “I was really impressed with the boys at Bath. I thought we fought really hard and showed a lot of perseverance going down to fourteen and then thirteen men at some stages.”

It was a performance to be proud of for Jonny too as the England International played all 80 minutes to help the Sharks complete their second consecutive bonus point victory in as many weeks.

After seamlessly slotting into the Sale squad following a busy summer on tour with England, Jonny credits the extended break offered to him by Sale as a catalyst for his early form this season.

He said: “The extra time I had off following the tour was good. The main thing it allowed me to do was freshen up physically and mentally whilst it also gave me the chance get used to being in a new environment. I’m feeling good for it now though and looking forward to getting stuck into the season.”

It’s a season of change in many areas for Jonny, having to settle into a new city and integrate himself amongst the squad. But the Devon-born giant admits he’s been pleasantly surprised by the northern weather at least.

He said: “It’s been brilliant so far to be fair. I’ve been here five or six weeks now and luckily the weather has been really nice since I moved up. I’ve not been up to too much so far, just getting into the swing of things in pre-season and spending time with the lads. I’ve managed to played a bit of golf but I haven’t found myself a beach to relax on just yet.”

The culture shock of a move from the South-West was balanced by the bromance Jonny already shared with Tom Curry. In fact he revealed he enjoys both Curry twins’ company, so much so that he moved in with the pair when he first arrived in Manchester.

He said: “I’ve spent quite a lot of time with the Curry’s. I knew Tom from England and the Lions and he offered to put me up when I first arrived. That was a strange experience! I’m glad to be out of their way for a bit now.”

Hill is set to make his first appearance in front of the Sharks faithful on Saturday, with the 6ft 7in lock expected to start against his former side.

And after spending seven trophy-laden years at Sandy Park, Jonny knows just what to expect.

He added: “It’s going to be very physical, especially around the breakdown and the Chiefs always bring it up front. It’s going to be a very attritional game but I’m excited for the challenge. I’m just not so excited to see what’s going to happen at the bottom of those rucks!”

Catch Jonny in action this weekend as Sale Sharks face off against his former side Exeter Chiefs at the AJ Bell Stadium. With both sides still unbeaten so far this season, it’s set to be an absolute belter on Saturday afternoon.

A youthful Bath Rugby side put in a spirited display in their Premiership Rugby Cup meeting with Gloucester, but the visitors’ experience told in the second half.

Tom Doughty’s converted try and a George Worboys penalty had the Blue, Black and White 10-7 ahead at half-time.

Jack Reeves’ double added to Jake Polledri’s opener to put Gloucester in front and Kyle Moyle edged the game out of sight.

Bath remained in the hunt for points until late on and hooker John Stewart’s score proved a consolation just past the hour.

Tom Ellis returned to captain the side along with Ruaridh McConnochie, both having missed eight months of action.

Alongside their experience, Assistant Coach Luke Charteris gave his younger players their first run out of the season with Sam Harris and Louie Hennessey earning their senior debuts.

Second row pairing of Michael Etete and JJ Tonks were also appearing for Bath for the first time.

Gloucester welcomed some experience back as Jonny May, Polledri and Lewis Ludlow were named by George Skivington.

The first 10 minutes were evenly matched on physicality, with the ball going through both Bath and Gloucester hands in attack.

Debutant Harris got an early touch on the ball on the receiving end of a nicely placed crossfield kick and demonstrated Bath’s attacking intent.

With solid hits coming from Arthur Cordwell and Etete, and strong carrying from Will Butt, the hosts looked in a good place. However, Gloucester had their moments too.

Italy international Polledri received the ball off the back of a line-out to charge over the line, giving his side the first points of the game.

Answering back, Bath cashed in on a penalty and Worboys got his side’s first points on the board.

Showing their intent once again, a break from Gabe Goss put Bath on the front foot as he made 15 metres down the wing. Spotting the space, youngster Harris put boot to ball to bounce it into touch deep inside the Gloucester 22 as Bath began to put the pressure on.

It paid off as after a succession of penalties, Doughty bided his time at the back of a driving maul to burrow over and Worboys’ extras made it 10-7.

Edging closer to the close of the half, Bath needed to be resilient to thwart Gloucester of any points and they did just that, preventing such with a superb turnover.

Gloucester came out strong in the second period as Reeves capitalised on some open field to sprint over and George Barton kept the scoreline ticking over with another conversion.

The Cherry & Whites continued in the ascendancy with Reeves grabbing his second just before the hour with a bulldozing close-range finish which saw JJ Tonks sinbinned in the process.

A third second-half try came just shy of the hour mark as full-back Moyle slipped through a gap on the outside for Gloucester’s fourth.

Not to be downbeat, Bath bit back quickly and replacement hooker Stewart delivered accurate arrows before steering a maul over for a try.

Barton ticked Gloucester’s tally to 29 to make Bath need two scores to claw their way back in and despite many entries into the 22, they couldn’t quite get past a stubborn away defence.

With many patterns beginning to emerge of what Johann van Graan is trying to instil, there are plenty of positives, as well as work ons, to take from the performance.

Pol Roger Performance of the Match 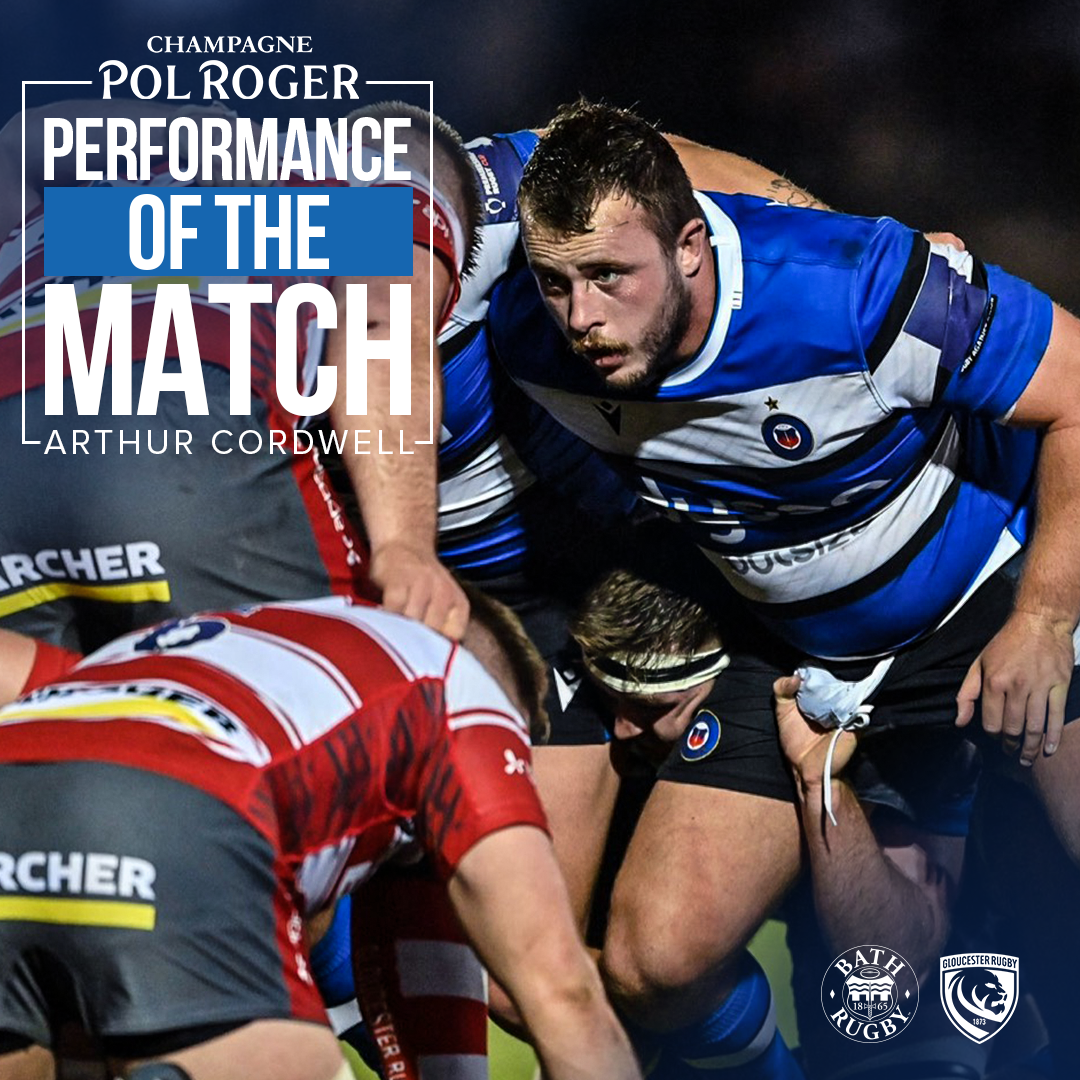 Baxter has insisted there are no issues surrounding back-row forward Simmonds’ move to French champions Montpellier next season.

He is expected to be available for next year’s World Cup but after that will be ineligible to represent his country.

Saracens boss Mark McCall said on Tuesday that he believes the departure overseas of a player in his prime has wider implications for the Gallagher Premiership.

“I say that because Sam is 27, nearing his peak and is now making himself ineligible for England,” McCall said. “I kind of understand someone who is early 30s doing it after they’ve had their international career and want to experience something different. But to start losing the best young talent in the Premiership, someone like Sam, is a worry.”

Exeter rugby director Baxter, though, has adopted a philosophical stance.

“I think people sometimes get the wrong idea about this,” Baxter said. “I talk a lot to the players and staff in that you want people to be in an environment where they can thrive, work very hard, you want them to win and be successful for each other.

“It is not a negative when a player leaves you because someone wants them and can afford to pay them more than you can. It is negative when you fall out and a person moves for no positive reason at all. It’s very rare that happens here.

“Sam goes with our blessing for a great adventure, a great opportunity in France. He has still got a lot of good rugby left in him, and we had a long chat about it. He came to us first and explained. We haven’t been in massive, long, drawn-out contract debates about it. The figures are so far apart that there hasn’t really been a debate.”

The dire finances of Premiership clubs have resulted in the salary cap being reduced to £5million.

And, while necessary, reduced wages on offer to players has made it increasingly difficult for English clubs to compete with sides in France and Japan. The fear is that other members of Eddie Jones’ Test squad will follow Simmonds overseas.

Baxter added: “Even in the £6.4m cap, you could lose players, particularly to France. I suppose with a £5m cap, all of a sudden the attraction of staying in England lessens a little bit because of the difference in the figures.

“There is another argument that if England paid them more per game – that will cause some debate because England players are pretty well paid compared to some other nations – but that’s another way of bridging the gap. Players add up the whole package.

“It’s a challenge, and something that is going to happen for a little bit. But it is not keeping me awake at night. You have got to keep rolling.”