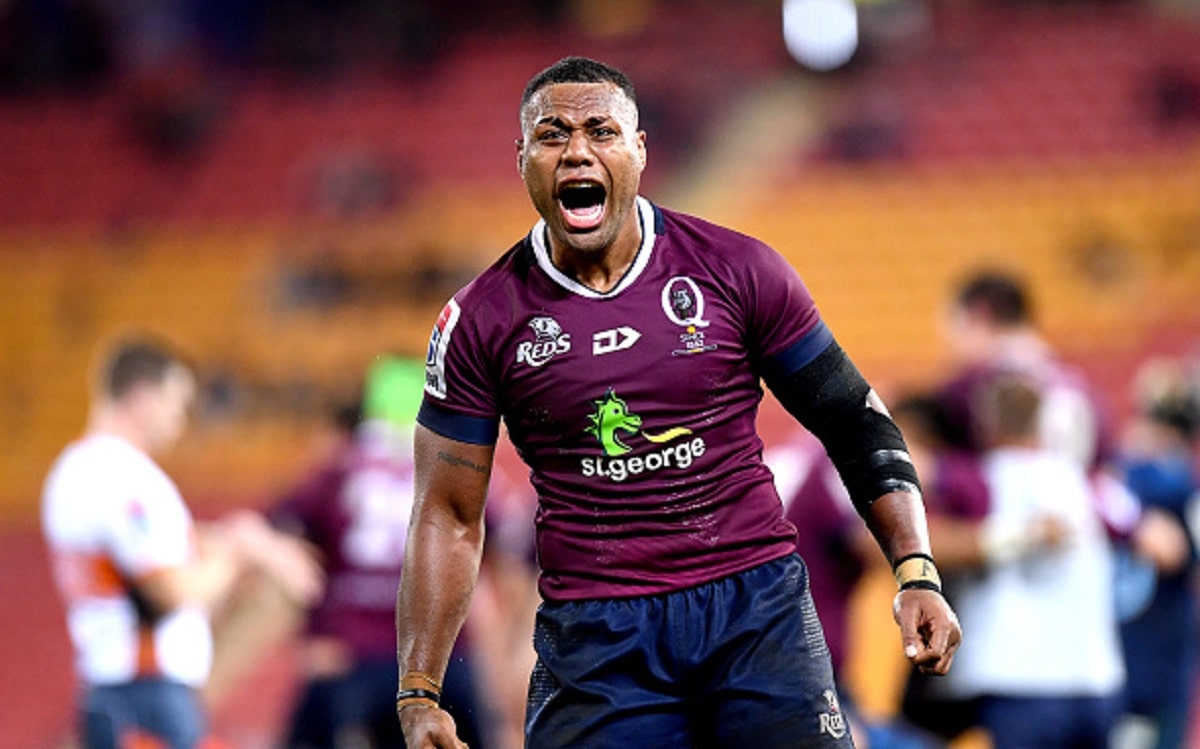 Wallabies’ director of rugby Scott Johnson has admitted that Rugby Australia did all they could to secure the services of Samu Kerevi.

The 25-year-old centre has starred for both club and country but turned down a contract extension with both and will move to Japan following the conclusion of the World Cup later this year.

Johnson, who was speaking at a Melbourne Rebels function ahead of their final regular season game of this year’s Super Rugby, is disappointed that Australia has lost a key player in their prime.

“Let’s get it straight, the offer was good. I’ve seen the offer that Samu was given and it was a very, very good offer that would have put him in the higher echelons of our country,” he said.

The decision to leave by the 23-capped Aussie is also due to off-field matters and Johnson knows that it is complicated.

“It’s not perfect for him and for us and we understand there are issues away from the game for him. It opens the door for other players who we may be talking about in a different light in 12 months’ time,” he added.

Kerevi becomes that latest player to head overseas to play their trade, and he is well below the 60-cap requirement needed for such players to represent the Wallabies, but Johnson stands by the law.

“I think the key component is that we have a responsibility to make sure our competition is the best in the world. It’s great to be able to control the player – their strength and conditioning and their skill development. We understand there are challenges but at the moment we think there’s a nice mix of rewarding longevity,” he finished.

However, former-Wallaby captain Stirling Mortlock, who was also at the function, believes that Rugby Australia needs a serious change, or it will face massive problems in the future.

“It’s a massive challenge and if we don’t get our house in order in four years’ time, we will have to change the eligibility rule because you might have a lot of players not in Super Rugby. It baffles me that we still haven’t got our house in order with everyone pulling in the same direction. We’ve got still different factions in different areas looking after their own backyard and that’s what’s stifling us. The New Zealand model is all about creating great All Blacks and everyone club and player knows that, but it doesn’t happen in this country,” he said.

Wallabies fans are certainly not pleased by the loss of Kerevi and Rugby Australia will need to do something soon to ensure that key players stay with them in the future.

Christian Lealiifano is on the move.

World Rugby has revealed that six legends of the game in Osea Kolinisau (Fiji), Humphrey Kayange (Kenya), Huriana Manuel-Carpenter (New Zealand), Cheryl McAfee (Australia), Will Carling (England) and Jim Telfer (Scotland) will be inducted into the World Rugby Hall of Fame in 2021.

The World Rugby Hall of Fame presented by Tudor recognises those who have made an outstanding contribution to the game of rugby throughout their careers, demonstrating rugby’s character-building values of integrity, passion, solidarity, discipline and respect on and off the field.

The six inductees excel within two themes selected by the Hall of Fame panel for 2021, rugby sevens and the Olympic Games in a big Olympic year, and the 150th anniversary of the first international match between Scotland and England in March 1871.

Andy Farrell has named a 38 strong squad for the upcoming Autumn Nations Series fixtures at the Aviva Stadium.

The final game in the series sees Mario Ledesma’s Argentina line out at the Aviva Stadium on Sunday 21stNovember.   The Aviva Stadium will be at full capacity for these three games.

Johnny Sexton who has been capped 99 times for his country will lead the squad during this international window.

Six of Ireland’s players who toured with the British and Irish Lions during the summer – Bundee Aki, Tadhg Beirne, Jack Conan, Tadhg Furlong, Iain Henderson and Conor Murray are included as is Ronan Kelleher who joined the squad in South Africa.

Six of the players who won their first caps during the Vodafone Summer Series in July have been included in the squad – Robert Baloucoune, Harry Byrne, Gavin Coombes, James Hume, Tom O’Toole and Nick Timoney.

There are two uncapped players named Leinster duo Dan Sheehan and Ciaran Frawley while Munster’s Simon Zebo is named in an Ireland squad for the first time since June 2017.

Robbie Henshaw will continue his rehabilitation programme under the supervision of the Ireland medical team.

Thomas Ahern (Munster) and Jamie Osborne (Leinster) will train with the squad as development players during this window.

“It has been a short lead in to this international window but that is the challenge, to get back up to speed quickly and build on the performances from the Six Nations and the Summer Tests.  This is the start of an exciting period for the group as we begin to build towards the Rugby World Cup in France.”

“In September we got together and mapped out what was coming up in this window, the exciting fixtures that lay ahead in the next 12 months and beyond that the opportunities to improve as a group over the next five windows we will have together.

“In a few weeks’ time we will face an exciting and well coached Japan team who showed in July what a dangerous team they are.  New Zealand dominated the Rugby Championship losing just one game while Argentina are battle hardened from playing the southern hemisphere’s Big 3 week in week out over the past two months.

“It would be fantastic to play in front of a full-house at the Aviva Stadium.  We had small crowds back in for the games in July and even that made a huge difference to the team and the atmosphere in the stadium.”

Ireland’s Autumn Nations Series fixtures at the Aviva Stadium will be televised on RTE (ROI) and Channel 4 (NI).

Scotland has called up its full complement of 2021 British & Irish Lions as Head Coach Gregor Townsend confirms his 42-man squad for the Autumn Nations Series.

Support for Scotland continues to build ahead of the Autumn Nations Series with the confirmation today that the match against Australia on Sunday 7 November is sold out.

A total of 11 new players are added to the squad ahead of the opening game against Tonga on 30 October from the training group which came together earlier this week at the Oriam High Performance Centre.

Glasgow Warriors centre Sam Johnson joins scrum-half George Horne and wing Kyle Steyn who all also missed out on possible game time in the summer series and will compete again for places this autumn.

Head Coach Townsend has selected 12 uncapped players to be part of the tournament squad following their initial involvement in the training group this week.

In the pack Ewan Ashman, Josh Bayliss, Rory Darge, Dylan Richardson, Luke Crosbie, Jamie Hodgson, Marshall Sykes and Pierre Schoeman will all be keen to feature in the four-match series, which begins against Tonga and sees Scotland play Australia, South Africa and Japan on consecutive weekends.

It’s exciting to bring together a blend of highly experienced and uncapped players for our first week of the Autumn Nations Series campaign.

“There have been some notable performances from both our home-based players and those at clubs outside of Scotland, which has enabled us as coaches to select a group which are playing well and will be motivated across the four games.

“We also feel that this the right time to bring in some younger players given their early season form. They have created opportunities for themselves to represent their country and we believe that they will thrive in the Test match environment.

“We face four tough matches in four weeks and Tonga, Australia, South Africa and Japan each present a different challenge and an opportunity to perform in front of our people at BT Murrayfield. It’s great to hear that we will now play Australia in front of a capacity crowd at BT Murrayfield, and it means a huge amount to the players to have this level of support.”

Scotland’s matches against South Africa and Australia are already sold out, a full house at BT Murrayfield is also expected for Japan.

Plans are underway to host a massive Halloween party with fans encouraged to wear fancy dress and with ‘kids for £1’ tickets available it gives a great opportunity for families to see their national team in action, secure your tickets HERE.