The Ireland coaching team have named a 37-man squad for the upcoming Bank of Ireland Nations Series fixtures against world champions South Africa, Fiji and Australia at Aviva Stadium.

An additional panel of players has been named for the Ireland ‘A’ fixture against the All Blacks XV which takes place in the RDS on Friday 4th November.

Ireland will play the Springboks for the first time in six years when Jacques Nienaber’s World Cup-winning side return to Aviva Stadium on Saturday 5th November (Kick-off 5.30pm).

The Ireland squad will be captained by Johnny Sexton and there are six uncapped players in the squad: Ciaran Frawley, Jeremy Loughman, Joe McCarthy, Calvin Nash, Jimmy O’Brien and Cian Prendergast. 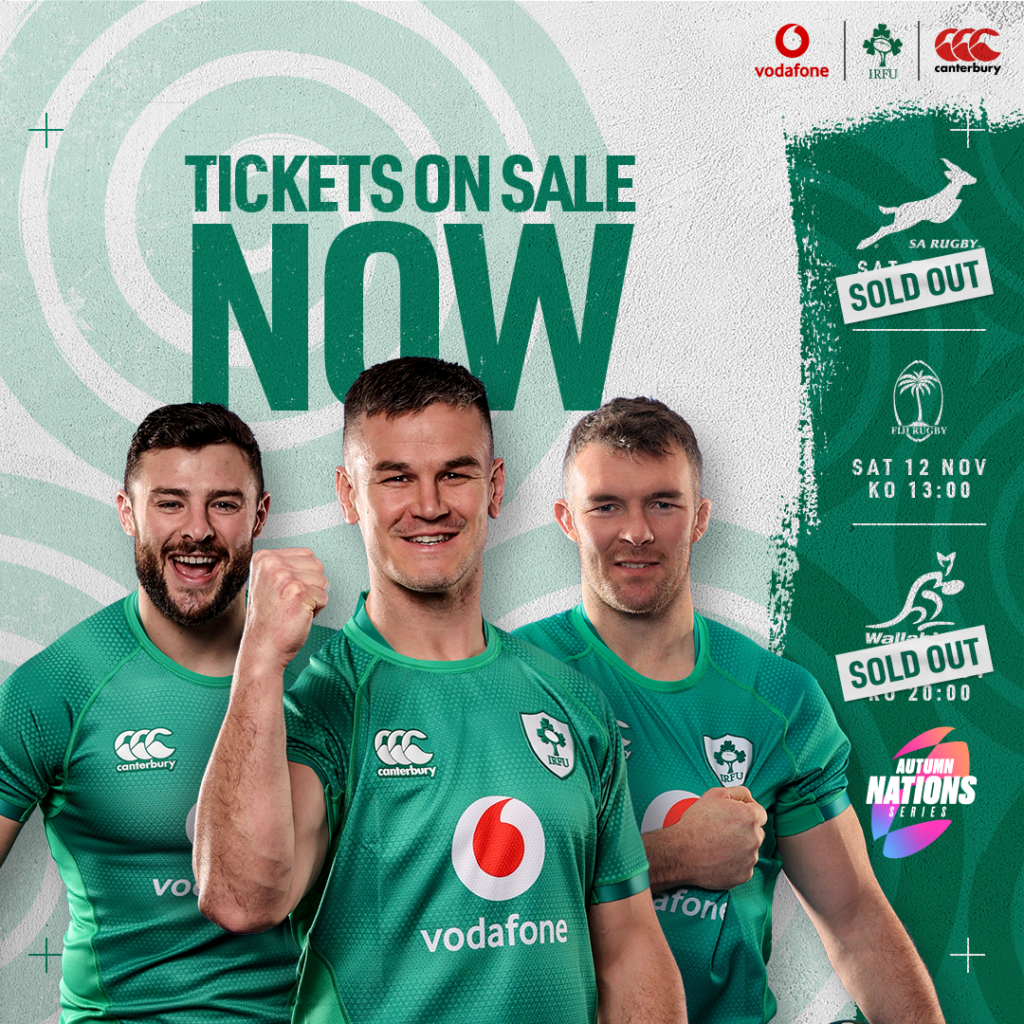 Frawley, Loughman, McCarthy, O’Brien and Prendergast featured for the Ireland XV that played against the Maori All Blacks during the Summer Tour of New Zealand.

Prendergast, McCarthy, Robert Baloucoune and Calvin Nash were also part of the Emerging Ireland squad that played against the Griquas, Pumas and Cheetahs in Bloemfontein earlier this month.

The Ireland ‘A’ panel includes Tom Ahern, Diarmuid Barron, Jack Crowley, Shane Daly, Max Deegan, Jamie Osborne, Scott Penny and Roman Salanoa from the Emerging Ireland squad as well as experienced front-row forwards Dave Kilcoyne and Marty Moore.  Players in the A Panel will join the squad following Round 7 of the URC.

Ireland ‘A’ take on a strong All Black XV squad on the 4th November in the RDS (Kick-off 7.45pm – tickets on General Sale via Ticketmaster.ie from Saturday 22nd October at 10am). The All Black XV squad features experienced Test players such as Damian McKenzie, TJ Perenara and Patrick Tuipulotu.

There are limited tickets available for Ireland v Fiji at Aviva Stadium here.

The IRFU have secured Bank of Ireland as the title sponsor for Ireland’s Nations Series fixtures against South Africa, Fiji and Australia in November 2022 and the pre-World Cup fixtures in August 2023 at the Aviva Stadium against Italy (August 5th) and England (August 19th). Bank of Ireland are a long-time supporter of Irish Rugby and have sponsor partnerships with all four provinces supporting both the professional and domestic game.

Kevin Potts, IRFU CEO, commented, “Bank of Ireland have built a strong connection to Irish rugby through their investment in our game over the past 20 years. Their provincial sponsorships are hugely beneficial not just to the professional game, but to the continued development of provincial club competitions and female representative teams. The arrival of the World Champions South Africa to the Aviva Stadium is a great fixture to cement this new partnership.”

Speaking on the new sponsorship, Gavin Kelly, Interim CEO, Bank of Ireland said: “Bank of Ireland is a proud supporter of rugby in Ireland through our sponsorship of Connacht, Leinster, Munster and Ulster Rugby. Today, we are delighted to further strengthen our involvement as title sponsor of the Bank of Ireland Nations Series. This new partnership with the IRFU underlines our long-term commitment to Irish rugby which is founded on the success of the provincial game and the extraordinary commitment of the players. We share the excitement of rugby fans across Ireland as we look forward to a really exciting set of matches in November against some of the world’s best teams – South Africa, Fiji, and Australia.”

Bank of Ireland Nations Series and Ireland ‘A’ Fixtures