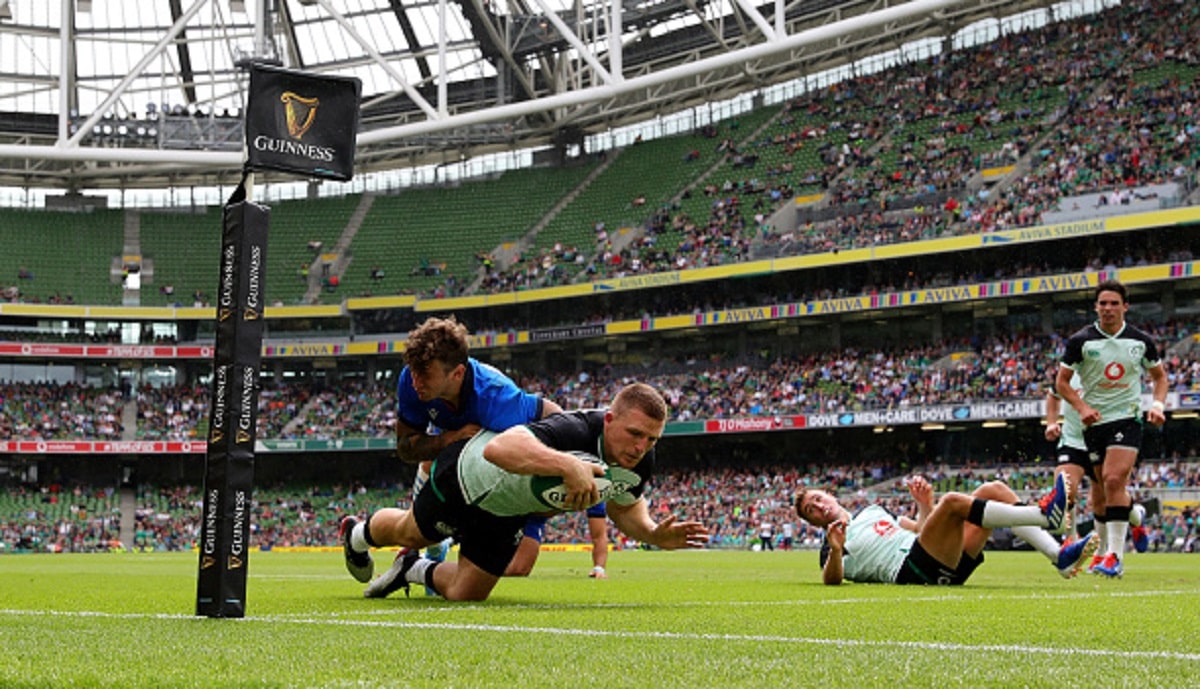 Ireland started their World Cup warm-up games with a 29-10 victory over Italy at the Aviva Stadium on Saturday afternoon.

The victory may have come at a cost however as fly-half Joey Carbery left the field after 50 minutes with a leg injury which has cast doubt over his availability at the World Cup.

Both teams were rusty and although Ireland threatened early on it was the visitors who got of the scoreboard first thanks to a Maxime Mbanda try. However, Carlo Canna couldn’t add the extras.

Ireland came straight back at the Italians and within five minutes they were ahead as Carbery was slipped through five metres out by Chris Farell and touched down. He converted his own try to put the hosts 7-5 up after 18 minutes.

Only three minutes later and Canna made up for his missed kick by latching onto an Edoardo Padovani grubber kick and scoring a try, but once again he couldn’t convert.

With the clock ticking towards the half-hour mark Ireland regained their lead courtesy of a fine backs move which was finished off in the corner by winger Dave Kearney. Carbery was spot on with the kick to make it 14-10.

The hosts ended the half in style as a period of pressure led to Jordan Larmour popping the ball to Andrew Conway in the right corner to score his side’s third try. Carbery failed to convert leaving it at 19-10 at half-time.

Ireland took up where they left off at the start of the second-half as Jordie Murphy powered over to push them further ahead, again the conversion was missed by Carbery.

However, following Carbery’s injury on 50 minutes the game lost its intensity with substitute scrum-half Kieran Marmion grabbing the only score in the final quarter after charging down a kick. The game peated out from there to hand Ireland a 29-10 win.

Ireland will hope to continue their winning ways when they head to Twickenham in two weeks’ time to face England before a double-header against current Six Nations Grand Slam winners Wales.

Related Topics:6 NationsEnglandFeaturedIrelandItalyWales
Up Next