Fourteen-man South Africa produced a commanding performance at Twickenham to end the Castle Lager Outgoing tour on a high note with a 27-13 (halftime 14-3) victory over an outclassed England on Saturday.

Replacement prop Thomas du Toit was sent off for a high tackle with 20 minutes remaining to suggest that the game might be back in the melting pot. Although the Boks led 27-6 at that point, England had come back from a 19-point deficit to draw with the All Blacks seven days earlier.

But there was to be no ‘miracle’ for the home team this time; no last-minute disappointment as was suffered here a year ago or by a 14-man Boks in Marseille three weeks ago. It was a massive statement of depth and intent as a mix-and-match combination showed resolve and great composure to close out the game against an ultimately confounded home team.

A Springbok team shorn of backline regulars Handre Pollard, Lukhanyo Am and Cheslin Kolbe as well as pack stalwarts Lood de Jager and Pieter-Steph du Toit – and featuring their third-choice goal kicker in Faf de Klerk – ultimately commanded Twickenham after beginning cautiously but growing into the game with increasing confidence.

They scored two tries through the outstanding wing Kurt-Lee Arendse – scoring in a fifth successive test – and lock Eben Etzebeth to one from Henry Slade, while flyhalf Damian Willemse dropped two goals with Faf de Klerk kicking a conversion and three penalties.

South Africa’s Rugby World Cup dominance of the English pack resurfaced as scrum and maul were dominant with free-kick and penalties arriving as early as the first two scrums. De Klerk was wide with his first shot at goal from the penalty and England took the lead in the 11th minute when centre Owen Farrell was successful with his second kick at goal. Unbelievably his first attempt had gone wide from straight in front. 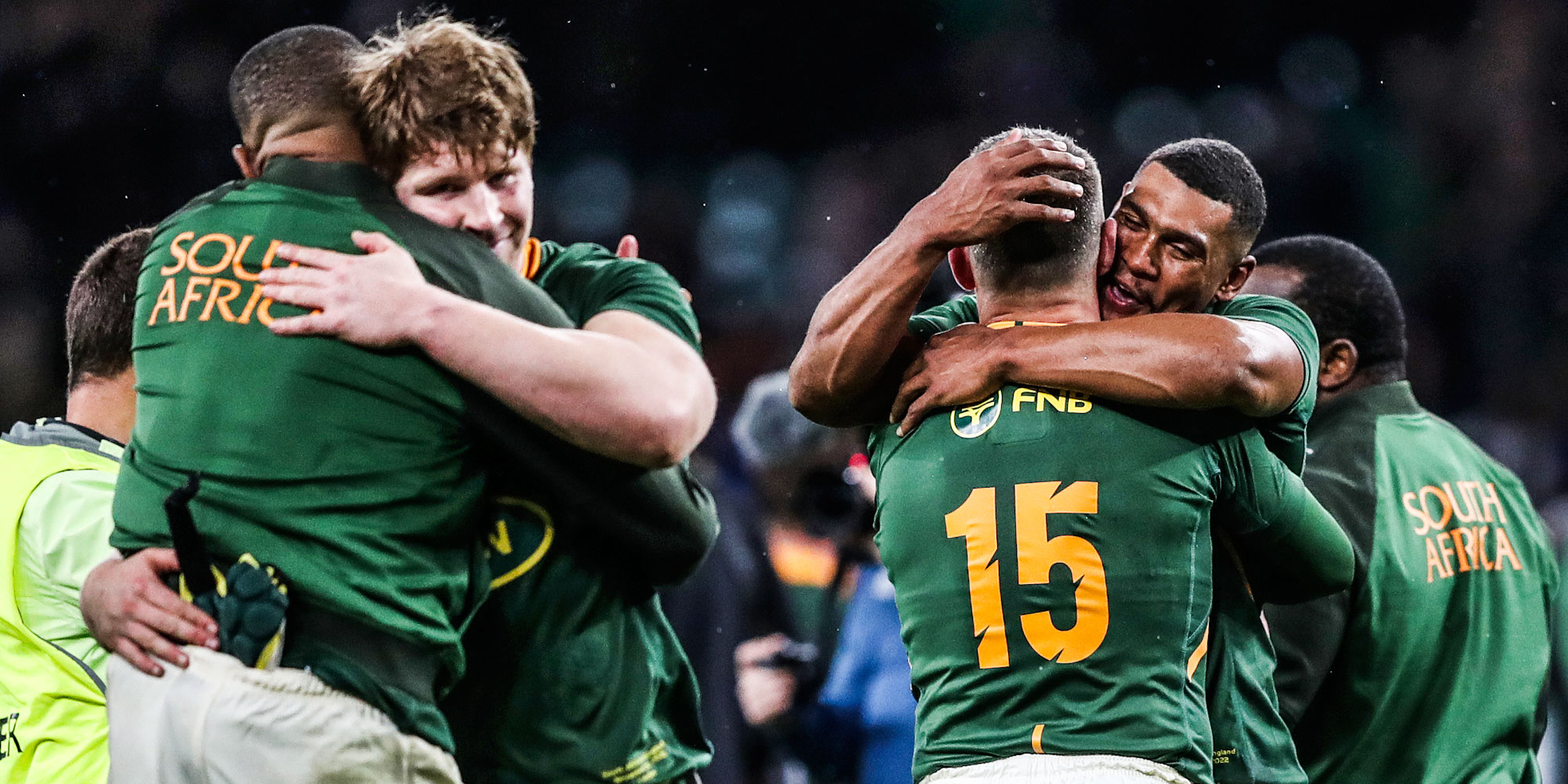 Celebrating the first Bok win over England at Twickenham since 2014.

A neck tackle on No 8 Evan Roos presented De Klerk with an easier opportunity to level the scores mid0way through the half before Farrell – to general astonishment – missed another straightforward opportunity a couple of minutes later.

But that was to be England’s last sniff of first-half points as the Springboks dominated the second quarter.

A succession of lineout drives put the England pack on a warning and one from one such drive Siya Kolisi was held up over the line (Roos did manage to ground half a second after the whistle had gone).

England’s defence was resolute however and it rook a cool 30-metre drop goal from Willemse – his first for the Springboks – to edge his team into the lead for the first time on the half hour.

England had kicked frequently and from one such bomb on to Willemse just inside his own 22 the Bok backs cut England to pieces. The Bok flyhalf evaded the chasing Freddie Steward, fed the ever-alert Willie le Roux on his inside who in turn passed to Arendse on the right-hand touchline 40 metres out. The flying wing had Marcus Smith in front of him, but an inside-outside swerve saw him speed past the flat-footed defender without being touched.

Straight from the restart South Africa again broke from deep – dummying the box kick and breaking away through Willemse and Arendse – and although it didn’t lead to points the half ended on top with De Klerk kicking his second penalty to give his team an 11-point lead (14-3).

Willemse’s comfort in the No 10 jersey was writ large when he landed a second drop two minutes into the new half with cool assurance.

Farrell cancelled it out with his second successful penalty from in front after De Klerk strayed offside, but it was a rare moment of success for England as they started clearing their bench early to try and cancel out the Boks’ firepower up front.

It di not work initially as the building pressure from a succession of lineout drives led to a yellow card for not rolling away at a ruck by loosefoward Tom Curry. Two minutes later the numerical advantage was rewarded for the Boks. England were forced onto their goal-line and the outstanding Eben Etzebeth scored under the cross bar from a metre out.

De Klerk converted and then added a fabulous penalty  from 50 metres to give the Springboks a three-score lead at 27-6. But the Springboks’ fortunes were about to change.

The Bomb Squad’s impact had been apparent with the new front row of Malcom Marx, Steven Kitshoff and Thomas du Toit extracting more scrum penalties from the English front row.

But Du Toit’s stay was short-lived as he was ed carded with 20 minutes to go for entering a tackle in an upright position and driving with his head and shoulder into England hooker Luke Cowan-Dickie.

That set up a tense final 20 minutes but the resolute, scrambling Bok defence was not to suffer the same fate as the All Blacks’ a week before at Twickenham.

Centre Henry Slade managed to cross in the period, but it was the only sighting the tryline England could manufacture as they trudged from the field, baffled, and beaten.

The All Blacks will play two Tests on home turf this year against South Africa in Auckland and Australia in Dunedin.

The Lipovitan-D Rugby Championship 2023 schedule will see the All Blacks play South Africa at Mt Smart Stadium, Auckland on Saturday 15 July. The Bledisloe Cup returns to Dunedin for the first time since 2017, in a rare afternoon home Test match (2.35PM kick off) for the All Blacks at Forsyth Barr Stadium on 5 August.

“The Rugby Championship is an exciting but tough draw.”

“Playing the Argentinians in Argentina is an exciting challenge after not being there since 2019. With the challenges of stadium availability in Australasia, we are delighted to play this huge South African Test at Mt Smart. We believe it’s key for the connection with our fans to have this massive game in our backyard and can’t wait.

“The Dunedin Test is also equally important for us because it’s our last chance to play in front of our fans before we head off for an exciting Rugby World Cup.”

The two home Tests will be part of a 2023 schedule which will see the All Blacks play five Tests in the build up to the Rugby World Cup in France in September.

New Zealand Rugby (NZR) Head of Professional Rugby and Performance Chris Lendrum said it was important to the All Blacks to be able to play in Aotearoa in a Rugby World Cup year.

“Although there is a shortened Rugby Championship schedule, there will no doubt be an edge to the Test matches played this year. The Rugby Championship and Bledisloe Cup remain vitally important to New Zealand Rugby, I know Foz [Foster] and the team are looking forward to the season kicking off as they continue to build ahead of the Rugby World Cup in September.”

The All Blacks Test matches will be broadcast exclusive to Sky, live and on demand. Pre-sale and public sale tickets to the All Blacks Test Matches will go on sale in early May, with exact dates to be confirmed. The Black Ferns schedule will also be announced in due course.

About the Bledisloe Cup

Lord Bledisloe, Governor General of New Zealand from 1930 to 1935, bequeathed a trophy to the New Zealand Rugby Union with his name on it for perpetual competition between the All Blacks and Wallabies. The two countries have been playing for the Bledisloe Cup since 1931 and it is the symbol of trans-Tasman supremacy in rugby union.

The All Blacks are current holders of the Bledisloe Cup.