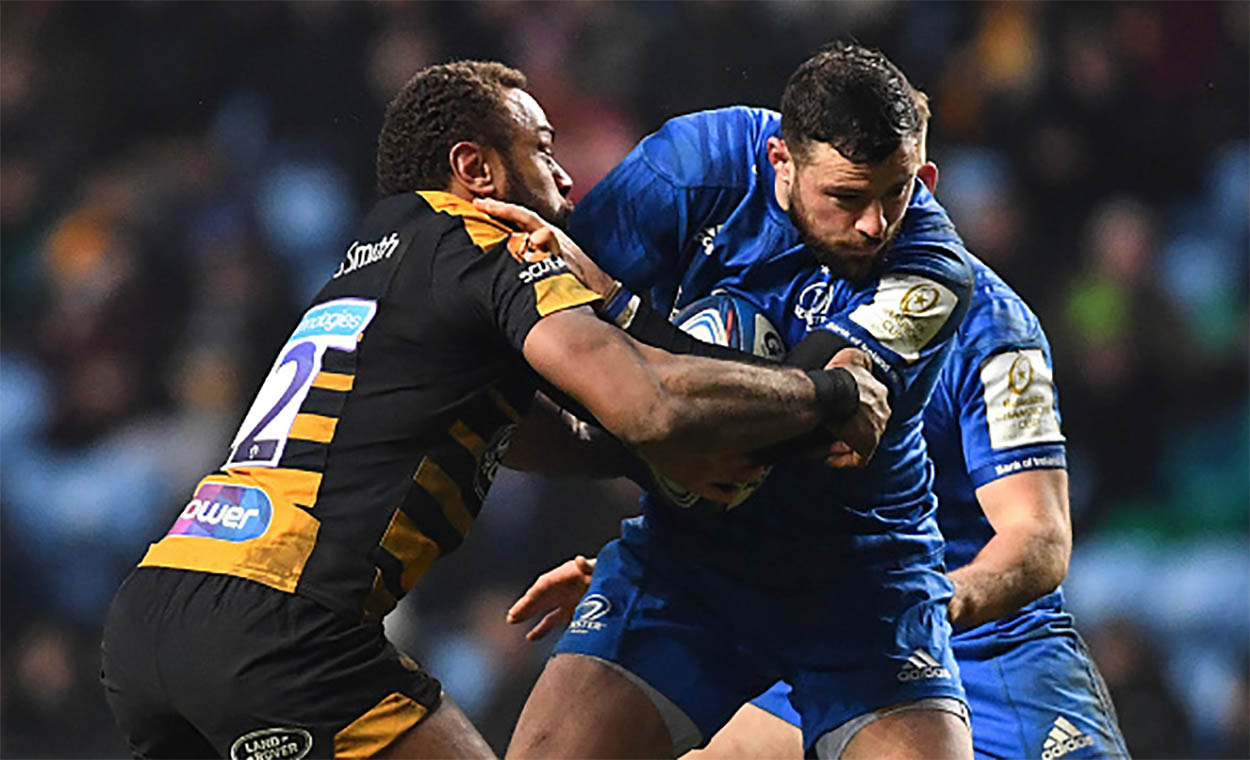 Leinster cruised to a home Heineken Champions Cup quarter-final with Ulster, after beating Wasps in Coventry on Sunday.

The reigning champions showed their class with the game finishing 37-19 in their favour.

The result ensured they finished top of pool 1 and has set up the first all Irish quarter-final in the competition since Ulster saw off Munster in 2012.

That year Ulster went all the way to the final, only to lose to their opponents Leinster 42-14.

Leinster knew that they had qualified for the last eight before kick-off thanks to Edinburgh’s win on Friday night, but they still had work to do to secure top spot.

They started well with Ross Byrne kicking a 12th minute penalty before they claimed the opening try four minutes later.

After some great work in the Wasps 22, they worked the ball out towards Dave Kearney who almost found the line but was held just short. However, within seconds, Garry Ringrose showed Nathan Hughes his dancing feet and pounced over the line.

Byrne kicked that conversion, along with another penalty to leave the score at 13-0 by the 28th minute.

In the 34th minute Sean Cronin bundled his way over from the back of a maul, with Byrne adding the extras for a 20-0 half-time lead.

The second-half was more even with Hughes heading over for the hosts 12 minutes in.

By the 58th minute Leinster had restored their 20-point lead, with Cronin repeating his first half party piece, while scoring his 6th try in this year’s competition already.

Five minutes later and Wasps were over again, with Dan Robson bursting through the defence to get on the score sheet.

Heading towards the final 10 minutes and Noel Reid banished any hopes of a Wasps comeback. Some brilliant offloading, and ball skills resulting in Max Deegan sending the substitute over, with Reid converting.

With two minutes remaining Marcus Watson jumped over the line for the home side after claiming the ball with an incredible catch.

Reid scored a last-minute penalty for Leinster to settle the 37-19 score line.

After the match Wasps rugby director Dai Young applauded his team’s effort but admitted that Leinster will be tough for anyone to stop.

“It is still hurting at the minute, but you have got to give Leinster credit. They are a fantastic team, and they are going to take some beating in this competition again”, said Young.

The win showed just how good Leinster can be going forward, but there were some cracks in the defence that Ulster and other teams will be looking at.

What’s certain is that Irish rugby fans are in for another treat when the two meet with a place in the semi-finals at steak.

The Ulster match-day squad has been named for the Second Leg of the Heineken Champions Cup Round of 16 versus Toulouse at Kingspan Stadium on Saturday evening.

Nick Timoney will make his 100th appearance for the Ulster men, as he is named to start at openside – with Marcus Rea at blindside and Duane Vermeulen at Number Eight. Andrew Warwick comes in to start at loosehead, and will pack down with Rob Herring at hooker and Marty Moore at tighthead. Captain Iain Henderson will partner with Alan O’Connor in the engine room.

Mike Lowry and Rob Baloucoune, who signed new 3-year contract extensions this week, are named at full-back and on the right wing respectively. Ethan McIlroy returns to take the left-wing starting berth. Stuart McCloskey and James Hume will form the midfield partnership, and John Cooney and Billy Burns are retained at scrum-half and out-half.

Munster Rugby and the IRFU are pleased to confirm that Graham Rowntree will be promoted from Forwards Coach to the role of Head Coach from July 1, 2022.

Rowntree will commence the role of Head Coach at the start of the 2022/23 season after signing a two-year deal.

The former England prop made the move to Limerick in October 2019 on completion of his Rugby World Cup coaching duties with Georgia Rugby.

In his third season as Forwards Coach Graham and family have settled well into Limerick life, noting earlier this year, “I have made my thoughts about this club widely known throughout my time so far, and for me and my family it really has been an easy decision, a non-decision if truth be told.

“We’ve put down roots here and have no desire to move anywhere else.”

Working closely with the IRFU, the province will advance with next steps in securing the backroom team that will work with Graham from next season as Head Coach Johann van Graan, Senior Coach Stephen Larkham, and Defence Coach JP Ferreira depart the province at the end of June.

IRFU Performance Director, David Nucifora, commented, “I would like to thank the Munster Professional Game Committee for their work and diligence during this process.

“It is important that Munster have someone who understands the unique history and culture of the club and has the experience to maximise the talent in the squad.

“Graham was very impressive throughout this process and demonstrated he has the capabilities to spearhead the next chapter of Munster Rugby.”

On confirmation of the promotion, Graham Rowntree added, “I am hugely honoured to be taking over the role of Head Coach for a club of this calibre, one that means so much to me and my family.

“We have thoroughly enjoyed every moment here and I fortunately get to work with an incredible group of staff and players who share a common goal each day in striving for success for this club.

“I’ve talked about our fantastic supporters before and again at the weekend we stepped off the bus to a huge red welcome in Exeter. Who doesn’t want to be part of that, that’s special!

“I believe we have the established structures in place with the resources and facilities to match and that it will be a smooth transition for the coaching ticket we assemble in ensuring continued development and success for this club.

“Before then I have a role to complete this season and working closely with Johann, Steve, and JP is the immediate focus and priority for now.”

Commenting on the appointment, Munster Rugby CEO Ian Flanagan said, “Graham’s extensive coaching experience and knowledge for the game makes him the perfect candidate to lead this squad forward.

“With Graham stepping up at the start of the new season it will be a seamless and natural progression from the work that has been carried out to-date.

“For now, we will continue our focus on the remainder of this season with Graham supporting Johann and the coaching staff in achieving our goals.”

The Ulster match-day squad has been selected for the first leg of the Heineken Champions Cup Round of 16 versus Toulouse at Le Stadium on Saturday afternoon.

Ben Moxham will make his first European start for Ulster as he is named on the left wing alongside Mike Lowry at full-back and Robert Baloucoune on the right wing. Stuart McCloskey comes in to start and will partner with James Hume in the centre. Billy Burns and John Cooney return to form the half-back pairing.

The front row sees Eric O’Sullivan and Rob Herring named at loosehead and hooker, with Marty Moore retaining his place at tighthead prop. Alan O’Connor returns to pair up with captain Iain Henderson in the second row. Marcus Rea comes in at blindside flanker, with Nick Timoney and Duane Vermeulen retained at openside and Number Eight respectively.