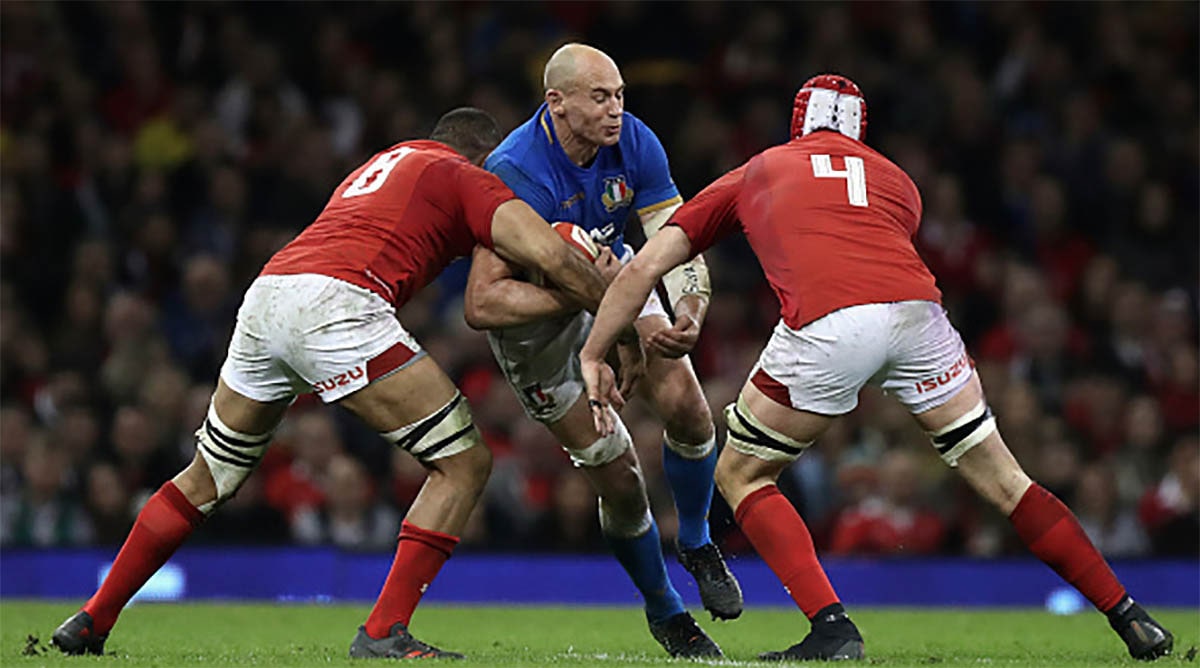 Wales have named a team for their trip to Rome on Saturday that includes 10 changes from last week’s stunning comeback victory over France.

Coach Warren Gatland made the same number of changes for the match against Italy last year, which saw Wales run out as 38-14 winners.

They take on an Italian side that will be looking to build on a strong finish against Scotland at Murrayfield last week.

Despite a 33-20 loss, Italy will take confidence from the fact they were able to score three tries and were close to a fourth in the final moments.

Among the 10 players Gatland has brought in for this game, four will be making their 6 Nations debuts. Flankers Thomas Young and Aaron Wainwright, scrum-half Aled Davies, and wing Jonah Holmes will all be making their first appearances in the tournament.

Second-row Alun Wyn Jones has been dropped to the bench, and will hand captaincy duties over to centre Jonathan Davies, who will be leading his country for the first time.

Josh Navidi retains his place in the back-row, but switches to number eight, with lock Adam Beard the only other forward surviving from 24-19 win in Paris.

Dan Biggar starts at fly-half, and Owen Watkin will join skipper Davies in the centres.

George North, who scored twice against the French, has dropped to the bench as he nurses a shoulder injury that has limited his involvement in Wales’ training in Nice this week. He is replaced by debutant Holmes.

Gatland, who was criticised last year for the number of changes he made against Italy, has remained unfazed amid more concern about his team.

“I’ve never been a person who has worried about external influences,” said Gatland.

“People can say, write or imply whatever they like.”

“It doesn’t change the fact that we’ve been put into a role to make what we think are the best decisions.”

“It’s a challenge this year, making changes. Guys have got to go out there and prove themselves.”

Italy have made just two changes from the side that lost at Murrayfield, with Tommaso Castello and Andrea Lovotti dropping out.

Nicola Quaglio starts at prop ahead of Lovotti.

Captain Sergio Parisse will add to his record 66 appearances in the Championship; he overtook Brian O’Driscoll last week.

Following the defeat to Scotland, Parisse was keen to highlight his sides ability when they are possession, even if they do struggle defensively.

“If we had the possession we are dangerous; we can score tries,” Parisse said.

“I think Scotland deserved the win; they dominated the game, had a lot of possession – more than us – so of course the last ten minutes is a good base to work on for the game next week against Wales.”

Meanwhile Padovani, who scored the second of Italy’s tries last week after coming on as a substitute, has called for his side to continue their discipline against Wales.

“Well, we will have to first improve the performance and keep the discipline under control, which went well with Scotland,” he said.

“Obviously you will need to play a lot more in their half of the field and express a greater volume of play, controlling more possession and above all, as mentioned, managing to be more precise in our performance: especially inside the 22 metres and in the decisive stages of the match.

“Then we need to show ourselves in contact and in the one-on-one, both in attack and defence.”

It is hard to see how Italy will beat Wales on Saturday, despite the wholesale changes Warren Gatland has made. He made the same number of changes last year and Wales won comfortably 38-14.

He is one of the best coaches in the world and it would be foolish to doubt his decision making at this level. The players coming in, though inexperienced, have more than enough ability to overcome the Italians.

It will be interesting to see how the cope without influential captain Alun Wyn Jones, but Jonathan Davies is a capable stand in.

Italy will be hoping that star man Sergio Parisse will be able to rattle the cages of the two inexperienced Wales flankers, who will have to be at their best to keep the marauding number eight quiet.

If Parisse can secure Italy enough ball early on, they will hope they can recreate their flowing attacking rugby from the last 10 minutes in Scotland.

If the young Welsh side then begins to panic, then this game will be far from a foregone conclusion.

Despite this, Wales still have a strong bench, which will be beneficial should this game be closer than Gatland would prefer entering the second half.

Italy are always a stern test, regardless of their finishing position each year in the Six Nations, but the match in Rome may just be another one of their ‘nearly’ moments.

Related Topics:6 NationsFeaturedFranceItalyScotlandWalesWasps
Up Next

What would a France 23 look like if it made sense?

Ben Youngs is set to make his 100th cap for his country, at scrum half – becoming the second most capped England men’s player of all time after Jason Leonard (114 caps). Youngs made his senior team debut against Scotland in March 2010, where he came on as a substitute in the Calcutta Cup.

There is also a milestone for hooker Jamie George, who will make his 50th appearance for England this weekend.

Both players will lead England out at the Stadio Olimpico. England need a bonus-point win to put them in contention for winning the tournament, depending on the result in France v Ireland, which follows the game in Rome.

Jonny Hill will make his England debut at lock, while Owen Farrell, starting at fly-half, will captain the side. Henry Slade is at inside centre while Jonathan Joseph returns for England at outside centre.

George Furbank is named at full back with Jonny May and Anthony Watson on the wings.

Sam Underhill is named at open-side flanker with Tom Curry named at blind-side flanker and Billy Vunipola, returning from injury for England for the first time since the Rugby World Cup Final, at No. 8.

Jones said: “We’ve trained with good intensity this week and the squad are excited by the challenge of performing at our best against Italy.

“The team have prepared well and are looking forward to putting on an England shirt and showing what they can do.

“We will also celebrate two major achievements in Ben Youngs and Jamie George’s cap milestones. It’s testimony to their skill, hard work and love of playing for England, and there is more to come from both of them.”