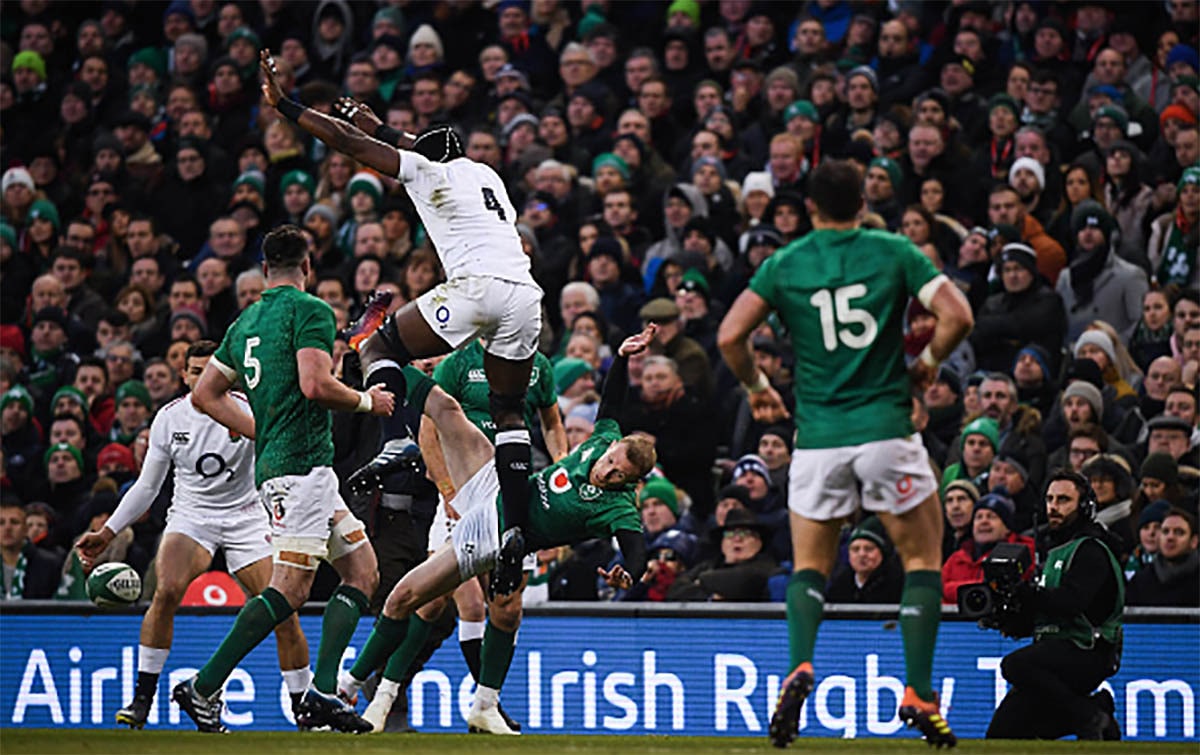 We put the question out to our Facebook, Twitter and Instagram followers – “Should this have been more than a penalty after Maro Itoje and Keith Earls collided in the air?”

To say we got a mixed response would be an understatement.

Here’s the incident in question.

If Curry hadnt have been binned at that time I wouldnt mind betting Itoje would’ve had a spell in there.He was a good few metres beyond the ball when he took Earls out so he cant use having his eye on the ball as an excuse for the collision.

Thought it was a harsh pen to be honest. Both competing. Mark was just penalised because he’s got about 8″ and 3 stone on him

*I* was closer to the ball than #Itoje ?

Firstly, England the better the team and deserved winners but this incident along with the Manu Tuilagi incident have been major talking points since the weekend.

We’ve taken the incident and broke it into 6 pictures and do the classic, ‘say what you see’

Looking at the clip, broken down there can be no denying regardless if you are an English or Irish fan, Itoje is not in a realistic position to take the ball at any point. When the ball enters the picture, Itoje has already clattered Earls around 3m beyond the flight of the ball. Whether you believe this is deliberate and Itoje’s only intention was to collide with Earls or he simply got his timing totally wrong, the outcome should have been more than a penalty.

Below is the applicable law.

There are 4 possible outcomes. We look at each one and apply it to the play in question.

Penalty only – Fair challenge with wrong timing – No pulling down. – Not a fair challenge as Itoje has jumped around 3m beyond the flight of the ball.

Yellow card – Not a fair challenge, there is no contest and the player is pulled down landing on his back or side. – Earls is not pulled down, the momentum and weight of Itoje cause Earls to lose the collision and land on back.

Having looked at the law and the available options to the referee, ‘Play on’ and ‘Penalty only’ can not be considered as valid options in this scenario as there is no ‘fair challenge’ for the ball. Itoje was never in a to challenge for the ball as he was several metres in beyond it.

With ‘Play on’ and ‘Penalty only’ now not available options the remaining options are ‘Yellow’ or ‘Red’. This then comes down to whether you feel the collision was reckless and your interpretation of Itoje’s intentions. I personally feel that Itoje is far too good a rugby player to get his timing and positioning that wrong. Reckless is defined in the dictionary as ‘ utterly unconcerned about the consequences of some action; without caution; careless’. For me, Itoje’s actions fit that description. My interpretation of whether his actions were deliberate foul play. Again, I believe that he’s far too good a player to get it that wrong and his intention was purely to collide with Earls. According to the Laws and based on my of reckless and deliberate foul play this would be a red card decision.

As an English I feel this would have been a harsh decision and even as an Irish fan, I would feel this would be a little harsh but for the ref to give a penalty and not even refer it to the TMO I feel was a mistake. Perhaps some of the Twitter responses were right and the decision to Sin Bin Tom Curry (harshly in my opinion) came into the equation on this decision.

If you were the man in the middle on Saturday, how would you have dealt with the incident. Vote below:

Related Topics:6 NationsEnglandFeaturedIrelandMaro Itoje
Up Next

It gets worse for Ireland. 2 more stars ruled out.