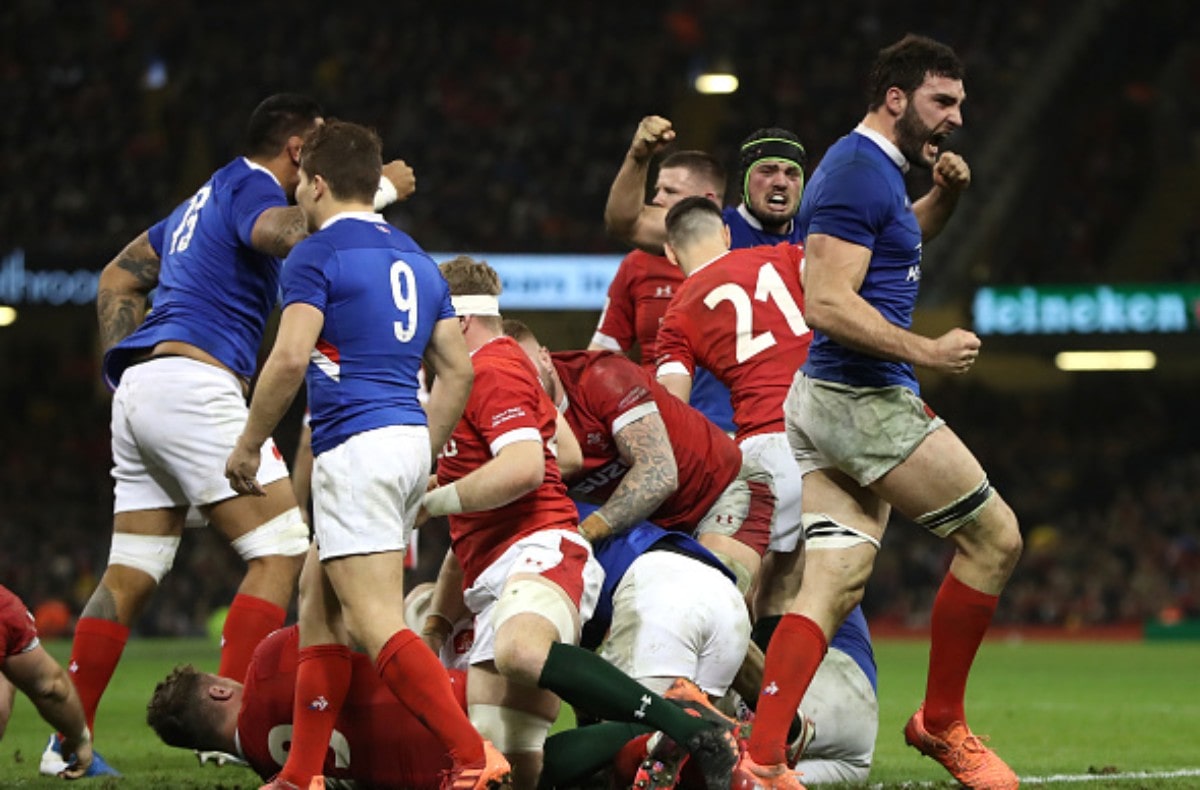 France have come out 27-23 winners in a Six Nations classic against Wales at the Principality Stadium this evening to keep their Grand Slam hopes alive.

In what was an end to end game the visitors managed to sneak past their hosts despite spending a quarter of the game with a man less in what was a remarkable performance.

It was Wales who made a more positive start to the game and were rewarded early on as fly-half Dan Biggar smashed over a penalty from 35-metres out to put the hosts in front.

However, France came roaring back and within a couple of minutes they went over for the opening try of the game as Leigh Halfpenny failed to cope with a kick from Romain Ntamack, which French full-back Anthony Bouthier gathered up the ball and raced under the posts. Ntamack knocked the conversion through the posts to hand the away side the lead.

The fly-half put further distance between the two sides on 18 minutes as he sent a lovely penalty kick between the uprights to put Les Bleus 10-3 up.

With 26 minutes on the clock Biggar cut into the visitors lead as he slotted a simple penalty over to make it 10-6.

France once again came back after Wales scored and struck for their second try just before the half-hour mark as they took down a line-out inside the Welsh 22 before lock Paul Willemse peeled off the maul and burst through two tacklers to touch-down in the left corner. Ntamack thumped the extras over once more to stretch the lead out to 17-6.

Four minutes later and Wales looked as though they were going to get in for a five-pointer themselves, but had to settle for another three-points from the boot of Biggar, who kicked another penalty.

With a minute left in the half France were reduced to 14-men as No 8 Gregory Alldritt was shown a yellow-card after the French conceded a number of penalties in quick succession.

Wales pounded away at the opposition for over five minutes after the clock had gone into the red zone, but they couldn’t take advantage as they eventually knocked-on meaning the score was 17-9 heading in at half-time, with the French showing some serious determination to keep Wales at bay at the end of the half.

France managed to cope for the remainder of the sin-binning without conceding any scores but within a couple of minutes of returning to their full compliment Wales got their try as Dillon Lewis latched onto a loose ball beside the French line and powered over beside the posts. Biggar had the simple job of tipping over the conversion to make it a one-point game at 17-16 to France.

The away side put themselves further in front with just under 30 minutes left on the clock as Ntamack intercepted a pass down Wales’ left as they looked to attack and he charged down the field to put the ball down for the try. He converted his own score to put France 24-17 ahead.

France extended their lead on 64 minutes as Ntamack blasted a long-range penalty over to leave the score at 27-16 to the visitors heading into the final quarter of an hour.

The away team were reduced to 14-men for the second time in the game as Mohamed Haouas was shown yellow after Wales won several penalties at scrum-time. However, there was a huge momentum swing at the next scrum as Damba Bamba came in and helped his side win a scrum against the head on their own five-metre line despite having centre Gael Fickou at No 8.

Wales set up a grandstand finish with five minutes left however, as they broke into the French 22 again and this time they weren’t to be stopped as Biggar crashed over the line from close-range. Following a TMO review the try was awarded and he like Ntamack converted his own try to put them within touching distance of a result with the score at 27-23.

Despite Wales throwing their all at the French over the final minutes they couldn’t find a way through meaning France claimed a first win on Welsh soil since 2010.

Next up for Wales is another tough test as they head to Twickenham to face England, while France will look to keep their Grand Slam hopes alive when they take on Scotland at Murrayfield.

Related Topics:6 NationsEnglandFeaturedFranceScotlandWales
Up Next