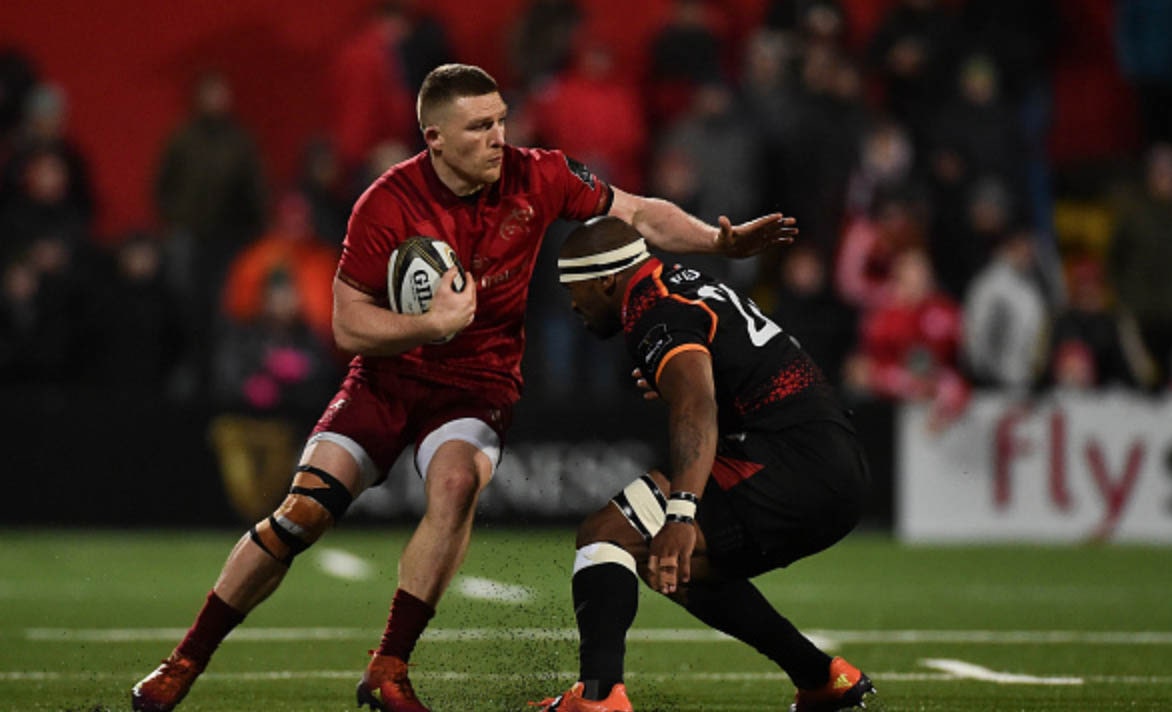 Munster secured a bonus-point 43-0 win over the Southern Kings at Irish Independent Park on Friday night and they didn’t need to hit top form.

The win now means that Munster remain top of Conference A while the Kings are rock bottom of Conference B with only two wins this season.

With five internationals back for Munster it was actually the visitors who got off to a good start to the game with breaks from the likes of Martinus Burger and Michael Willlemse showing their attacking qualities.

However, it was the hosts that struck first with Neil Cronin diving over in the 13th minute. With Rory Scannell converting in front of the posts for a 7-0 lead.

From there the Kings frustrated Munster for a large period of the half following that try but Munster also caused their own downfall with a number of mistakes.

The visitors No 8 Ruaan Lerm was sin-binned after 35 minutes as he took out Cronin in a ruck.

That yellow card left more space for Munster and within a couple of minutes, Andrew Conway was in for try number two following some great work from Jean Kleyn and Tyler Bleyendaal.

HT | @NeilCronin92, with his first Munster try, and Andrew Conway touch down in the first half as @Scannell_Rory12 kicks a conversion to give Munster a 12-point lead.#MUNvKIN #SUAF ? pic.twitter.com/wq5cXwjXoP

The second half began as a scrappy affair until kicks from Conway and Alby Mathewson in the 53rd minute sent Darren Sweetnam rushing over the line and Scannell converted to push them out to a 19-point lead.

On the hour mark, Billy Holland secured the bonus-point try after a couple of quick carries from Arno Botha. The two points were missed meaning it stayed at 24-0 heading into the final quarter.

The last 20 minutes were dominated by the hosts and replacement Luke Marshell added try number five from a maul which was converted by Scannell once more.

Kings subs Tertius Kruger and Andisa Ntstila were binned for a high tackle on Sweetnam and a tip tackle on Conway respectively.

Man of the match Kleyn got in on the scoring act with 10 minutes remaining, but the extras were missed.

Scannell made up for his missed kicks with a last-minute try of his own which he converted himself to leave the score at 43-0.

The biggest upset of the night was seeing Chris Farrell come off after 18 minutes with a knee injury which is a worry for both Munster and Ireland.

“I think Chris just tweaked his knee on a carry. We already had it strapped beforehand so it is just precautionary at this stage,” he said.

Cronin also spoke after the game about his team’s content at winning the match.

“We knew what we had to do to win but they didn’t make it easy for us, so we’re delighted with the five points,” he said.

The win leaves Munster seven points clear at the top of conference A for now, while the Kings remain joint-bottom of Conference B with only 19 points.

Next up for the men in red is a trip to Wales to face the Ospreys, while the Kings continue their tour of the northern hemisphere with another tough test away to reigning champions Leinster.