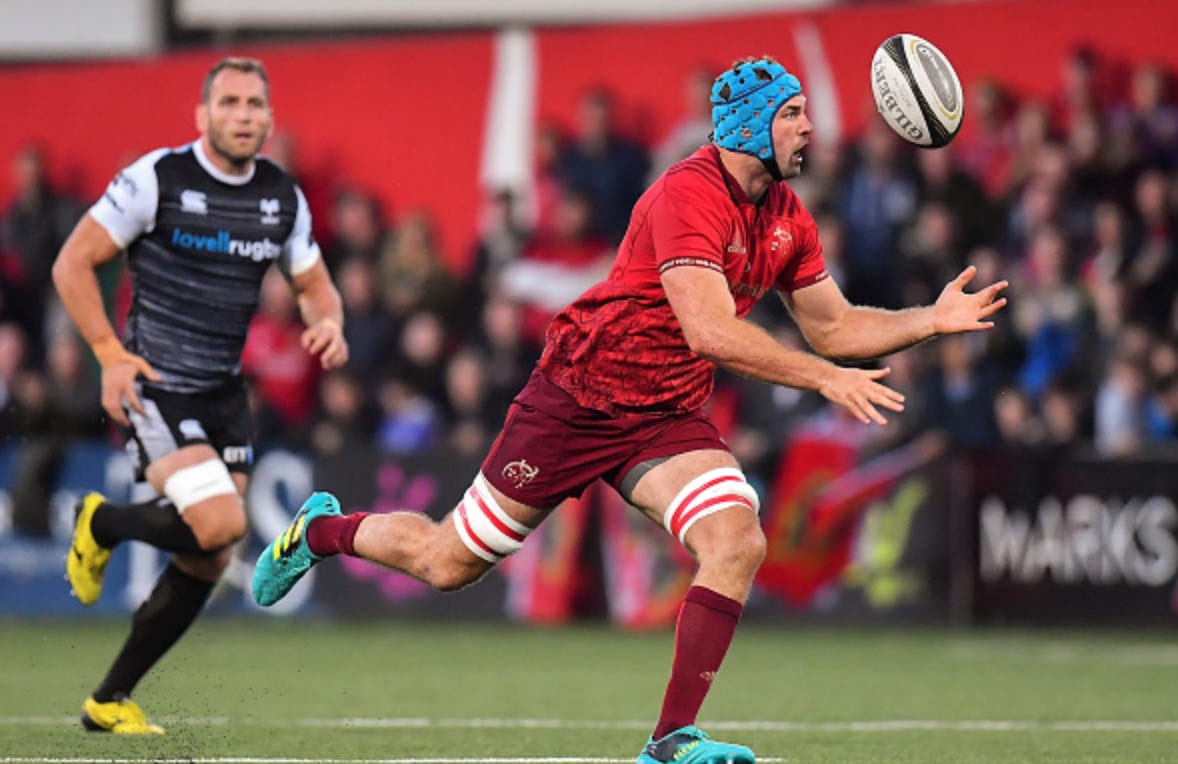 Munster maintained their good form with a 19-13 win over the Ospreys at the Liberty Stadium on Friday.

Before the game there was one change to the line-up with Tadhg Beirne being named in the starting XV after Jean Kleyn missed out through illness.

The away side started the brighter and were rewarded for their efforts five minutes in when JJ Hanrahan sent a beautiful floated pass over to Darren Sweetnam on the left wing, who rushed past a couple of defenders to touch down.

Hanrahan added the extras and it was 7-0 in the blink of an eye.

18 minutes in and the Ospreys were level as Hanno Dirksen getting over following a Keelan Giles break and chip allowed him through the Munster defence.

Luke Price was on hand to slot over the conversion and the teams were level.

The hosts took the lead in the 32nd minute thanks to a Price penalty.

However, their lead didn’t last too long as Munster put on the pressure, with man of the match Beirne eventually breaking through and looking to touch down off the bottom off the post only for the ball to be knocked away by Sam Cross.

MOTM | There's no off button for this guy! 🏅

Another 80 minute man of the match performance from Tadhg Beirne after coming in as a late starter after a 5-week injury lay off 💪#OSPvMUN #SUAF pic.twitter.com/6MV4OCOiyx

After a review from the TMO, a penalty try and yellow card were awarded and it was 14-10 to Munster at half-time.

HT | Munster are just ahead at the Liberty Stadium thanks to a @D93sweets try converted by @JjHanrahan & a penalty try in the opening forty.#OSPvMUN #SUAF pic.twitter.com/Rq33I2h07L

The second-half was a tough affair and it took another Price penalty to open the scoring in the 62nd minute. At that stage the Ospreys were within a point of Munster, but the reds marched on.

With the pack making some hard yards, Bill Johnston sent the ball out wide left to Mike Haley, who recorded their third try of the night.

The conversion was missed, but Munster held out for a hard-fought 19-13 win.

The win means Munster remain top of Conference A, a point ahead of Glasgow Warriors, who defeated Connacht tonight. While the Ospreys stay fourth for now having played a game more than both the Cardiff Blues and the Cheetahs.

Next up for the Ospreys is a visit to Connacht next weekend, while Munster travel to the Scarlets seeking to keep pushing for that top spot come the end of the season.

Ulster named side to take on Zebre

Munster and Ireland out-half Joey Carbery has admitted he is more than “devastated” following the news that he will be sidelined through injury once again.

Carbery, who had an injury-hit 2019, suffering hamstring injuries that kept him out of large parts of the end of last season, before picking up an ankle injury before Ireland’s Rugby World Cup campaign, suffered a wrist ligament injury during last weekend’s loss to Ulster and will now likely miss the start of Ireland’s Six Nations campaign.

The fly-half took to social media after the news broke to thank fans for their support during a tough time in his career.

“Devastation doesn’t even describe how I’m feeling. Thanks for all the well wishes. Been a tough couple of months physically and mentally, and thought I was in the clear. But will be back soon, better than ever,” he said on Instagram.

It was announced by Munster that the Ireland star will undergo surgery on the injury and he appears set to miss their last two Champions Cup Pool stage matches along with the games with the national team.

His start against the northern province was his first since last season’s PRO14 semi-final loss to Leinster in May and now fans will have to wait once again for their key man to return to action.

It is a cruel blow for Carbery, who looked to be in line for a starting role for Ireland in the first couple of rounds of the Six Nations with first-choice fly-half Johnny Sexton also currently sidelined with injury.

Leinster’s Ross Byrne now appears set to be handed the reins at No 10 for the men in green and if he takes his chance Carbery could find it even harder to get back into the team.