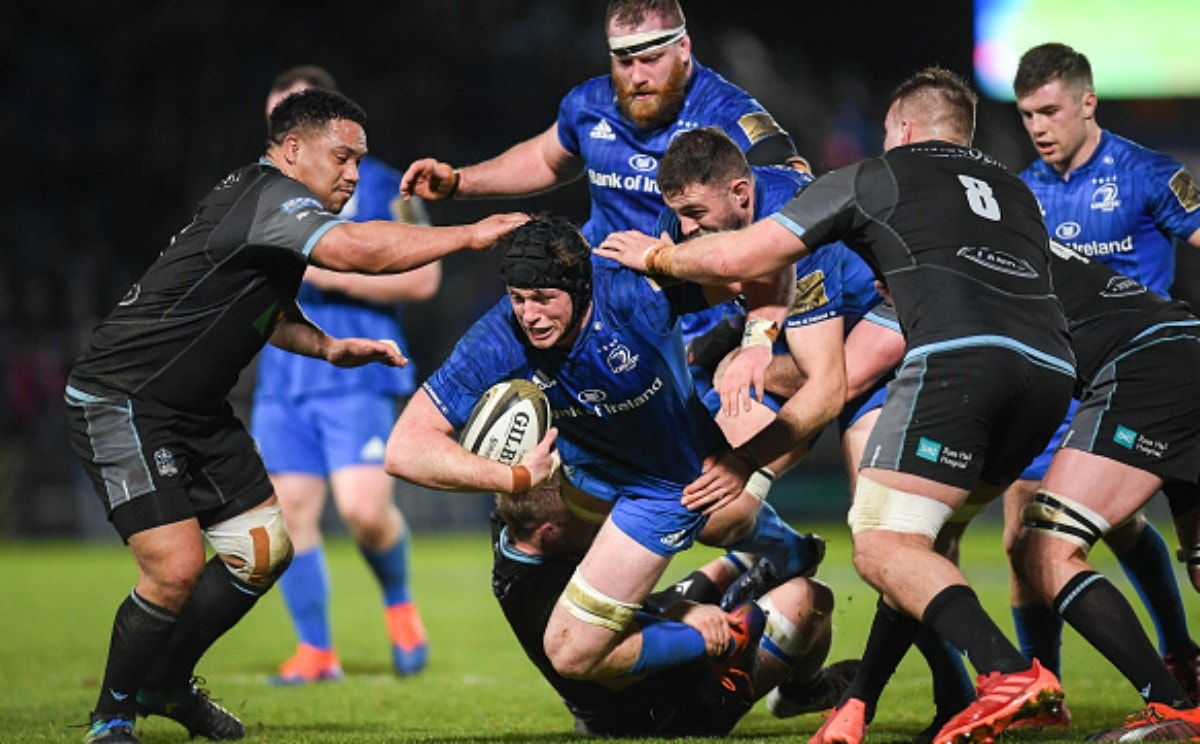 Leinster have continued their winning streak this season with a dominant 55-19 victory over the Glasgow Warriors in the PRO14 at the RDS tonight.

A hat-trick of tries from man of the match second-row Ryan Baird along with another hat-trick for Dave Kearney and brace from James Lowe plus a try for Scott Fardy saw the hosts ease to victory once again.

Leinster made the perfect start going through the phases following a scrum just outside the Glasgow 22 and youngster Ryan Baird barged over the line from close-range. Harry Byrne slotted over the conversion to make it 7-0 with only four minutes on the clock.

Things only got worse for the visitors less than 10 minutes later as they gave the ball away near their own 22, allowing Leinster to bring the ball forward and after a number of phases with a penalty advantage coming Byrne sent a long-pass out to Dave Kearney who touched down in the right corner. Bryne couldn’t provide the extras this time around leaving it at 12-0.

However, the Warriors had the better of the possession over the next few minutes and Leinster were punished on 26 minutes, as the away side broke from the back of scrum before a quick pass off a ruck found Tommy Seymour, who ran a beautiful line to race over the line and touch down. Peter Horne converted to cut the lead down to 12-7.

Leinster came roaring back though and were in for their third try just after the half hour mark as they struck down the blindside with lovely hands from Byrne to Fardy, who sent it to James Lowe who waltzed in for the five-pointer. Byrne found his range from the tee once again to make it 19-7.

With the clock in red the hosts secured the bonus-point try as they went through a couple of phases off the back of a line-out five-metres out from the opposition line with captain Fardy eventually barrelling over. Byrne was off target with the kick meaning it was 24-7 in favour of the home side come the half-time whistle.

Despite Leinster’s dominance in the closing stages it was the Warriors who had the better opening in the second period and Kyle Steyn finished a lovely move down the left wing with some great hands from his teammates in the build-up to put him darting home. Horne couldn’t convert this time around to make it 24-12 with only three minutes gone in the half.

Although that score was cancelled out on 52 minutes as Lowe was trundling down the left wing and despite the defence’s best efforts the No 11 held them off to put the ball down for his second try of the game. Byrne again misplaced his kick to leave it at 29-12.

Five minutes later and they were further ahead as Baird was sent through a gap in the midfield just inside the opposition half and the second-row out paced everyone to touch-down under the posts. Byrne provided the extras this time around to extend the advantage.

With 15 minutes remaining Baird secured a well deserved hat-trick as he broke down the short-side from five-meters out to score the try. Replacement fly-half Ciaran Frawley couldn’t squeeze the kick between the posts from the right-hand touchline meaning it stayed 41-12 heading into the closing stages.

The Warriors managed to score another try as the clock ticked into the final 10 minutes as they made the most of a break in open play with a couple of lovely offloads ending up with prop Alex Allen running under the posts. Ruairidh Jackson kicked the conversion.

Leinster weren’t finished in the try department however as they charged forward once again with less than five minutes left and Fardy fed Kearney down the left-wing to jog in for his second five-pointer of the match. Frawley converted this time making it 48-19.

In the final moments Glasgow tried to play the ball inside their own try-line only to send a loose pass into the path of Kearney who pounced to secure a hat-trick of his own. Frawley smashed over the extra two with the last kick of the game to leave the final score at 55-19.

Next up for Conference A’s runaway leaders Leinster is a trip to South Africa to take on the Cheetahs in three weeks time as they look to maintain their winning streak, while Glasgow will head to Wales to play the Ospreys on the same day.