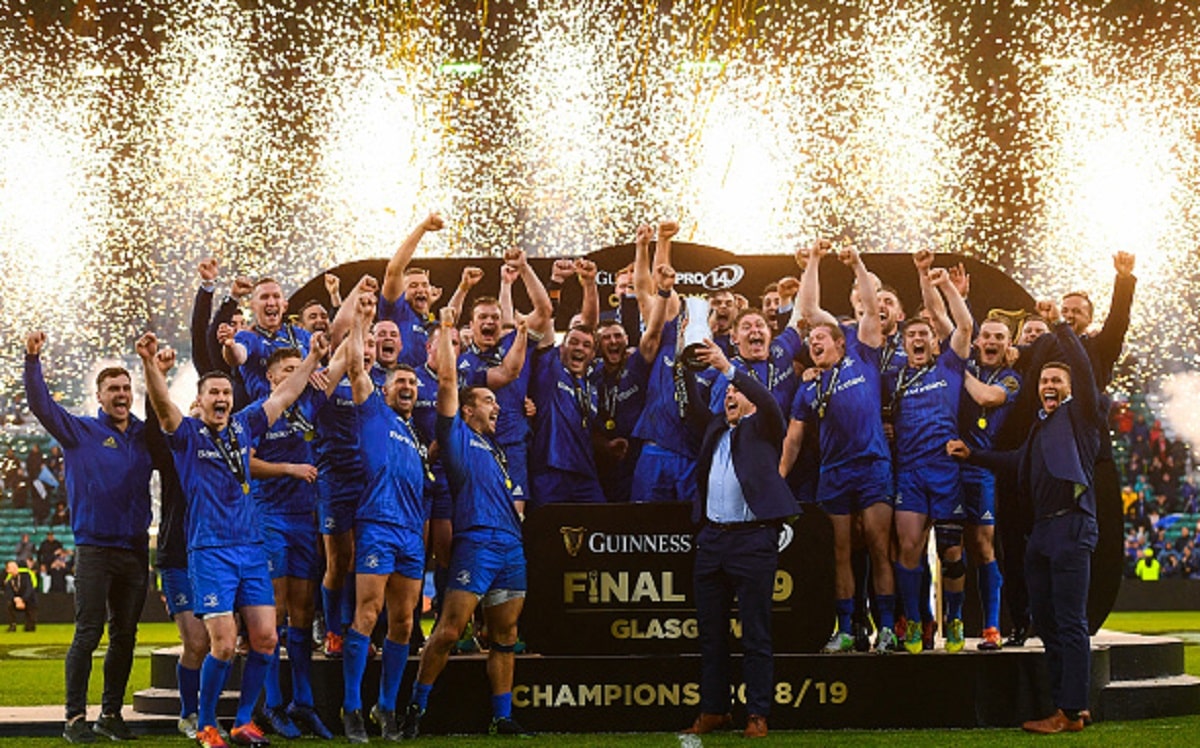 Leinster saw off a rallying Glasgow Warriors side to retain their PRO 14 title with an 18-15 win in Celtic Park on Saturday night.

The reigning champions were made to work for the victory with tries from Garry Ringrose and Cian Healy seeing them over the line inn front of a record crowd of 47,128.

The rain allowed for slippery conditions on the pitch and for the opening minutes of the game the two teams played at a blistering pace, kicking the ball from one end to the other.

Blues captain Johnny Sexton had an early chance to put them in front with a penalty directly in line with the posts however, he skewed the ball narrowly to the right of the posts.

Moments later and a brilliant kick from James Lowe allowed Rhys Ruddock to pick up the ball before sending it to Sexton as the side broke with incredible pace, only for Jack Conan to spill the ball in what looked like a certain try.

Fraser Brown took out Luke McGrath following a line-out and was lucky not to receive any punishment for tackling the man without the ball.

On 13 minutes Glasgow struck, Scott Cummings won a Leinster line-out for the Warriors and within 13 hard phases Matt Fagerson barrelled over for the opening try of the game beside the posts.

Adam Hastings had no trouble slotting over the conversion to make it 7-0.

Leinster hit back immediately, Sexton sending his kick-off long and when Stuart Hogg took an extra second to compose himself for the clearance kick McGrath was on hand to block him down.

The ball went flying backwards, but on the greasy surface it spun back towards the men in blue and Ringrose was on hand to touch-down. Sexton again sent his kick to the right of the posts and it was 7-5.

Warriors came back at a blistering pace only for Leinster to hold them out on their own line for a couple of minutes as the Scottish outfit settled for three-points from a Hastings penalty.

There were a few minutes for players to catch their breath as Brown was stretchered off after his ankle gave way at a ruck, which will be a real worry for him ahead of the World Cup later this year.

The game restarted with Leinster ball at a scrum and they executed their plan perfectly, going through 18 phases before man of the match Healy could dive over for the try. Sexton converted and suddenly it was 12-10 with 28 minutes on the clock.

With only five minutes left in the half, Sexton extended Leinster’s lead with a 47m penalty as the sides headed in 15-10 at the whistle.

Glasgow came out all guns blazing in the second-half but it was Leinster who scored first as Sexton knocked over another penalty to make it 18-10 with Kyle Steyn being sent to the bin.

Leinster camped in the Warriors 22 for the ten minutes of the sin-binning but failed to make it count as Glasgow bounced-back each time to win a penalty and clear their lines.

It looked as though that failure to score during the 10 minutes that Glasgow were down to 14-men would cost them on 66 minutes. Rob Kearney sent a Garryowen soaring and chased it only for Hogg to catch an Kearney to take him out in the air.

Kearney was sent to the bin and Hogg had just played his last moments in a Warriors jersey as he was kept off with a head injury, with a move to Exeter in the summer already confirmed.

Munch like Leinster, Glasgow made little of their one-man advantage until the 75th minute when Grant Stewart raced over in the right-corner for a try. Hastings couldn’t apply the extras but it was a three-point game with four minutes remaining.

However, despite the boos of the home crowd Leinster held Glasgow in their own half and then got a chance to hold onto the ball before sending it into the crowd as the clock hit red to win 18-15 and make it bakc-to-back titles.

After the game Sexton was full of praise for his side as he hailed their bounce-back from the 20-10 Champions Cup final defeat to Saracens.

“This keeps the Leinster momentum going. We can say we’ve been to four finals in two seasons and won three. That’s a really good return. If we’d come away from two out of four we’d be going into next season empty handed, so this changes our summer holidays. I’m very proud of the lads for the way we bounced back after what was probably the lowest point of all our careers really in terms of losing a European Cup final,” he said.

The win now means that Leinster have secured a sixth league title and there was a nice touch added when they allowed the departing Sean O’Brien to lift the trophy before he heads to London Irish in the summer.

It was a good end to the season for Leinster, who will look to do the same next year, however, for the majority of the team the next challenge on the list is the Rugby World Cup with all eyes on Japan as Ireland look to reach at least a first ever semi-final.

Could This be the End for an Irish Legend?