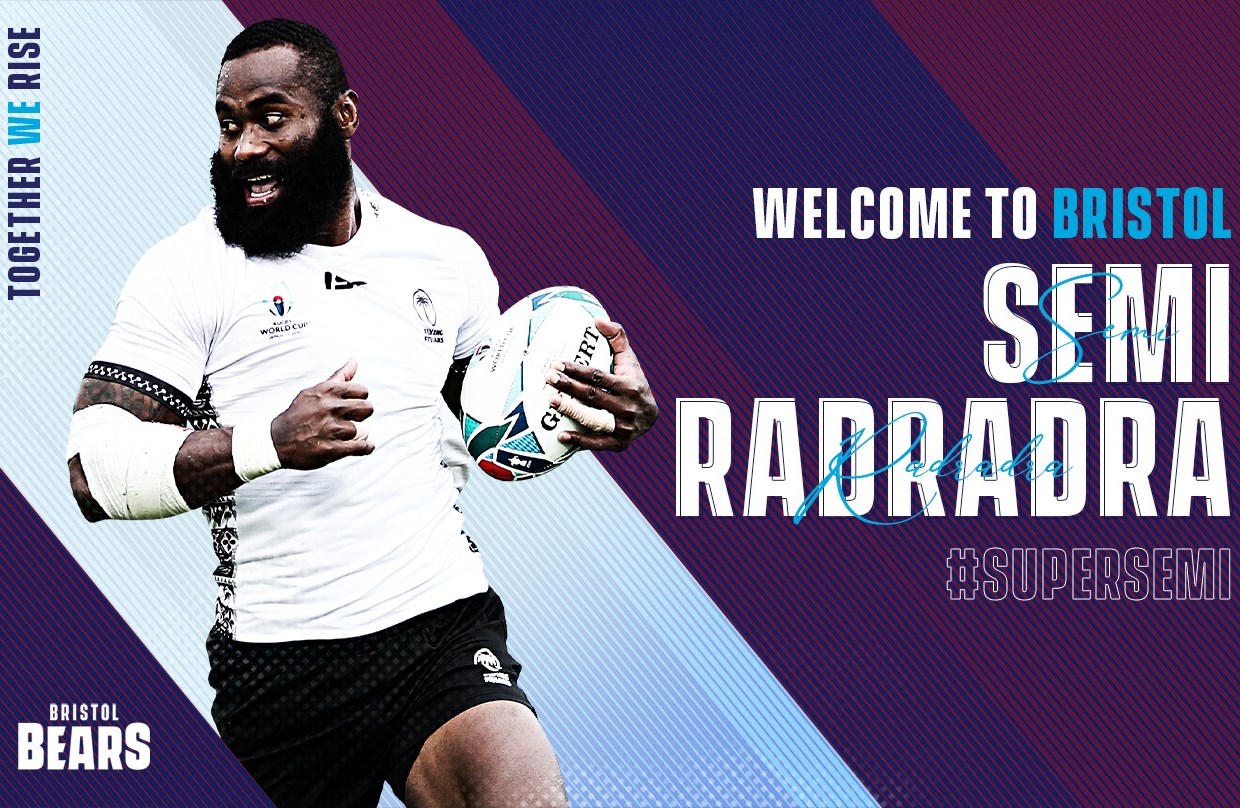 Bristol Bears stunned rugby this morning with the signing of Fijian Superstar Semi Radradra who will join the Bears next season when his contract with Bordeaux expires in June 2020.

A standout individual across both rugby codes, the Fijian international arrives at Ashton Gate on a three-year deal.

27 year-old Radradra averaged 100m a game at the 2019 Rugby World Cup, lighting up the competition pool stages with a string of sensational displays, including a brace against Georgia.

During his time in the Australian NRL (National Rugby League), Radradra was named Dally M winger of the year for two seasons in a row, scoring 82 tries in 94 games for Parramatta Eels.

“There is no doubt that Semi is one of the best players in the world – he’s truly a world class performer and we are so excited about what he can do for the team,” .

“Every top club across both codes on the planet wanted him, so for Bristol to be able to bring in a player of his quality underlines the fantastic work that the club is doing. Semi has clarity about our vision and knows what the club want to achieve. As a person and a player, he is perfect for our culture which places an emphasis on community and high performance.

“I got to know Semi well at the Barbarians and we were blown away by his professionalism and dedication. He is world class because of the relentless work and preparation he puts into his game, day in day out. It’s no surprise that he has taken the World Cup and French Top 14 by storm – Semi is the ultimate professional.

“We believe the Gallagher Premiership is the best league in the world and Semi’s arrival into the league will only enhance the product further. He’s an unstoppable force and we are looking forward to seeing him light up the competition for the next three seasons.”

Radradra has enjoyed a stellar club career so far, representing Toulon and Bordeaux in the French Top 14, following his switch from the NRL in 2016.

He added: “I’m looking forward to coming to the Premiership and to be playing under Pat Lam at Bristol Bears. They are one of the most exciting teams in Europe right now and the way that they are doing things is making everybody take notice.

“I visited the world class facilities at Ashton Gate and saw the progress of the new training ground – it’s a fantastic club to be joining with a bright future ahead. I can’t wait to get started and contributing to the Bristol Bears vision.”

As usual with Bristol, they like to do things a little differently when it comes to announcing signings or contract renewals.

The announced the signing with this ‘Good Will Hunting’ parody video.

They haven’t eased up either over the course of the morning with lots more engaging content showing off their new signing.

And potentially our favourite…

What a signing. We can’t wait to see him in the Premiership next season!

Exeter Chiefs Director of Rugby Rob Baxter remains hopeful that winger Jack Nowell will play again before the end of the current season.

Having spent much of the current campaign working his way back from surgery on his foot in October, then a hamstring tear just days before he was set to return to action, the 28-year-old is set for more time on the sidelines after picking up a knee ligament injury in Exeter’s Gallagher Premiership victory over Worcester Warriors.

In what was only his third appearance of the season, the England and British Lions winger limped out of the action during the second half of the Chiefs’ 41-10 success at Sandy Park.

In what has been a season to forget for the 28-year-old Cornishman, who has missed much of the campaign as he recovered from surgery on his foot in October, then tearing a hamstring days before he was set to return to action.

Addressing the media ahead of next week’s Premiership trip to London Irish, Baxter was able to give an update on Nowell

“We have got a few bumps and bruises this week,” said Baxter. “None of it looks long term, other than Jack Nowell who it looks like will be out for at least a few weeks. He has unfortunately sprained his MCL in that awkward tackle, just the way he fell.

“Again that is a bit of a crippling blow for him having only just got back fit and looking good and sharp. We know he had really taken his time on his rehab to get back right 100 percent so that is a disappointment for him and for us.

“I hope this won’t be the end of his season and we will see him before the end.”

Chiefs have four more regular-season games and with a play-off semi-final likely and then potential final the following week, making it a maximum of six games remaining over a seven-week time frame.

Discussing Nowell’s emotional reaction to the bad news, Baxter added: “Initially, straight after the game he was pretty distraught but he is a really positive character and he looks for the positives whenever he can.

“I had a couple of chats with him this week, one on the phone and a couple in person and all he is focusing on now is to get himself fit and available for some possible late season games. He is brilliant like that and we are going to give him every opportunity to have some more input in our season, hopefully.”

I hope you, your family and friends are all safe and well.

The last twelve months have been unlike any other we have ever faced. We’ve lived through numerous lockdowns, been forced to isolate from those we love, had our daily lives restricted in ways we never imagined and been unable to attend live sport for well over a year now. Even though matches have been taking place since last August, the impact of not having our fantastic supporters in the stadium has been felt by all of us – players, coaches and staff alike.

Clearly results haven’t been where we’d like them to be recently, with the men’s team unable to replicate the highs of last season. That’s been frustrating for all of us, as has the loss of key players to injury, but it’s part of the game and we’ll learn from the experience and come back stronger. We have a long term plan in place and inevitably there will be some bumps in the road. However, we are all excited at the potential of the squad, the wider coaching and backroom staff and have faith that we are on the right track. Our Academy is in good shape and we were delighted to add another eight under 18 players to our Senior Academy recently.

Despite the frustrations of not being as competitive as we had hoped this season, the ongoing support we have received from our fans has been incredible and is something that each and every one of us at Wasps are genuinely grateful for.

We will focus on finishing this season as strong as we can before starting to look towards the 2021-22 campaign and beyond. There is a huge amount of work going on behind the scenes to ensure we are well positioned to hit the ground running next season. An important part of our strategy will be the opening of our new elite training centre in Henley-in-Arden. The new site is currently under construction, pitches are being laid and, when complete in the summer, it will be one of the finest high-performance facilities in the game.

Away from the training ground, we are also cautiously optimistic about a return to normality at the Arena. We will of course follow the government’s roadmap, but plans are underway to reopen our conferencing, event facilities and hotel in the next week, and then the long-awaited return of you, our fans, soon after.

In line with government guidance regarding outdoor sporting events, we are now preparing for the return of supporters for our final home game of the season again Leicester Tigers on Saturday 12 June. These plans are currently being finalised and full details will be communicated once we have sign off from the various authorities regarding capacities and ticket allocations. We are anticipating being able to share this information shortly. I know the players can’t wait to see you all again and it will be great to finish the season in front of supporters.

We are well aware that we were unable to deliver three games this season, which we included as part of your Season Member Plus ticket, and the Ticket Office team will be in touch during the summer about these fixtures.

For those of you who have enquired, we kindly ask you to remain patient and to keep an eye out later this month for news on the launch of Season Memberships for 2021-22.

I would also like to take this opportunity to make you aware that the Club will be inviting supporters to join us this summer for the first in a series of fan forums. I’m keen to update you on both our on and off field plans, as well as give you the chance to meet myself and key members of the playing department to ask any questions you may have.

Thank you once again for your loyal support and look forward to seeing you soon. 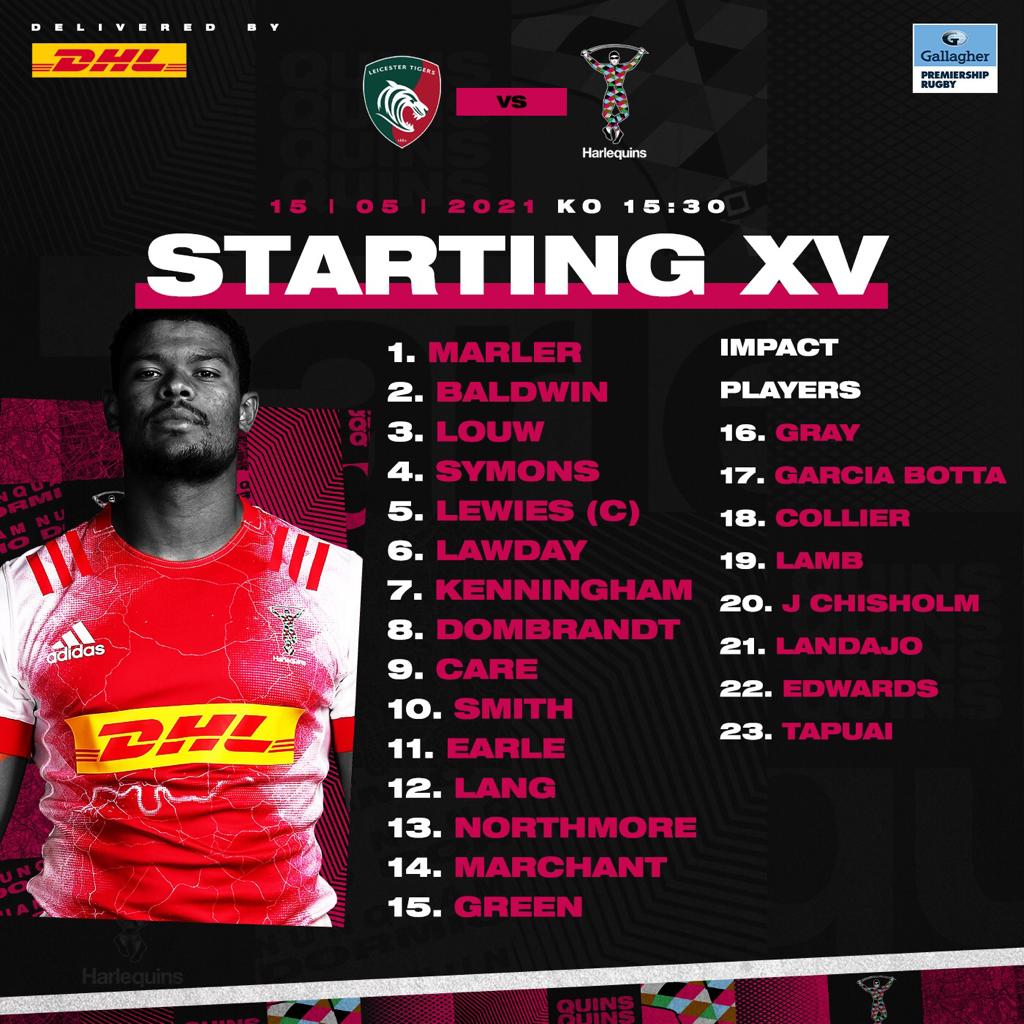 Heading into the final four rounds of the regular season, there are two changes to the starting line-up that claimed a dramatic late win over Wasps at The Stoop last weekend.Wing Nathan Earle returns to start on the left wing, replacing the injured Cadan Murley, while James Lang is also restored to the starting XV at inside centre.

A backline re-jig changes see Luke Northmore switch from the twelve to the thirteen jersey, with Joe Marchant starting on the right wing and Tyrone Green at fullback.

Back row James Chisholm returns from injury for the first time since March to take a place amongst the Impact Players, while England Sevens man Will Edwards and Australian international Ben Tapuai replace Lang and the injured Paul Lasike on the bench in the 22 and 23 jerseys respectively.

On the hunt for a fifth consecutive win against The Tigers, General Billy Millard said: “Leicester are a team that have probably returned to their old school principles of late under Steve Borthwick. They are a well-organised team with a good set-piece and kicking game, so we’re well versed with the challenge we’ll face this week.

“We’ve had a couple of changes to our team over the last month or two, but we’ve been really pleased with the level of performances we’ve seen from the players, which is a credit to the depth of our squad and the quality of the mindset the players have at the moment.

“We’re looking forward to taking each week game by game as we build towards a big finish to the season. Starting with Leicester this week.”