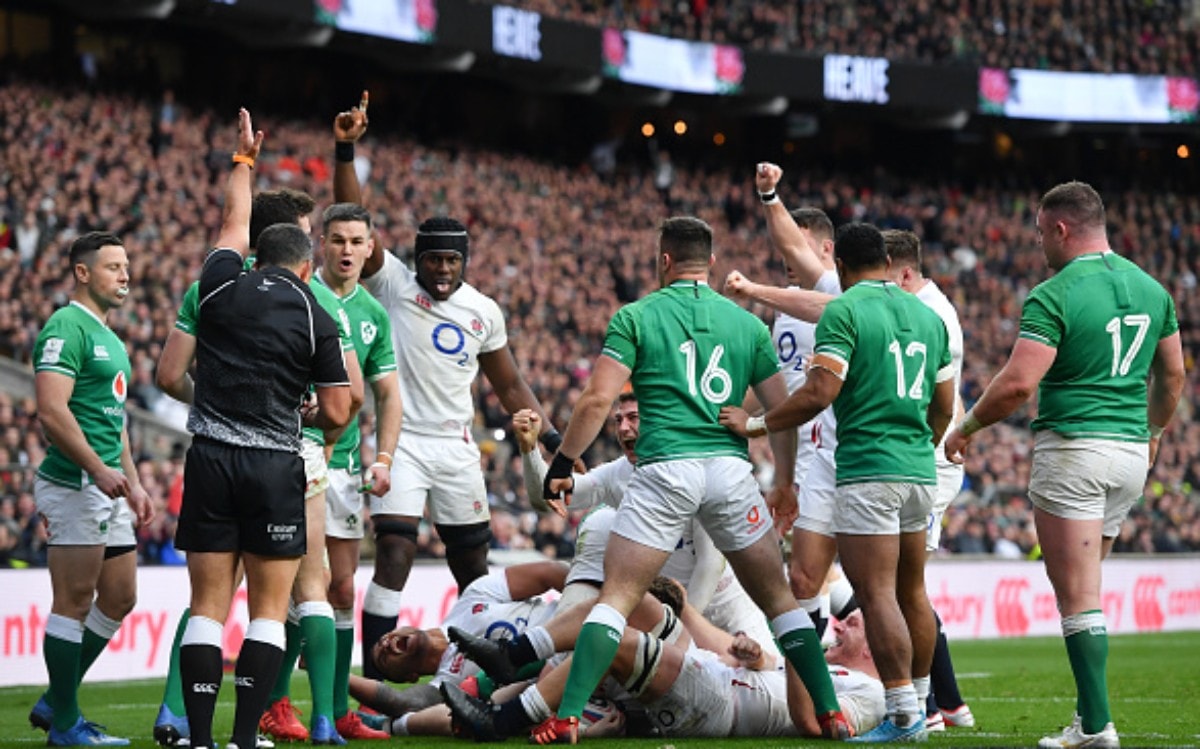 England have overcome Ireland 24-12 in a physically dominant display from the hosts at Twickenham this afternoon.

The win puts England right back into the mix for the Six Nations title, while Ireland will be disappointed with a poor showing that ends their Grand Slam hopes.

England came roaring out of the blocks as they looked to make an early breakthrough and were rewarded on nine minutes as Ben Youngs sent a lovely grubber kick through the centre of the Irish 22. Johnny Sexton failed to gather the ball inside his own in-goal area allowing George Ford to pick up the ball and touch-down.

Owen Farrell slotted the conversion to make it 7-0 in what was a dominant start by the hosts.

Ireland had a chance to get on the scoreboard a couple of minutes later, but Sexton scuffed a penalty kick wide.

They were made to regret that miss as the home side came powering back, not allowing Ireland to gain any territory and got their second try of the game on 25 minutes. Ford chipped a kick over the top which Jacob Stockdale hesitated to gather which gave Elliot Daly the opportunity to pounce on the ball and score. Farrell again converted to stretch the lead out to 14-0.

England continued to dominate and Farrell extended their lead to 17-0 with a penalty kick just before half-time and that’s how they went in when the whistle was blown moments later with Ireland facing an uphill battle to get anything from the match in the second period.

Ireland needed a response and they got it early in the second-half as they came out a different side, mounting a number of meaningful attacks, winning penalty after penalty in the English 22.

They took their time but they eventually managed to get over the line as Robbie Henshaw barrelled over from close range. Sexton made a mess of the conversion leaving it at 17-5 with 50 minutes on the clock, but it gave Ireland some hope heading into the final half an hour.

However, the visitors couldn’t continue their good start and it was England who scored next with their third try of the game just past the hour mark as replacement hooker Luke Cowan-Dickie drove over the line off the back of a line-out maul. Farrell was once again perfect from the tee to push his side 24-5 in front.

Ireland played better over the remaining 20 minutes and managed to get a consolation try through Andrew Porter, who burst over the line after a number of phases. Replacement scrum-half John Cooney knocked over the conversion to make it 24-12 come the full-time whistle.

Next up for England is a clash with Wales where they could seal a Triple Crown, while Ireland host Italy as they look to try and maintain a title tilt and will want to improve on their poor showing today.

The Ireland coaching group will retain a 24 man panel for the two day mini-camp on Thursday and Friday this week at the IRFU High Performance Centre at the Sport Ireland Campus.

There were no additional injury concerns following the match against France and the players (Burns, Healy, Henderson) who were removed for HIAs will follow the appropriate protocols this week.

The three players who provided specialist cover at the Aviva Stadium on Sunday – Harry Byrne, John Cooney  and Eric O’Sullivan– have also returned to their respective provinces.

All members of the Ireland squad and backroom team undertook routine PCR tested on Monday producing no positive results.  The group will undergo further routine testing  again this week as per our protocols.

The Ireland coaching group have named the side that will face France in round 2 of the 2021 Guinness Six Nations Championship.

There’s a new half-back pairing, a new captain a cap record in the front row and one uncapped player on the bench.

Ireland captain Johnny Sexton and vice-captain James Ryan have not hit all their markers this week in the return to play protocols so are not considered for selection.

Ulster’s Iain Henderson will captain Ireland for the first time, becoming the 108th player to lead Ireland. He will be partnered in the second row by Tadhg Beirne.

The front row that started against Wales of Cian Healy, Rob Herring and Andrew Porter is retained. Healy will win his 106th cap taking him ahead of John Hayes (105) as Ireland’s most capped prop.

In the backrow Josh van der Flier and CJ Stander are joined by Rhys Ruddock who slots in on the blindside flank.

Conor Murray picked up a hamstring strain in training this week and has been ruled out of this game. Jamison Gibson Park comes in to start at 9 and will partner Billy Burns.

Robbie Henshaw and Garry Ringrose line out in the centre and the back three is unchanged with  Hugo Keenan at fullback flanked by  Keith Earls and James Lowe.

There are four changes in the replacements as Ed Byrne, Ultan Dillane, Ross Byrne and the uncapped Craig Casey come in while Ronan Kelleher, Tadgh Furlong, Will Connors and Jordan Larmour complete the bench for the weekend.